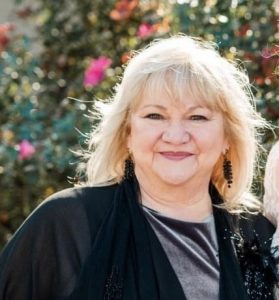 She is survived by her husband, Barry Kimbro; her sister Jackie (Phil) Higdon; son, Gabriel (Heidi) Kemp, and their 2 children Parker and Kennedy; son, Will (Kendra) Kimbro, and their son Charlie; son, Scott (Brittney) Kimbro, and their son Carver; and many more family members and loved ones. She is preceded in death by her parents, William Anderson and Stella Anderson (Rigsby), and brother Gene.

Deb was a Kentucky native graduating from Metcalfe County High School in 1970. She then went on to graduate from Kentucky Baptist School of Nursing where she began work as one of the first groups of registered nurses in 1973 with Louisville Emergency Services. Later, she began traveling with a local band as the lead singer, landing her in Nashville, TN. It was here that Deb spent the remainder of her nursing career working at Vanderbilt University Medical Center serving in the emergency department, as a Flight Nurse, and eventually as a physician liaison. While at VUMC, she was fortunate enough to become the lead singer of a unique band made up of Vanderbilt nurses, surgeons, and administrators called “Soul Incision”. They had the opportunity to play both locally and nationally, giving Deb the chance to sing alongside some of Nashville’s most notable musicians such as Vince Gill, Charlie Daniels, Blue Miller, and Pat Buchanan.

Deb was the most loving and devoted wife, mother, grandmother, sister, and friend. Her greatest joy in this world was caring for her grandbabies each day and loving them fully and intensely. She enjoyed jeeping, camping, relaxing in the hot tub, and laughing with her husband Barry. She had fun every single day and was never in a sour mood. She was a caregiver to anyone in need and showed love to everyone who crossed her path. She loved to sing, dance, and show her *DIVA DEB* side any chance she got. She was an amazing cook and enjoyed doing so in her brand-new kitchen that she designed and enjoyed in her retirement. She loved Hallmark movies, especially at Christmas which was her favorite time of year. Her dogs were like her children and she spoiled them rotten (rightfully so). She enjoyed being in Gatlinburg with her family when the snow fell in late fall. She was full of energy and joy that radiated through everyone lucky enough to have known her.

Donations can be made to Monroe Carel Jr. Children’s Hospital at Vanderbilt. In lieu of flowers, the Kemp-Kimbro family requests that you embody Deb’s livelihood and spread joy every single day.