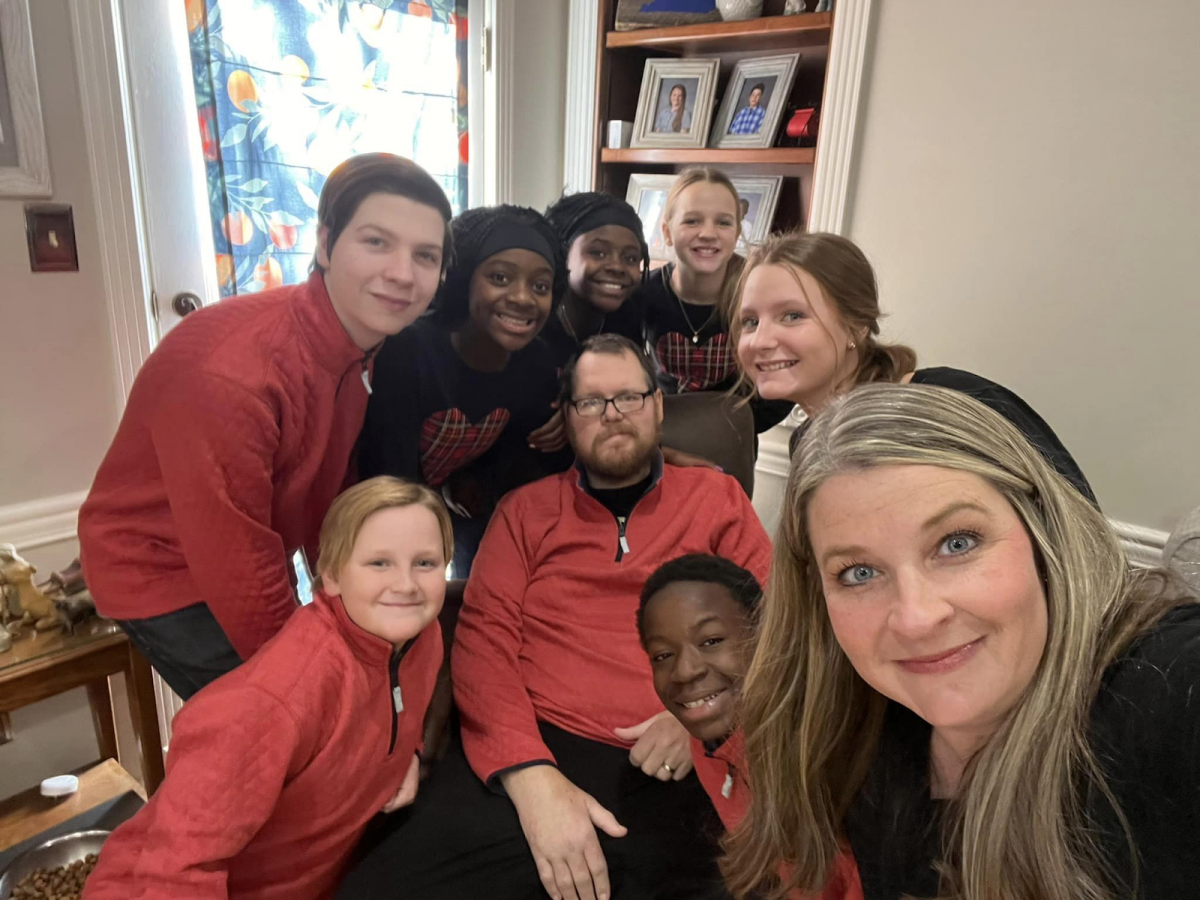 Kevin and Julie Melloan are pictured here with their seven children, Ava Grace, Graham, Ruby, Jackson, Lucy, Matilda, and Crosby. As Kevin rehabs from a hemorrhagic stroke, which had previously put him in critical condition, family and friends rallied around the Melloans to help in their time of need.

Former Hart Countians Kevin and Julie Melloan have certainly undergone one of their most difficult years. With the help of family, friends, and a strong faith, they have managed to remain positive and look toward 2023 with renewed courage and determination.

Kevin, son of Dale and Becky Melloan, was raised in Hart County, alongside his brothers Kyle and Justin. After graduating from Hart County High School in 1998, Kevin studied History at the University of Kentucky. In 2003, he married his wife Julie, and the two began their lives together.

Ruby, Jackson, and Lucy were welcomed into the Melloan family when they were adopted from The Congo.

From basketball, soccer, bowling, and baseball, to school fundraisers, carpools, and academics, the Melloans have always had their hands and their hearts full.

Then, on September 11, tragedy struck. Forty-two-year old Kevin suffered from a hemorrhagic stroke, putting him in critical condition.

Over the coming months, family and friends surrounded the Melloans with support, love, and prayers as Kevin fought his way back, with Julie by his side.

Hart County’s Pleasant Valley Church, where the Melloans have family ties, even raised funds to help with any immediate financial needs the family might incur.

Step by step, Kevin improved, first achieving the milestone of having his trach removed, and then transferring to Cardinal Hill for rehab.

Julie’s job within the UK College of Pharmacy allowed her to work virtually from the hospital so that she could be near Kevin. Thanks to supportive family and friends, the Melloan kids were able to continue with sports and after school activities as usual.

Two months after his stroke, on November 17, Kevin was able to come home. The Melloan children were already willing to do whatever it took to assist Kevin in his recovery. 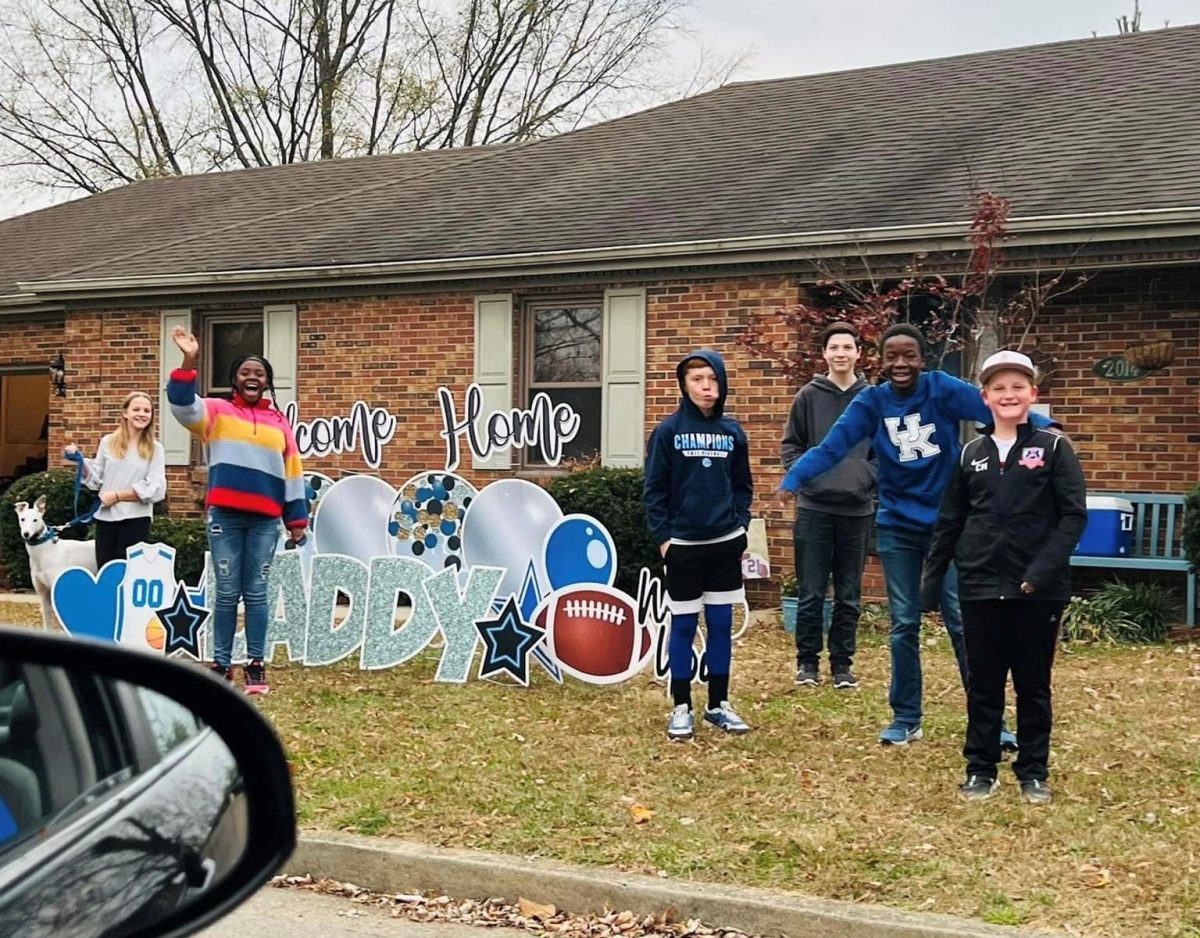 Kevin Melloan received a royal welcome when he was finally able to come home two months after his hemorrhagic stroke.

There’s a very famous quote that says, “Happiness is when you realize your children have turned out to be good people.”

Kevin and Julie are discovering that as they’ve raised their seven children. They also instilled in them the compassion and responsibility needed to step into this new role in their lives. They’ve been more than equipped to help their father on his road to recovery.

Ava Grace (17) is the oldest and a  junior in high school. She plays soccer and basketball.

“Thankfully, Kevin has been able to watch most of her games on TV, and then he enjoys her coming home to give him the play by play,” explained Julie. “She’s been extra helpful the past few months by helping the younger kids with their homework.”

Graham (14) is a freshman at Henry Clay High School. He is currently on the bowling team and enjoys high school. Julie describes him as the calm to their chaos, and at 5’9”, he has been a big help assisting Kevin around the house.

Ruby (15) is in the eighth grade and plays basketball and soccer.

“She is so kind and thoughtful,” began Julie. “Several times a day, I hear her ask, ‘Daddy, is there anything you need?’, and she loves to help make dinner.”

Jackson (14) is a seventh grader. He plays soccer and has been going to all of the basketball games to cheer on his siblings. He also pitches in by walking the family’s retired greyhound, Nolan.

“I could not have made it through the past few months without him,” Julie explained in a social media post in celebration of his January birthday. “He takes care of so many things to help me. (He) put the Christmas lights up, keeps a running grocery list, plunges toilets, walks the dog…There are things popping up that I don’t even know about because he just takes care of them. One of his favorite hobbies is drawing pictures of peoples’ houses and giving them as gifts. He recently gave one to our neighbor who is a widow, and it meant so much to him that she framed it and hung it up. He is kind, thoughtful, hilarious, and a friend to everyone!”

Lucy (12) is in the sixth grade. She plays basketball and soccer. Julie describes her as the girl who keeps them laughing and also is Kevin’s biggest cheerleader.

“Every day she asks him how he did in therapy and then she tells him ‘Oh, wow, Daddy, you are doing great!’” said Julie.

Matilda (11) is in fifth grade. She plays soccer and is preparing to audition for the school musical. Julie explains they call her the family cruise director. She and the other kids put on lots of shows for the family. When Kevin came home from his time in Cardinal Rehab, Matilda made homemade slime for him to use for hand exercises.

Crosby (9) is in fourth grade. He plays basketball, soccer, and baseball. He loves to talk sports with Kevin and share all of his sports trivia facts. He also keeps the family entertained with magic tricks and games he invents.

The Melloan Family’s GoFundMe, which was organized by Julie’s brother, Brad Steffen, has reached $42,917 of its $50,000 goal. A meal train was also created back in the fall to assist with meals for the family.

“We have had so many people supporting us through the meal train, gift cards, friends getting the kids to their games and practices, and even running errands for us,” said Julie. “So many people have jumped in to help us so that I can focus on taking care of Kevin. He gets PT, OT, and Speech three times a week at home, and he is making great progress. He’s really stayed so positive through everything, and he is working hard to regain his strength.”

As the Melloans head into 2023, they do so with renewed faith in perseverance and complete healing. Though they will continue to travel the road to Kevin’s recovery for some time, there is no doubt their family will collectively face and overcome any obstacle they come across, and they certainly have a large support system behind them.

The American Stroke Association recommends using the letters in F.A.S.T. to spot a stroke, which stand for Face Drooping, Arm Weakness, and Speech Difficulty, while the “T” stands for Time to Call 911. Other symptoms of a stroke could include numbness, confusion, trouble seeing, trouble walking, or a severe headache.