The horse saga gets a little deeper as former County Judge-Executive Micheal Hale and his wife, Shani have taken legal action against the county, claiming they are owed $17, 168.10 for caring for one of the “seized” horses that they took to their private residence, in lieu of returning it to the State Park with the herd of nine horses on May 13, 2020.

The magistrates authorized Hale to enter an agreement with the Kentucky Department of Parks in April 2020 to allow the horses to be boarded at the Barren River State Park Riding Stables eliminating the expense from the private, sole source contract awarded by Hale to Steve Bulle. It was expected that all nine horses would be returned to the stables.

However, the Barren County Progress reported that only eight horses were returned to the stables. Many questions were asked before field research confirmed that the American Quarter Horse was at the Hales’ private residence. When confronted about the horse, Hale said he “adopted” it.

Can a county judge-executive “adopt” forfeited property and take it to his private residence? Readers will recall the horses were seized without a court order and the alleged owner forfeited the horses in a guilty plea to resolve the case. No chain of custody was ever established.

Shani Hale went to social media explaining they “adopted” the horse because it was smaller and needed special attention. “We have bought feed, mineral and hay for the horses out of our own pocket. The cost to taxpayers has been minimal, if any.” Now the Hales want to saddle the County with a bill totaling $17,168.10 for feeding and keeping the same horse.

“Instead of letting her die or putting the financial burden on the county, we adopted her… So, she is MY HORSE and my financial responsibility and my vet (Dr. Steve Webb) will back me.” (Shani Hale, FB post, April 19, 2022.)

At no point during 2020, 2021 and 2022 did the Hale’s submit invoices to the County for payment for boarding or caring for the horse. Elected officials and their families cannot gain anything monetarily from County money and in no circumstances could the County Judge-Executive award a contract to himself and without the concurrence of the Fiscal Court magistrates.

In a text message with the Editor, County Attorney Mike Richardson confirmed there is no contract with the Hales for the boarding of a horse. Likewise, County Judge-Executive Jamie Byrd confirmed there are no outstanding invoices owed to the Hales.

The Hales hired Louisville attorney Katie M. Brophy of Batey, Brophy and O’Dea Law Firm who filed a Lien Statement with the County Clerk, Helena C. Birdwell on January 3, 2023, just three days after Hale left office. It is unknown why they did not use their former attorneys.

“I foresee the sheriff coming to the house and removing the horse,” said Hale during his last Fiscal Court meeting on December 20, 2022. He further admonished that he had kept the horse for 18 months, saving the county $7,000 – 8,000 in lodging, plus medical bills. “We haven’t asked for a dime of that back.”

Three days later, he did.

In the filing, Brophy cited KRS 376.080 and placed the lien on a “Quarter Horse Mare, approximately 30+ years of age and named Taye(a), chestnut in color with white star on forehead and partially white nose.”

The lien stated “The materials furnished, and the labor was performed under contract with the owner, Barren County Kentucky.”

So, how did this transition from the Hales “saving the county money” to the taxpayers owing them $17,168.10”? Perhaps this was an attempt to circumvent the sheriff from seizing the county property as it is now a civil matter. Perhaps this was an attempt to distort the fact that he took forfeited county property to his home with no authorization to do so.

Liens are not unusual when providing a service and the contractor refuses to pay a bill. However, in this case, there is no contract and the Hales did not submit any invoices for payment for 18 months. Did they make any good faith efforts to collect payment during this time? Additionally, Hale did not address this issue in his final Fiscal Court meeting or any prior Fiscal Court meeting.

The Progress reached out to Attorney Gary S. Logsdon who represents Brittany Turner, the owner of the seized horses. “It is interesting to note that Hale’s attorney filed the Lien citing KRS 376.080 instead of KRS 376.400 which authorizes the filing of an Agister’s Lien for the keeper of a livery stable or agister for the care of any livestock.”

“This Statute is the solitary authority in Kentucky permitting the filing of Liens related to livestock. It outlines specific steps which must be taken including a requirement that the owner (presumptively, Barren County) must be at least forty-five (45) days in arrears.”

“County Attorney Richardson and County Judge-Executive Byrd have confirmed there is no contract and no arrearages. Additionally, county policy requires monthly submissions for reimbursement of expenses to be paid by the county. Hale knows this stuff.”

Logsdon expressed his consternation by the apparent erroneous application of KRS 376.080 when the law is abundantly clear that The Agister’s Lien Statute controls situations such as that presented by the Hale’s Lien filing against the county.

Another point of interest is the fact that Hale stated the valuable horse is “weak and on its last leg.” This raises more questions as to the care it was receiving.

On September 9, 2019, Dr. Steve Webb completed an assessment of the nine horses. He did not note any specific concerns to this horse, nor did Animal Control Officer Shelley Furlong’s handwritten notes indicate any issue with the health and welfare of the horses. Yet nine months later, it is “special needs” and must be segregated to the Hale’s farm. (See the letter here from Dr. Webb previously published in the Barren County Progress Horse Owner Speaks – Jobe for Kentucky (jpinews.com))

The Animal Clinic has refused to answer questions relating to the care of the horses, citing HIPPA compliance. Barren County Progress obtained copies of the invoices from the Animal Clinic that were submitted to the county for reimbursement. We cannot verify that Dr. Webb was at Steve Bulle’s farm to treat or assess the American Quarter Horse before it was moved to the Hales’ residence.

Filing a false lien is a Class D felony. As the saga continues, the new administration faces a new twist.

We will continue to cover the story.

Editor’s Note: The citizens and taxpayers deserve answers. We printed the photos of the horses the day they were seized. We printed the Veterinary Assessment from Dr. Webb that was completed the day the horses were seized. We have analyzed every invoice from Steve Bulle and the Animal Clinic. We want the truth as to why Hale took the American Quarter Horse to his home. Was the American Quarter Horse the reason the horses were seized in the first place without a court order and without interviewing the owner? We will continue to hold our government accountable. 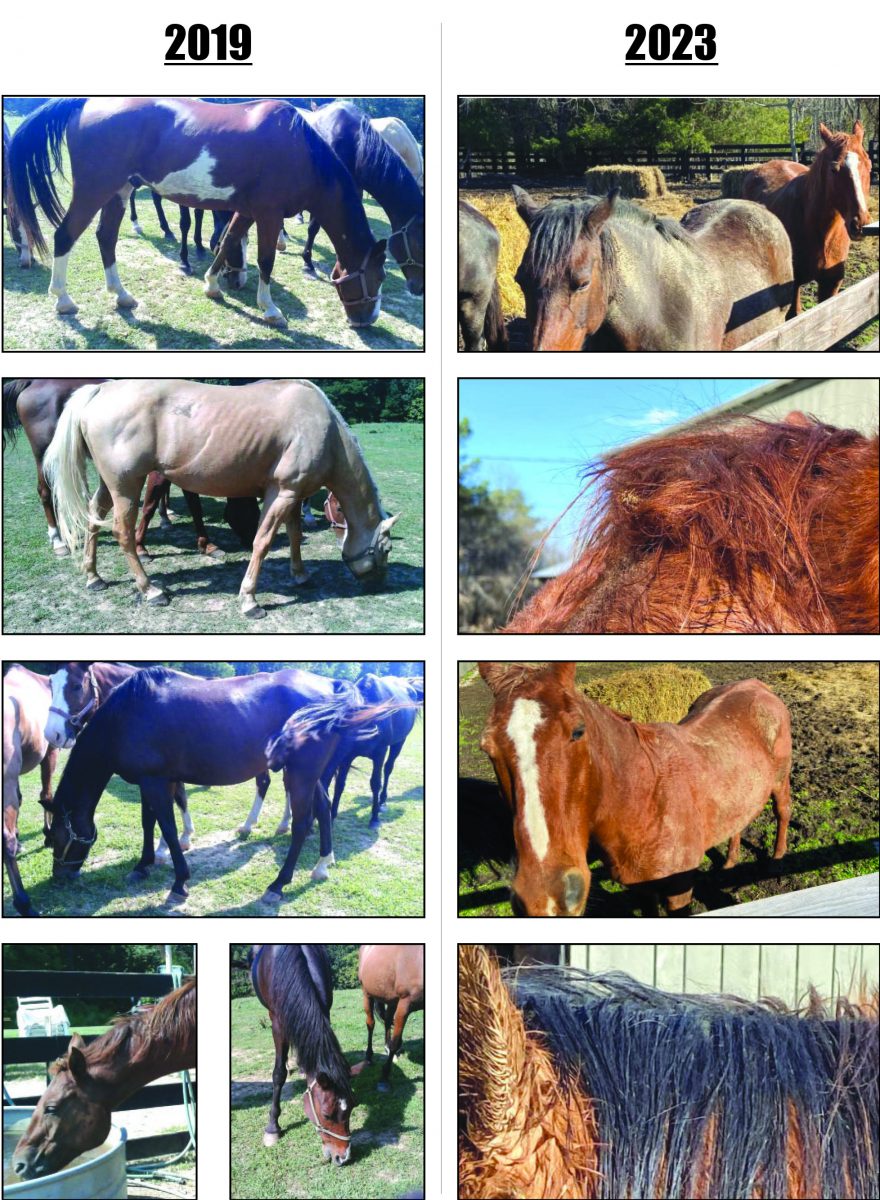 Photographs provided by Animal Control taken in September 2019 when the horses were removed from the Barren River State Park compared to photos taken when the new administration came into office early in January 2023 are shown below. In the Sept. 10, 2019 letter from Veterinarian Steve Webb, he notes, “Several of the horses had large numbers of cockleburrs in their manes and tails indicating a lack of grooming on a routine basis.” In the original photographs, cockle burrs cannot be immediately seen. However, some still have cockle burrs that are embedded in the manes and tails currently, indicating routine grooming maintenance has continued to be less than adequate over the prior 3 years. When they were removed, the county was making reference to how they were not being maintained, however, the horses appear to not be aging well, even under the county’s care since 2019. They certainly do not appear as attractive the day they were removed from the park. They have, however, maintained their sweet personalities. 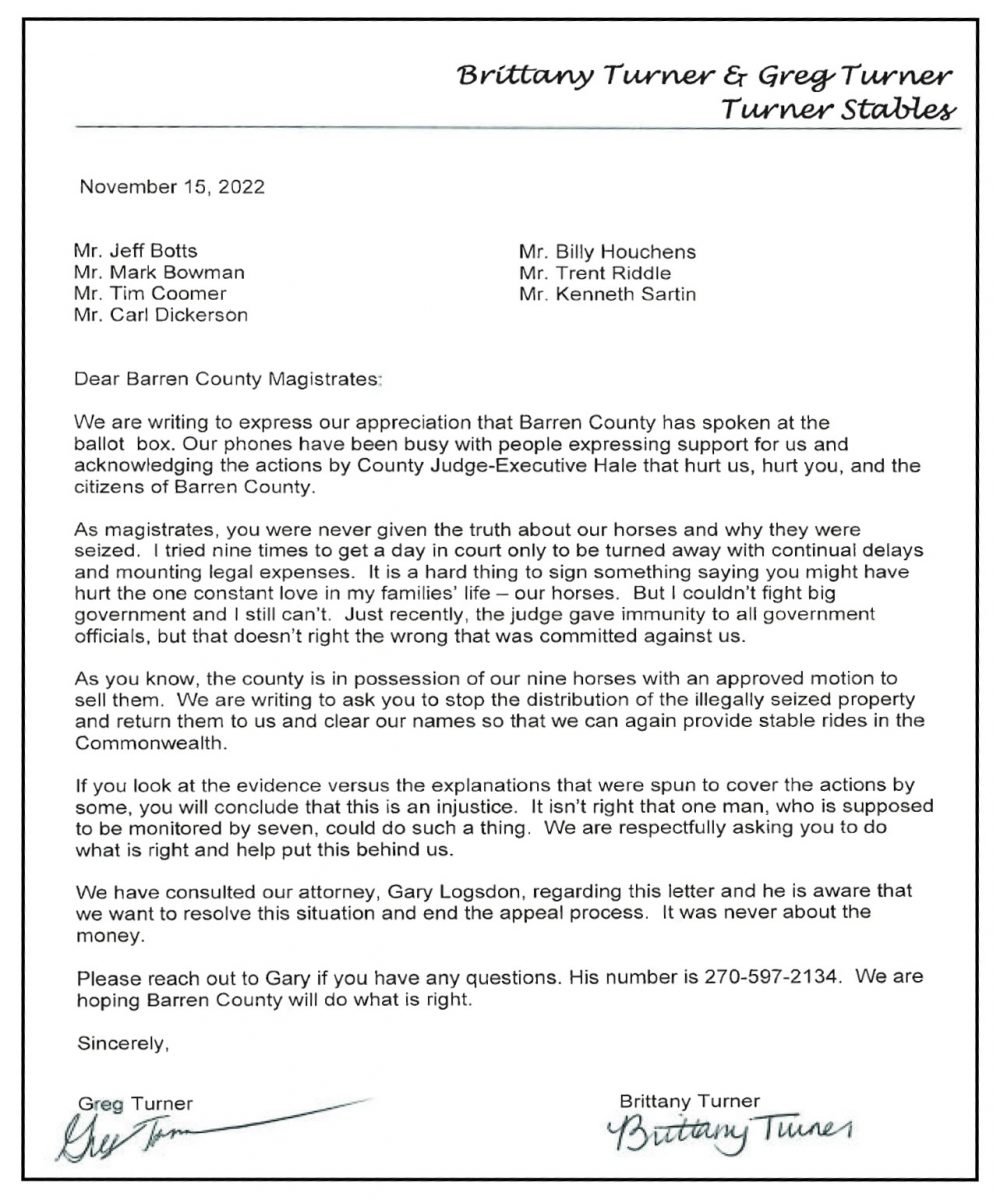