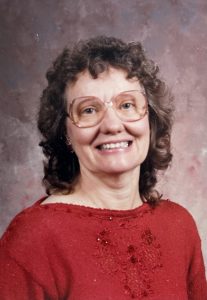 LOUISVILLE – Aleda Butler Pierce, 92, went home to be with Jesus on Tuesday, December 20 at Baptist East Hospital. She was a former resident of Frankfort. A native of Sulphur Well, KY, and the daughter of the late Horace and Ettalynn Cummins Butler and daughter-in-law of the late William Arnold and Maple Curry Pierce. Aleda was a niece of the late Wendell (Edna) Butler, Stanley (Harriett) Butler, Thomas (Geneva) Butler, Morris (Bobby Jean) Butler, and Polly (A.K.) Farmer.

Funeral services will be held in Louisville on Saturday, January 14, 2023, at Southeast Christian Church (920 Blankenbaker Pkwy) in the Chapel Room at 3:00 with visitation at 2:00; and on Sunday, January 15, 2023, at Crestwood Baptist Church in Frankfort (1006 E. Main St.) at 2:00. Burial will be on Monday, January 16, 2023, at 10:00 in the Frankfort Cemetery. LeCompte Johnson Taylor is handling arrangements. Please visit our website to leave messages of condolences.