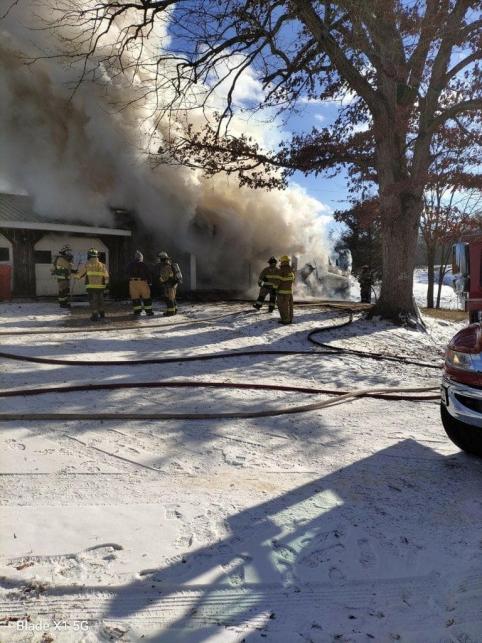 A local family of five lost everything in a house fire on Christmas Eve. Jay Thompson and his family rented the home located at 368 Mell-Cork Road.

The Edmonton-Metcalfe Volunteer Fire Department responded to the fire and Fire Chief Troy Clemmons confirmed the house was a total loss.

Jay, and his girlfriend, Heather Moran, have two sons, ages 13 and 11, and a 9-year-old daughter.

“We were told the temperature dropped so low that the wall heaters kicked on automatically and we didn’t even know they would do that,” Jay said. The family has lived in the home for five years and this has never happened before, he said.

By the time Jay and Heather arrived at the residence, it was already starting to fall in and they knew there was no way to save it.

“The good thing is there were no injuries and everybody is okay,” Jay said.

Jay said he has been amazed at the help received already from people around the community and the family is very appreciative of all of those who have reached out to help.

“People I’ve never met have even come up to me asking how they can help,” Jay said.

The family is rebuilding their lives from the bottom up and will need help obtaining beds, furniture, appliances, and other items.

A gofundme account has been set up for the family where monetary donations can be made: https://gofund.me/368aa368

The description on the fundraising site says the family and their dogs were not home at the time.