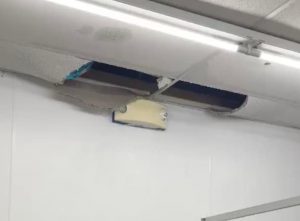 The Edmonton Dollar General Store was closed for four days following a ceiling collapse in the men’s bathroom as a result of a frozen water line that had burst on Christmas Eve. The frigid temps led to the damaged pipe, which caused water to flood the area. Many shoppers were finishing their last minute items before Christmas when they were evacuated until repairs were complete. They reopened on Dec. 28th at 2:00 p.m.