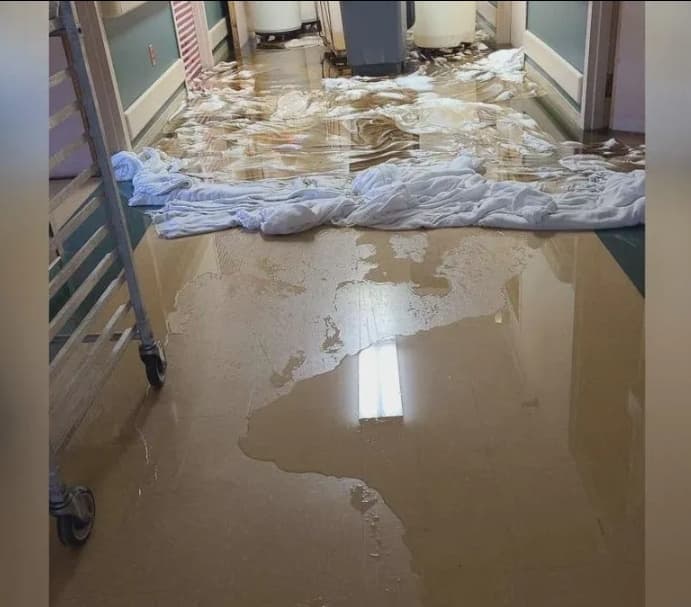 On Christmas Eve, a tremendous amount of volunteers, staff, and personnel rallied around the residents of the Metcalfe Health Care Center (MHCC) following multiple water leaks in the facility.

The evacuation was due to a water line bursting in the facility following continued “artic’ freezing temps over several days.

Around 11:30 AM on Dec. 24, an initial leak began in the nursing home and was isolated to a medical records office, and the facility maintenance supervisor and licensed plumber worked together to repair the pipe.

However, multiple leaks began in the west portion of the facility, and residents were moved to other unaffected portions of the building.

Additional leaks continued to spring up leading to a coordinated effort between staff and Metcalfe County Emergency Management personnel to make the decision for a total evacuation.

The water line break caused the ceiling to fall in, which is what caused the flooding inside.

Both Gary Fancher and Emory Kidd with the local emergency management assisted in the evacuation efforts and a Declaration of a Local State of Emergency was declared and signed by Judge/Executive Harold Stilts. The declaration can be used for FEMA assistance if enough damage occurs statewide from the cold weather, explained Kidd, Director of Metcalfe Emergency Management.

Some families chose to take their family members (residents) home that were capable while others were transferred to surrounding counties.

Sixty-two residents were evacuated and MHCC Administrator Cody Brooks said those who did not return home temporarily were close to the number of available beds between the other facilities.

“Administrators and leadership in all the facilities have been extremely helpful and accommodating, the care for the residents, which is our priority, has been great and the residents are doing well,” Brooks said.

Brooks said plans to transport the residents back to the nursing facility aren’t too far away, however, he said some work remains including inspections from the Office of Inspector General to assure the facility is ready for their return in a couple of weeks or less.

Volunteers, facility administrators and staff, emergency management, first responders, EMS personnel, and all of those who stepped up to assist MHCC with their unexpected evacuation chose to step in and help even in the midst of their own family Christmas gatherings.

Brooks said he cannot express how grateful and appreciative he and the staff at MHHC for all the assistance provided by so many people.

“The most important thing is that all of our residents and staff are safe,” Brooks said.

“It just goes to show you we are kind of all one big community,” Brooks said, “County lines do not separate our mission when it comes to caring for people and this turn of events is proof of that.”