Charolette Lopez shares a conversation with Eddie Price as he autographs her new book, written by Price. Photo by Allyson Dix

Eddie Price gave a “Christmas in the American Colonies” presentation at the Metcalfe County Public Library where he detailed the early colonial days and the history of Christmas as it began in America.

His speech was captivating with screen projector slides for photographs giving a visual glimpse of those early days as he told the story of Christmas and how some of those customs and traditions have trickled down through today.

Price began by recounting the history of customs and beliefs within England’s Catholic Church and how it relates to Christmas.

He spoke on how Christmas wasn’t brightly lit festivities, Christmas trees, cards, or a multitude of gifts on Christmas morning. And though soft chuckles could be heard from attendees, some of the historical parts were somewhat unsettling if you had lived in those days.

With the immigration of many different religious and ethnic beliefs from England to America, it was, and perhaps still is, a contentious matter—proving the “War on Christmas” carries back centuries ago.

Price, who was accompanied by his wife, Mary, and both dressed in colonial attire, said the Puritans in the New England Colonies were very much opposed to celebrating Christmas.

In fact, laws were passed making those who engaged in such happiness would face criminal charges and five-shilling fines. It was a forbidden activity to engage in feasting, closing of stores and schools, or holding church services in honor of Christmas. Puritans believed Christmas festivities had pagan roots.

Price added that laws being passed to punish those who celebrated Christmas were proof that some were celebrating the holiday.

However, Presbyterians started coming around to the idea of Christmas being a day set apart from the others when they noticed some of the members observing Christmas in the Anglican Church.

Still, in the Middle Colonies, Germans and Dutch settlers brought to America more lively and festive celebrations such as baking and in the 1800s, the Christmas tree was born in America—a custom brought over by Germans.

In spite of that, as late as the 19th century even, laws forbidding any noise in the streets at Christmas that would suggest the holiday was a happy one and one worthy of celebration were passed.

Moving south, way south to the Southern Colonies, which were made up of Maryland, Virginia, North and South Carolinas, and Georgia, Price described their celebrations as being full of happiness and joy.

Dancing, hunting, visiting of friends and family, and church services were some of the ways in which they celebrated Christmas.

Churches, homes, inns, and taverns also decorated with greenery using some of the things we use today like holly, mistletoe, and rosemary!

December 25th started the festive season and lasted through Jan. 5th—which is technically tied to the roots of “The Twelve Days of Christmas” carol.

Ultimately, in the southern parts of Colonial America, it was completely legal to devour their mince pies and plum porridge, unlike their counterparts in the north.

He said the Anglicans, Lutherans, and Roman Catholics planted the seeds of Christmas in Colonial America.

Price laid out the groundwork perfectly for understanding the history of America’s Christmas giving specific diary entries from long ago in his research and specific incidences where violence was chosen over the holiday. Many, many more examples and details than written here were delivered in his speech.

Price, with his charismatic persona and knowledge of history, kept even the youngest attendees engaged for the hour-long presentation.

Price, a Kentucky native, is a retired history teacher and the author of several books including the award-winning novel Widder’s Landing. His most recent novel is An Unlikely Trio—The Winners of the 1913 Kentucky Derby. He also writes children’s books.

Visit www.eddiepricekentuckyauthor.com for more information on him as well as to schedule him for upcoming presentations—he travels many miles to deliver his wealth of history and knowledge on a variety of topics.

The good news is Christmas is still celebrated today! 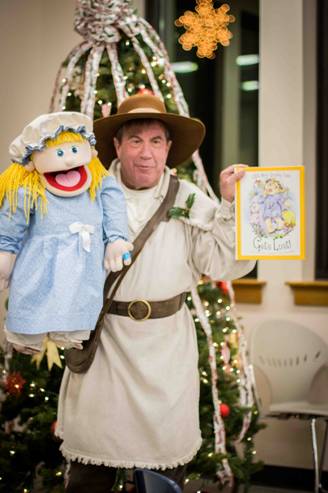 Award-winning Kentucky author Eddie Price visits the Metcalfe County Public Library to detail what Christmas was like in the Colonial days. Photo by Allyson Dix