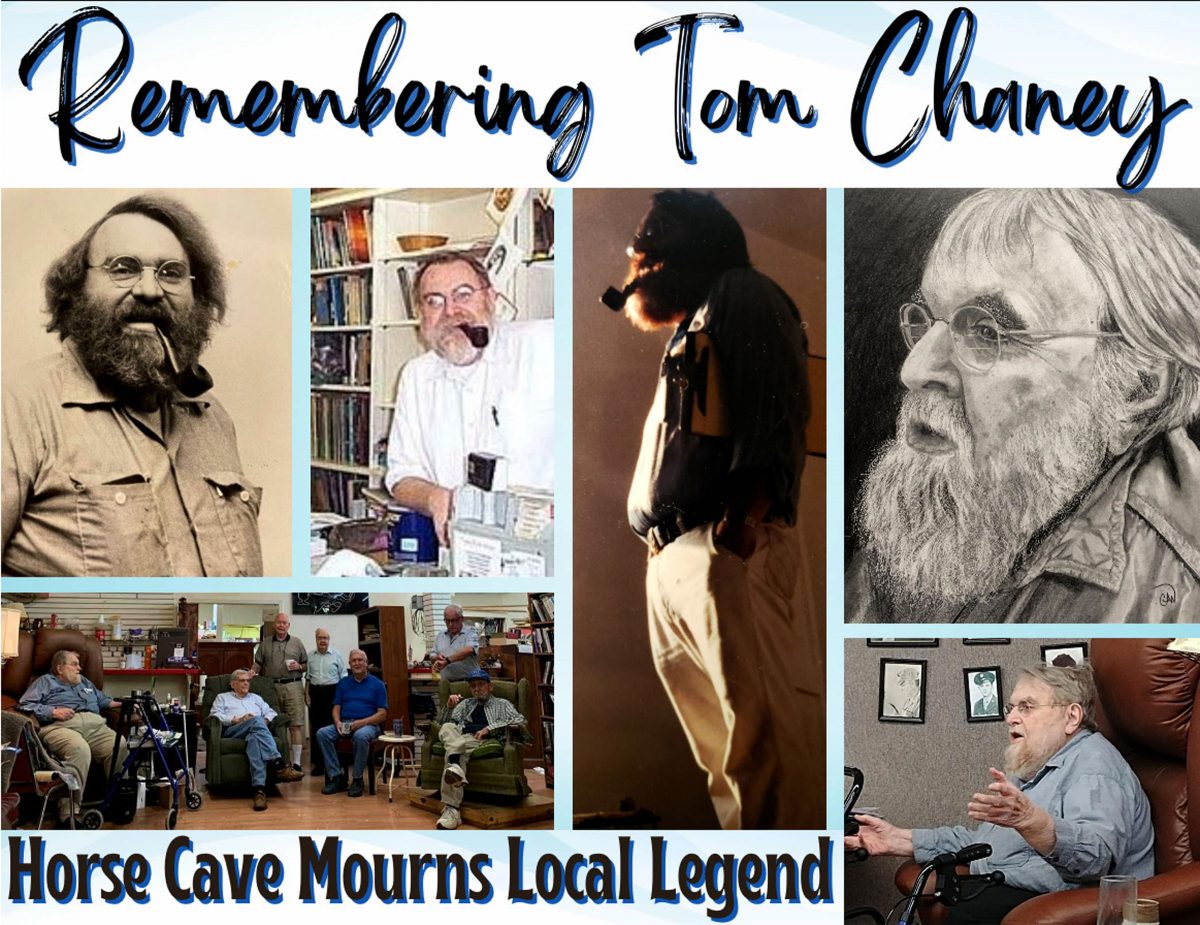 If you ask anyone who has ever graced the sidewalks of downtown Horse Cave in past years, there’s a good chance they found themselves in The Bookstore and face-to-face with a man full of witticisms, historical facts, and stories to tell. That man would have been none other than Tom Chaney.

Tom could easily be described as Horse Cave’s own son, a local legend if you will, but he truly made a name for himself everywhere he went. After graduating from Caverna High School in 1956, Tom could be found in a variety of places and boasting a variety of titles. From Arkansas and Iowa to Pennsylvania and right here in Hart County, Tom has been a teacher, a reporter, a marriage officiant, and a construction worker. He was even at one time a farmer, of which landed him quite the adventure and no doubt a one-of-a-kind story he loved to tell.

Although Tom was a traveler and could have easily planted his roots anywhere, Horse Cave was home. It was a place of importance for Tom and, likewise, Tom was an important part of Horse Cave.

Along with his sister and brother-in-law, Ann and Jerry Matera, Tom opened The Bookstore and The Bookstore Cafe. It was a place where everyone was welcome to enjoy delicious food, a good book, and even an impromptu wedding.

Although Tom is physically gone from Horse Cave, his friendly personality, plethora of local history, and impressive storytelling abilities will never be forgotten by those who came to know, love, and respect him.

“With running my shop and learning local history over the last seven or eight years here, Tom was a hidden treasure to have just a couple doors down from me that I could turn to for answers,” said Emry Riley, owner of A Walk Through Time. “Sometimes we would run across items from local businesses from the late 1800s to early 1900s that only a very few around could answer where those businesses were located in town, who ran them, and if there was still any relatives around. There was only one instant that I was able to stump him. A cheese box I have in my collection that reads on the top ‘C.H. Higbee Horse Cave, Ky’. Tom said he “assumed” the store would have been on Higbee Street here in town but had no knowledge of how long it would have been in existence. When a local historian dies like Tom, or any local elder person, the knowledge they carry is like a old house that burns down. Once it’s gone, a lot of the history it carries is gone with it. Same with Tom Chaney. He carried a ton of knowledge with him about our town, and now a lot of that is gone. I, like many others here, was fortunate enough to absorb as much of that knowledge as we could for the time we had him here.”
Horse Cave Mayor Randall Curry described Tom as “a true historian and a man of many talents.”
“Tom was proud of the town he grew up in and was always a wealth of knowledge whenever I had questions about the history of our area,” Curry said. “Glad I was able to visit with him for about two hours before he left for Minnesota that weekend. Will always treasure our friendship and will miss his humor and knowledge he had about Horse Cave and surrounding communities.”
Harold Cottrell first met Tom in 1967.
“He was going to UK that fall to teach English and work on a Masters Degree. I was going to start my freshman year there,” Cottrell said. “I accidentally ran into him the first week on campus, and we became friends immediately. Tom helped me grow out of being a naive farm boy from Hart County. Tom told me about a far-fetched dream he had. ‘We need to put a actor’s theater right in Horse Cave. I have always wanted to make this happen.’ Tom’s sense of humor and his ability to deliver a story was a true gift. He sincerely cared about people, and I have never known anyone to have as many friends as Tom. When I moved back to Munfordville, I was surprised to see Tom going to church regularly. When I questioned him, Tom said, ‘Well, the doctor told me I would have to quit smoking, quit drinking, and start going to church. I misunderstood the doctor and thought he said or instead of and.’ Tom Chaney is uniquely a one-of-a-kind character, and I will miss him greatly.”
Chelsea Ballard said Tom was a “wealth of knowledge for our local community.”
“I enjoyed visiting the bookstore as a child growing up a few miles outside of Horse Cave,” Ballard said. “When my mom was the director of the Horse Cave Library, I would walk around town to visit all the store owners and the cave. Tom always shared great stories, and I enjoyed eating in the restaurant when I was younger. Tom and his sister, Ann, inspired me to appreciate our local history and to dive into the research. I will always appreciate his unique personality and intelligence.”
A historian. A storyteller. An open-minded individual. A friend to all. Tom Chaney will forever be embedded as a local legend in Horse Cave, the community that he loved and which certainly loved him in return.