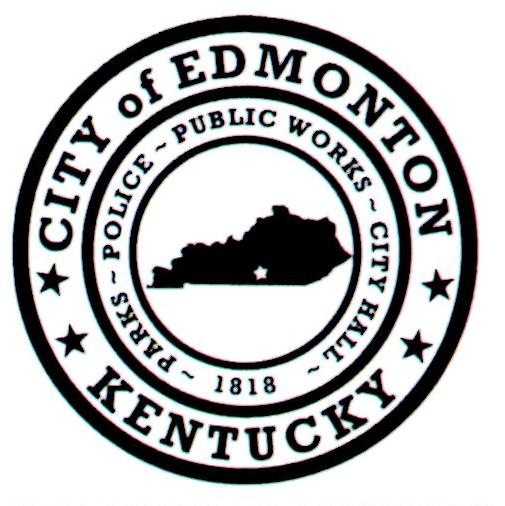 The Edmonton City Council met in a special session on Thursday, November 3rd.with everyone in attendance except City Attorney Brian Pack. The meeting was moved to the 3rd from the normal Monday date due to Election Day.

Mayor Doug Smith began the meeting by saying, “I would like to take this time to commend the first responders on the recent fire at Judge and Mrs. Emberton’s home and thank them for their quick response and professionalism shown during such a tragic event. A lot of times the ones left at the scene of such a tragedy to complete the task at hand goes unnoticed and I would like to say thank you on behalf of the family and let all first responders know that nothing done went unnoticed.”

The Water, Sewer, and Gas Department report was presented by Superintendent Moe Hensley. He relayed that the crew did the routine monthly jobs, replace the air conditioner in the senior server room of the 911 building, and replaced the big flag at the parkway.

Hensley also stated that leaf pick-up will continue every Monday through November.

The ABC report was presented by Fred Ray who stated, “Everybody has paid their regulatory fees for the last quarter.”

Park Director Brian Garrett gave the Park and Recreation report. Fall baseball and softball ended and so did little league football. The drive-thru trick-or-treat drew a big crowd and the first movie night had good attendance.

In other business, the Christmas Tree Lighting ceremony will be held on Sunday, December 4th following the Chamber’s Shop Around The Square event. The day will include caroling at the nativity scene at 3 p.m., live music at 4 p.m., and the tree lighting at 5 p.m.