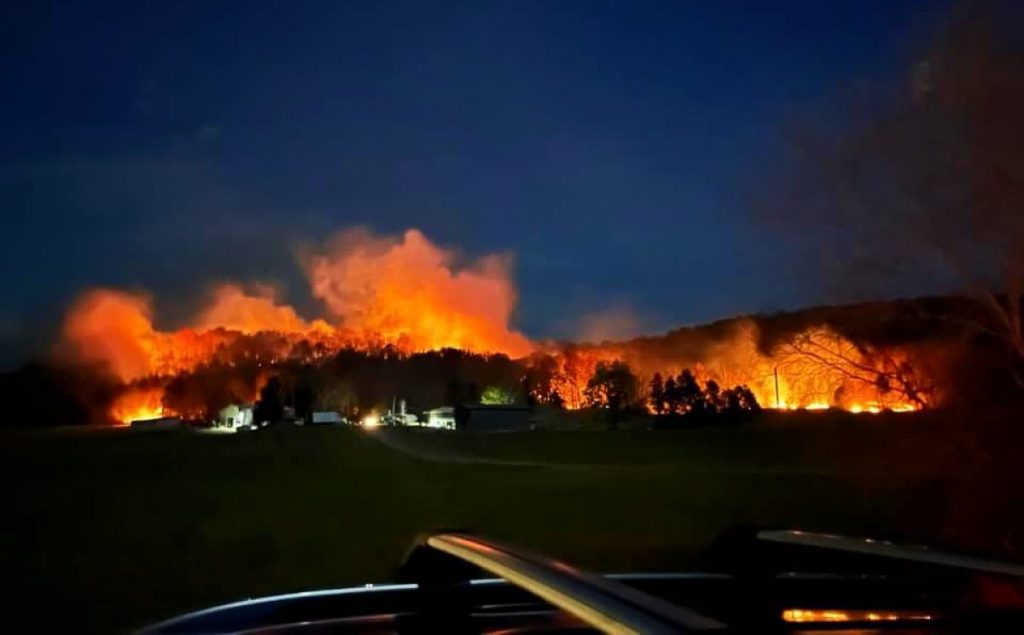 A fire along Davis Williams Road in the Northtown community of Horse Cave began late Friday night on November 4 and burned approximately 75 acres of a nature preserve. Photo by Carrie Rountree.

On Friday, November 4 at approximately 10:30 p.m., the Horse Cave Volunteer Fire Department responded to a call on Davis Williams Road in the Northtown area of Horse Cave.

A fire had engulfed a heavily wooded area of a nature preserve managed and operated by Western Kentucky University. That night, approximately 75 acres were on fire.

“It was called in as a small brush fire…That was an understatement, so we had Cave City Fire and Munfordville Fire and the Kentucky Division of Forestry paged in,” said Chief Adam Sloan with the Horse Cave Volunteer Fire Department. “Upon arriving on scene, we called in Hardyville Fire as well for mutual aid…We got Bonnieville as well to come down and help us. We had approximately 60 people of volunteer staff on scene.”

The first 75 acres of the nature preserve burned that night, November 4, and into the early morning hours of November 5. The fire was able to be contained by creating fire lines. This is done by digging a line with a bulldozer and going in with leaf blowers and rakes and raking back approximately an 8 to 10-foot-wide span down to the dirt. According to Chief Sloan, usually with a fire in a wooded area, it’ll burn up to that dirt and go out.

“We got that done probably around 3 o’clock Saturday morning, and we got control of what was burning then and contained into that fire line area,” Chief Sloan explained.

However, due to the high winds and leaf fall that happened on Saturday, rekindles occurred. On November 5, an additional 35 to 40 acres burned.

By the next morning on November 5, the fire in Northtown had been mostly contained. However, later that evening the fire rekindled due to wind and falling leaves, and an additional 35 to 40 acres burned. Photo by Kayla Rountree.

“We came back in and cut a secondary fire line, and we actually did a small prescribed burn (Saturday night) to get rid of that area of leaf clutter or fuel from the leaves, just to keep it from spreading over onto the Rountree farm,” Chief Sloan said.

Chief Sloan and others returned to the site consistently from Friday night through late Sunday night, cleaning up the inside of the burned area and ensuring the leaf fall didn’t block the fire lines.

On Sunday night, November 6, a prescribed burn under the supervision of the Kentucky Division of Forestry, Chief Sloan, and others occurred again to burn off what leaves fell Saturday during the wind. This was done to keep the fire from flaring back up.

“Anything that’s within 150-foot of a wooded area cannot be burned until after 6 p.m.,” Chief Sloan stated. “We of course followed that suit…At 6 o’clock, we lit. Right now (Sunday night), we’ve got a fire line that’s probably a quarter of a mile long that’s just starting to burn in the area.”

As for the cause of the fire, Chief Sloan said it is speculated that the fire was an intentional burn. In other words, someone set the fire.

“There’s not supposed to be anybody burning on this property or anything of that nature, but due to the fact that it was such a large area along the road front that was set (on fire) right off the bat, it kind of appears that somebody set it,” Chief Sloan said. “There’s no real way to prove one way or the other if it was arson or whatever, but it matches the characteristics of a fire that was set by someone.”

As stated earlier, the land is operated and managed by Western Kentucky University and is located in the Northtown area of Horse Cave. On the other side of the road across from the large piece of land is a farmhouse located at 2005 Davis Williams Road.

“That would have been on the opposite side of the road of the fire,” Chief Sloan explained. “Then along W. Walters Road, I believe is the right name, that branches off of Davis Williams Road, and there is a large farm out there that’s owned by Melvin and Kathy Rountree that has a large hay barn…We were worried about that side of the road catching (fire) initially that first night. That was our main concern was keeping it on the side of the road that was set so that we could stay away from the civilian land and on the land owned by Western, and we were able to maintain everything on Western’s property.”

“No structures were really in danger on Western’s property,” Sloan added. “We did have one barn that they use for like a tool shed that was close to the fire, and we had fire engines set up there, and we just kept spraying water on it just so that if it did get close to it there would be a wet line or a watered down area to where we could keep it off.”

With the 75 acres that burned Friday night, the additional 35-40 acres that rekindled and burned Saturday evening, and with the prescribed burn that occurred, Chief Sloan said that a total of 175 to 200 acres of the nature preserve had burned.

There was no damage to any surrounding civilian property or structures. This, Chief Sloan stated, was due to the hard work and effort put forth by the volunteer fire departments.

“We had a tremendous turnout from Horse Cave Fire Department, as well as all five agencies that came in and helped us,” Chief Sloan said. “The fire department and the City of Horse Cave is gratefully thankful for the mutual aid that we received from Hardyville, Cave City, Bonnieville, and Munfordville. Without that assistance, we would have lost a lot more acreage. I think everybody did a fabulous job working together, and it’s nice we were able to pull together and achieve our goal.” 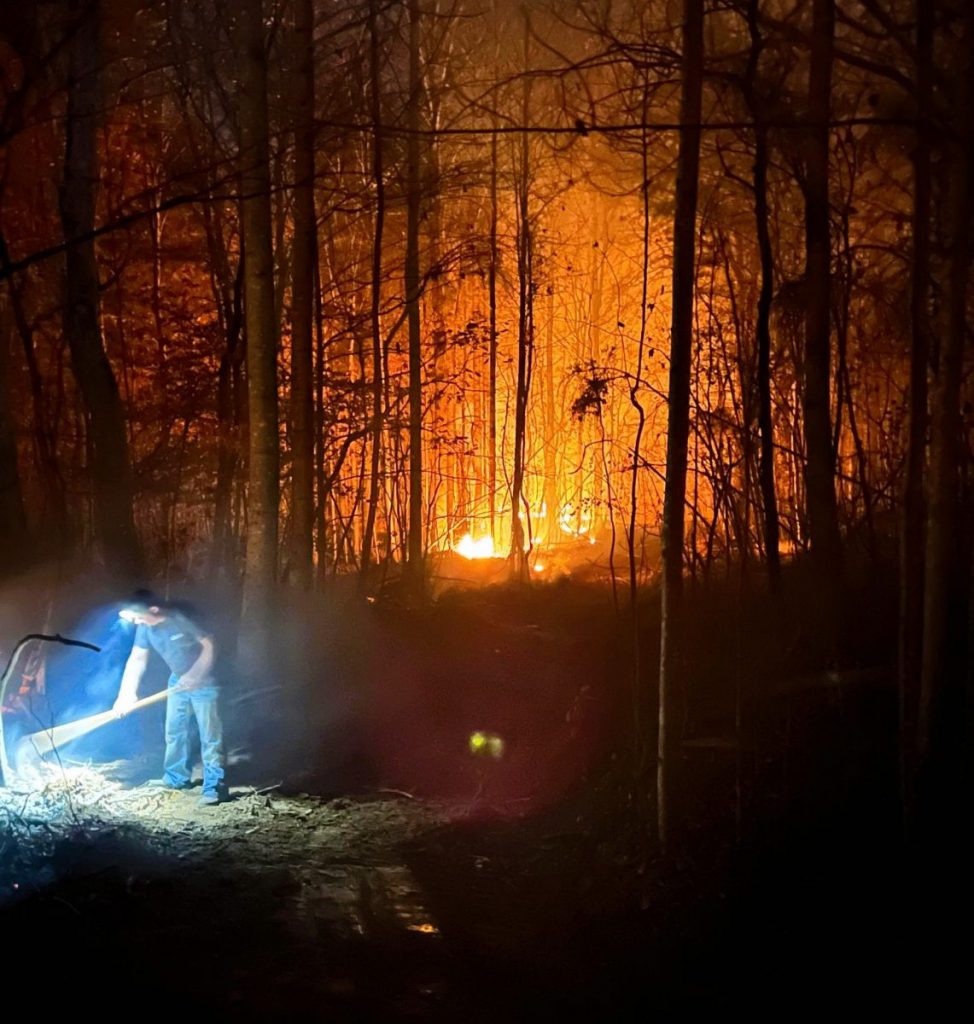 A prescribed burn was held Sunday night and overseen by the Kentucky Division of Forestry, Chief Adam Sloan, and others. The prescribed burn occurred as a way to get rid of leaf clutter and stop rekindling. Photo submitted. 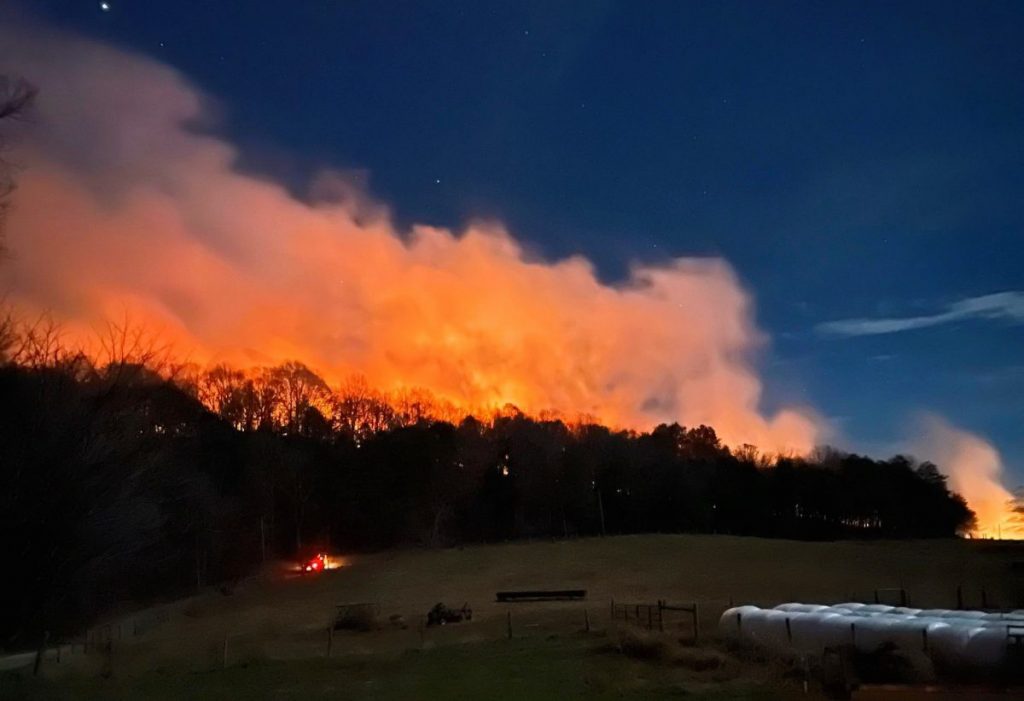 In total, approximately 175 to 200 total acres burned on the nature preserve, which included a prescribed burn supervised by the Kentucky Division of Forestry. Photo submitted.