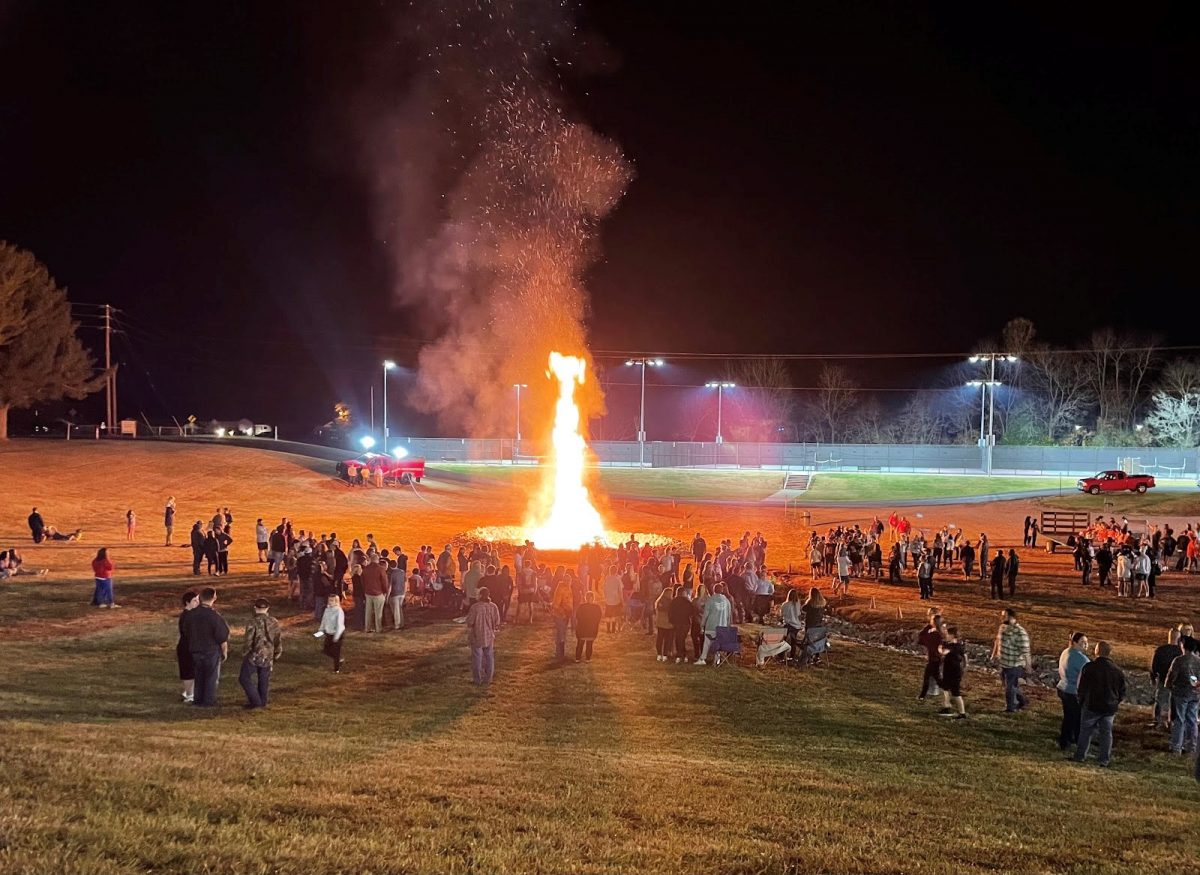 The Hart County Raider Football Playoff Bonfire drew students, staff, families, and alumni to the high school to celebrate the record-breaking season and wish the players luck in the playoff game against Trigg County.  Photo by Katrina England

“In the book of Esther, she was told you were born for a time such as this…and then she went and changed the world,” said Paul Grider, as he spoke to the crowd of students and athletes gathered around the Raider Football Playoff Bonfire on Thursday, November 4. “Raider football team, Raider cheerleaders, Raider band, I say to you (that) maybe you were born for a time such as this, because we are about to go and change the world and do some things nobody in this whole community has ever, ever, ever done before.”

It’s no secret the three groups have been outstanding in their respective areas. The football team went 8-2 in their regular season, which meant they were tied for the most wins in program history. This past Friday, they broke that tie by defeating Trigg County in the first round of playoffs, earning them the school’s first-ever playoff win. They will go on to play Union County on Friday.

The Hart County Varsity cheerleaders are set to defend their title as Region 3 Champions and are seeking once again to bring a trophy home to Hart County, along with plans of repeating last year’s bid to nationals.

The band competed at regionals and also at the Mid-State Band Assocation’s semi-finals in Miamisburg, Ohio this past Saturday. They placed 8th out of 14 bands in semifinals and advanced to finals, where they placed 7th out of 10 bands. Throughout the season, they also earned recognition for Best Percussion.

We’ve had a record-breaking season,” said football junior Clark Rexroat during the bonfire. “We’re hoping to do special things, but that’s not all that’s going on in this community. We’ve got a lot of stuff going on. We’re all doing great things. I’d like to give a shout-out to the band. Bands of America is at Mid-State this Saturday, in Ohio…Without the band, our atmosphere is not what it is, and it’s been great this year, so I just want to say a big thank you to them. Our cheer team is making a run for back-to-back Region Champions on November 12th. Tomorrow night, your Raider football team is hosting Trigg County here on this field (for the) first-ever home playoff game in school history. I want everybody there. We’re going to pack the stands. We’re going to make some noise. We’re going to go crazy! I just want to thank this town from the bottom of our hearts. Y’all have been behind us so much this year, and that’s part of the reason we’ve been what we are. Thank you all so much, and let’s go get them tomorrow.”

It’s safe to say this generation of students and athletes are leaving their mark on Hart County and truly are doing things in our community that no other group has been able to do before them.

Supported and encouraged by their families, school district, administration, community, and of course, their pep section, these groups are showing the world what they’re made of.

As the quote goes, “I don’t want my children to follow in my footsteps. I want them to take the path next to me and go further than I could have ever dreamed possible.”

With their accomplishments still ongoing, the only thing left to say is: Raider Nation, let’s ride!