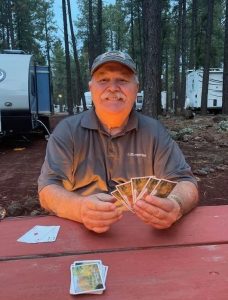 Henry on a camping trip in 2021 with family members enjoying a game of cards. Photo provided by Henry Sullivan

It takes all types of soldiers in war from front-line combat, radio operators, medics, supply sergeants, helicopter pilots, and doctors.

One of those medics was Henry Sullivan, who was born in Metcalfe County, the son of the late Henry Sullivan and Marguerite Reece Sullivan. Henry attended Edmonton Elementary and graduated from Metcalfe County High School. At the age of 20, Henry was working at a Bowling Green hospital in the blood bank in the phlebotomy and hematology departments.

But in October of 1970, he was drafted into the Army. The fighting had been going on since August 1964 and didn’t end until May 1975, so he was drafted in the middle of the war. Henry ended up serving in two campaigns, the 7th counter insurgency and the 1st consolidation, which turned the war over to the Vietnamese. At that time, the troop pull-out had begun so many troops were being sent home.

Henry was sent to Ft. Campbell for his basic training and because he had worked at a hospital he was sent to Ft. Sam Houston for combat medic training. Fate stepped in when a Major from Monticello, Kentucky saw his record and had an opening to fill in the Clinical Laboratory Procedure course, and as Henry put it, “I fit the opening.”

After just 4 months at Ft. Sam Houston, he received transfer orders sending him to Walter Reed Army Medical Center. There he found himself assigned to the Walter Reed Army Institute of Research in the Department of Experimental Surgery.

“I was a Research Corpsman, Lab Specialist, 92B20R,” said Henry explaining that the number wouldn’t mean much to a layperson, but other veterans would understand.

However, after just 3 months, he got orders to go to Vietnam and was sent home for one week to see his family before shipping out.

He landed at Bein Hoa, Vietnam just a few miles from the home base Long Bihn, which was the largest US base in Vietnam. Henry laughed when he said, “I was the youngest at just 21 and the least trained.” 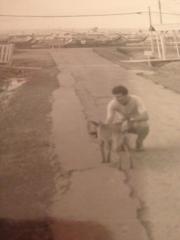 Henry and the camp mascot ‘Combat’. The buildings in the background are the 93rd Evac Hospital where the dust-off helicopters were stationed. Photo provided by Henry Sullivan

Immediately, he was sent to get his Vietnamese driver’s license and assigned as one of two couriers to pick up and deliver samples for drug testing. It was a 24/7 job. The soldiers that were scheduled to go home had to go through drug testing before being sent out.

Any soldiers that tested positive for opiates and morphine derivatives were held and received methadone treatment for 10 days. They had to be drug tested every day until clean before they could be sent on the 18-hour flight home without drugs or methadone. The whole purpose of this was to identify and get them home, not to punish them. The Secretary of Health and several Generals even visited the base occasionally.

Then Henry got his most dangerous assignment as a dust-off medic or flight medic. He would go up in the Helicopter (Huey), pick up the wounded, and bring them back to the hospital for treatment. Only four others from his unit were doing this.

Most of the time the field medic had patched the soldiers up and started IVs, etc. so they had been stabilized. Henry noted that, “the number one reason for a fatality was bleeding to death.”

Around 80% of the missions were going to firefights or near them to pick up the wounded. Sometimes they were escorted by gunships or they called in ‘fast flyers’ to cool the area down so that the gurneys could be lifted up to the helicopter.

“We got hit several times, but never went down,” remarked Henry adding, “That two months felt like two years, but I have yet to feel more useful than at that time.”

There were a lot of helicopter pilots, but not enough crews so you didn’t get sleep for long periods. The Air Evac also took care of accidents on the base.

They all left after 90 days (6/30 – 10/7), so Henry was sent back to Walter Reed Army Institute of Research to the Department of Experimental Surgery where at first he was first scrub for Dr. Ritchie and prepped for his surgical experiments.

The doctor’s research was to find out why the GIs that lost a large amount of blood when wounded would later develop ulcers in the stomach and the beginning of the intestines after their recovery.

Once Dr. Ritchie realized that Henry knew how to suture the wounds closed, the doctor asked him to perform the surgeries on his own. From that point until his discharge, Henry was the primary surgeon performing stomach pouch surgeries on monkeys and dogs. 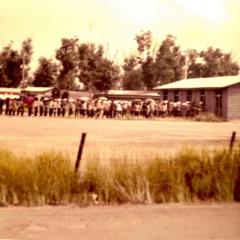 Vietnamese women in line at customs to be searched before being allowed into the Long Bihn base. The women did cooking, did laundry, and cleaned. Photo provided by Henry Sullivan

After a while, Henry got a weekend clinical lab job at Bethesda Suburban Hospital so that he could go to college at night.

He went on to study science (Chemistry and Biology) at U of L. and retired in 2002 from the University of Louisville Medical Center where he was a Medical Research Technologist.

When asked what he thought of the country [Vietnam] Henry said, “Vietnam was beautiful, in the central highlands and the south.”

He also said that when he came home he didn’t tell people he was a Vietnam veteran, because everyone treated them so horribly. However, today most Vietnam veterans are held in high esteem. It’s good to see they are finally getting the welcome and thank you that they so richly deserve. 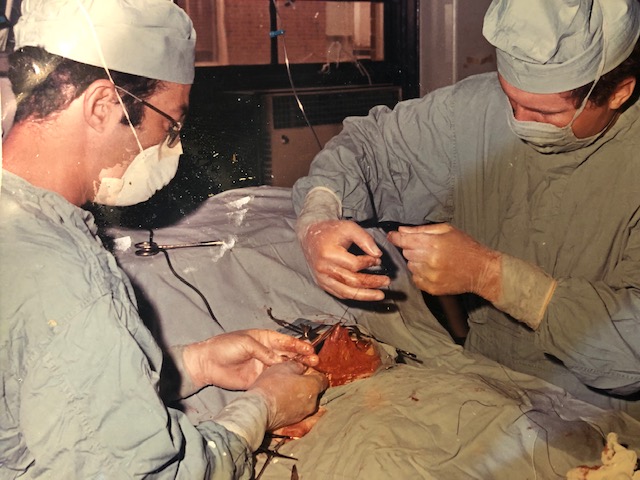 That’s Henry on the right performing pouch surgery on a research animal at Walter Reed in the Department of Experimental Surgery. Photo by U.S. Army Photographer