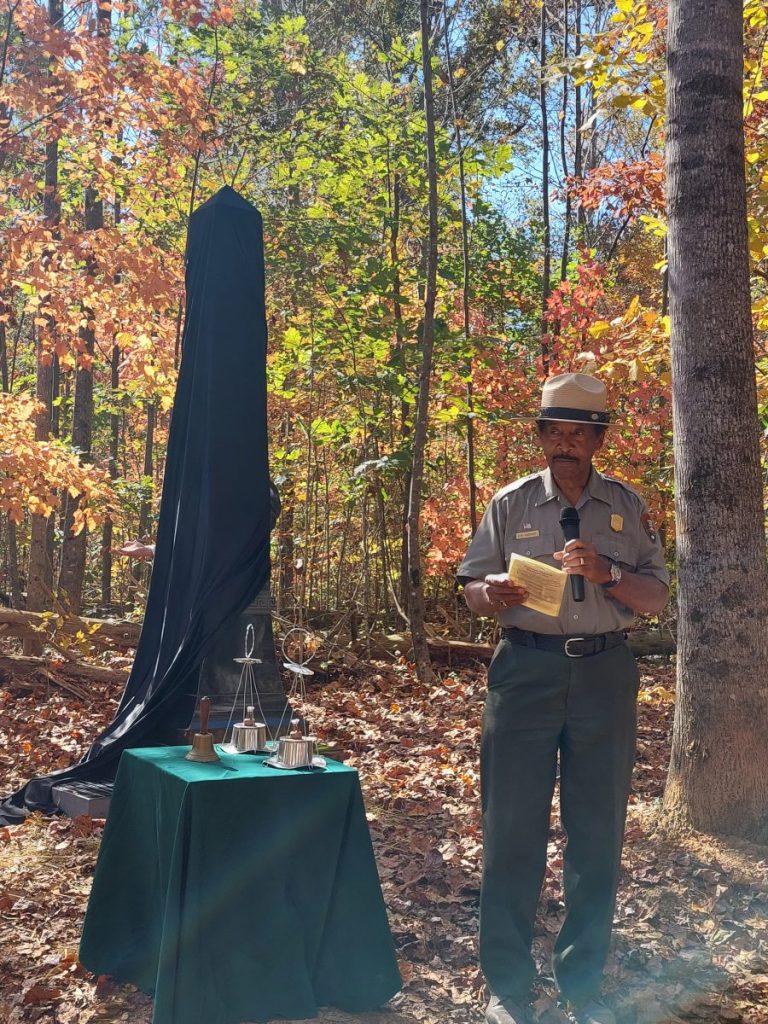 Mammoth Cave has many untold stories. Locals to the area know many of the stories through their family histories. One family with a rich history involving Mammoth Cave is the Bransford family.

Many family members came out to celebrate the dedication, along with Mammoth Cave Park officials. Barclay Trimble, Park Superintendent, welcomed everyone to the event.  The Mayor of Horse Cave, Randal Curry, gave the blessing for the day and the attendees.

Dave Wyrick, Chief of Interpretation, next spoke about how he never really understood ancestral ties to land and the parks until he came to Mammoth Cave. He felt it was remarkable that Jerry Bransford was doing the same work his family had started over 200 years ago.

“When you are doing a craft that your family has been a part of for so long, you develop a deep passion for what you do. It makes it special to you, the people you work with, and the visitors,” Wyrick said.

Wyrick additionally stated that the park service is committed to telling the whole national story from multiple perspectives. These stories are of everyone’s history and are woven together to make the complete story.

The Bransford family was traced back to England in 1789 when they came to Virginia and to Tennessee by 1792. When they arrived in America, they were free but were called servants. By the time they made it to Tennessee, they were slaves.

“I know that we can’t go back and forget anything that has happened, but I hope no one can ever say that I told our story in an angry and resentful way,” said Jerry Bransford said. “I just felt obligated and encouraged to tell America what happened here.”

The Bransford family monument began because a WKU student Joy Lyons was hiking through the woods and came upon an abandoned and forgotten cemetery. Joy was moved to tears when she began to think about those who had been forgotten and what they had endured. Joy Lyons invited Jerry Bransford to come look at the forgotten cemetery.

Jerry wanted to do something for his family, and for years he, along with many others, worked to clean, restore, and reclaim the cemetery. Along the way, Jerry decided that his family’s story was so unique that it needed something more for the future generations to touch and feel the connections to the area. Jerry decided that he would like to see a monument placed in the old cemetery that so many had helped to restore. Many family members volunteered time and so did many of the employees at Mammoth Cave. In fact, there were so many that helped Jerry, he stated he was afraid to start naming names for fear that he would forget someone.

It took almost seven years of work. The family was researched and paperwork was filed and refiled to get permission from the National Park Services. During this time, Jerry worked for a large corporation in Elizabethtown. After 30 years, he decided to begin another career. Jerry became a guide in Mammoth Cave at the age of 57. Jerry wanted to carry on the tradition of a Bransford guide in Mammoth Cave. He has been a guide since 2004.

Jerry was overwhelmed with the amount of support he was given to help erect the monument for his family. The Bransford family has spread out over the entire country from California to Massachusetts, but now they have something to mark their family’s place in history. Just off Flint Ridge Road in Mammoth Cave National Park stands the obelisk in the once-forgotten family cemetery to tell everyone of one family’s story – a story that should not be forgotten again.

Base of the Bransford Monument. Photo by Lynn Bledsoe 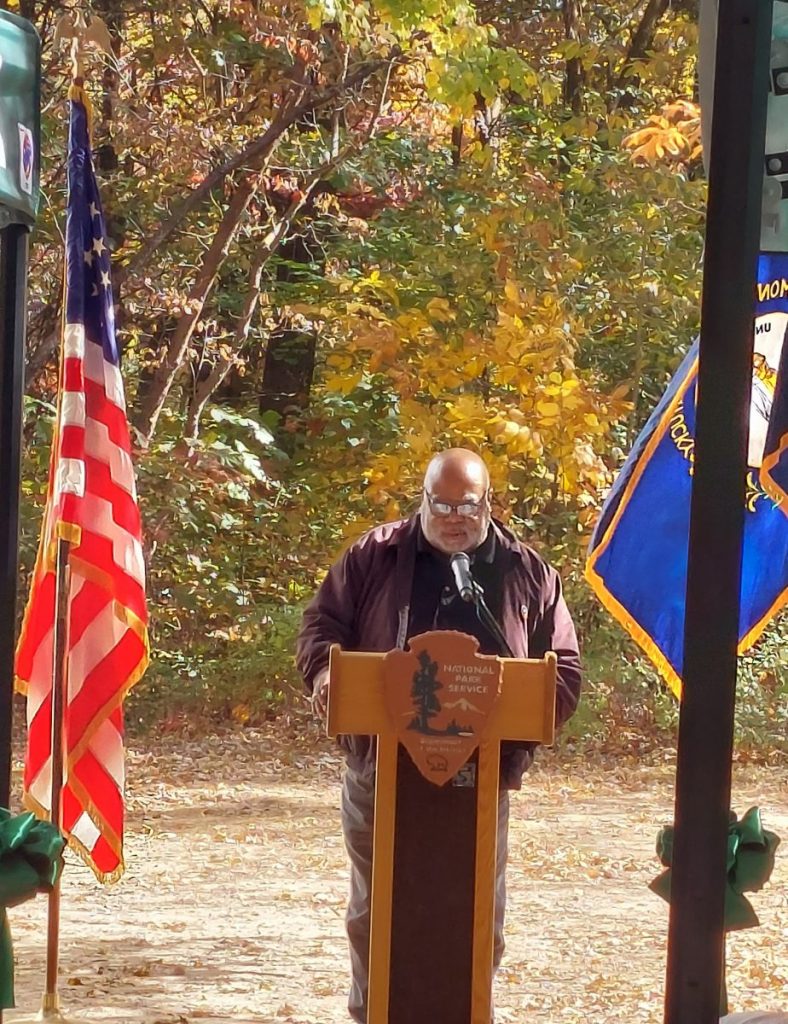 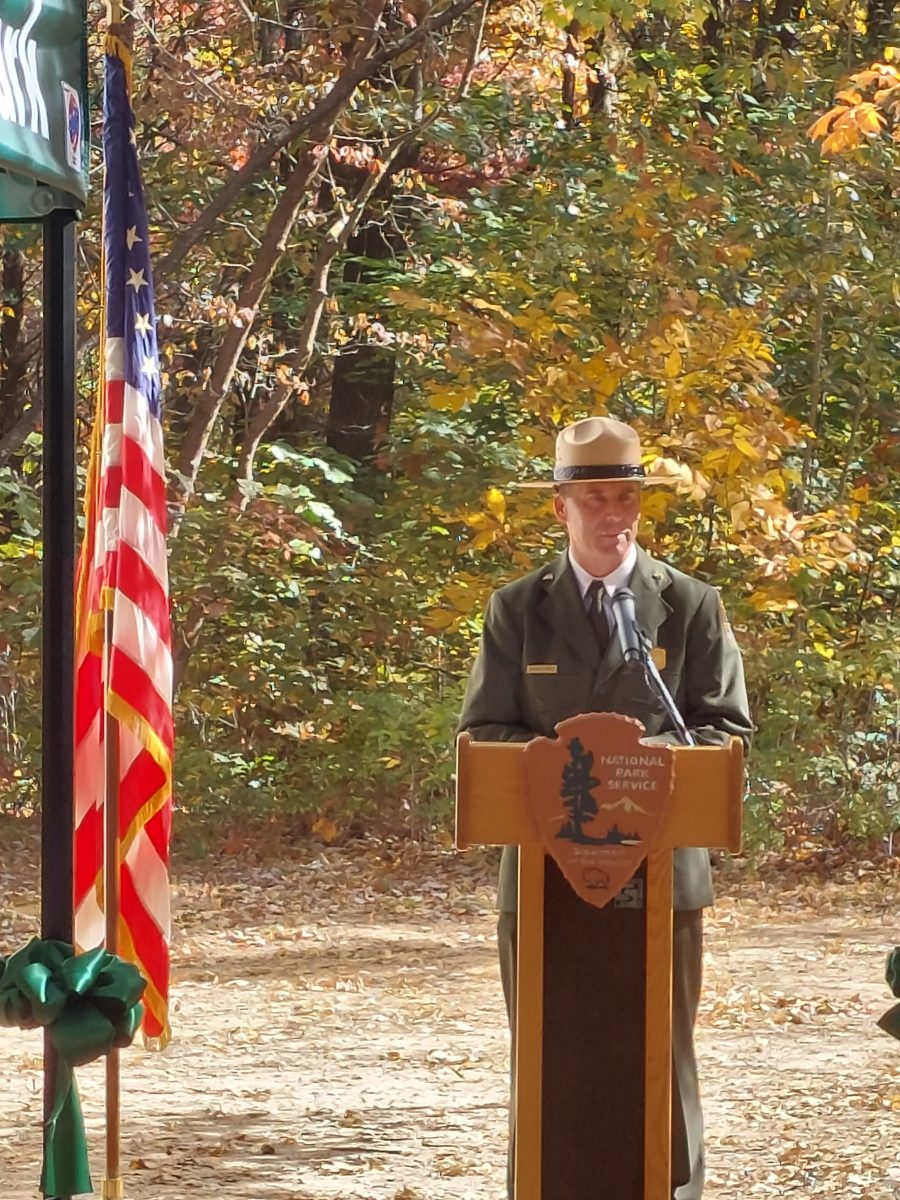