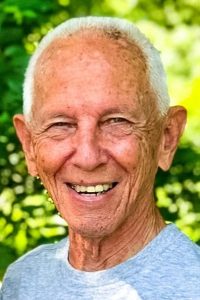 John Edberg, a resident of Green County, Kentucky, died Sunday, October 30, 2022. He was 91 years old. John was born in the aptly named Winter, Wisconsin on January 10, 1931, to his parents George and Eva Edberg. He was the youngest of three, joining his sisters, Marge and Dorothy. He shared a bedroom with his sisters until, as he said, he got too interested in the differences between boys and girls. John attended and graduated from Winter High School, where he played on the basketball team and ran track. He attended one semester of college at the University of Wisconsin – Eau Claire where he majored in having fun. When it became apparent that his school days were coming to an end, he joined the United States Navy at the beginning of the Korean War.

John asked for and received an assignment to a destroyer in Norfolk, VA, but learning that another destroyer was headed to the war zone, he asked for a transfer to the USS Barton (DD 722). He circumnavigated the globe twice on Barton and spent weeks in combat. In Wonsan Harbor, Barton was exchanging fire with a North Korean artillery battery when an enemy shell hit just aft of his General Quarters station and one shipmate was killed. After repairs, Barton returned to combat. John was watching a movie when a tremendous explosion rocked the ship. Five men were killed by the mine. Having two consecutive officers he didn’t like, John left the Navy in 1954. It was a decision he always regretted.

John was planning to become a merchant mariner on the Great Lakes like his uncles, but while waiting for a ship, he applied to and was hired by AT&T in Toledo, Ohio. Shortly after starting work, he met a young telephone operator named Margaret Lusch, and they married less than six months later. Four children followed, David, Michelle, Sally, and Gary. After being promoted to supervisor and transferred to Chicago, a third daughter, Susan, joined the family. The family would move to Dayton and Columbus, Ohio before John retired in 1989. Declaring that he never wanted to see another snowflake, John and Maggie moved to Englewood, Florida where they lived for 25 years. They moved to Kentucky to be closer to family. John was a volunteer firefighter and one of the earliest graduates of the paramedic program. He played softball, enjoyed hunting and fishing, and traveling. He supported the Green Bay Packers, Chicago Cubs, and Ohio State. He was an excellent mechanic and could fix anything from a toaster to an automobile in an era before Google and YouTube videos explained everything. He and Maggie traveled to all 50 US states, mostly in a recreational vehicle or camping trailer. They were also avid cruisers and their last big trip was around South America and Antarctica. He was an outstanding singer and dancer.

John was predeceased by his parents; sisters; son-in-law, Dan Connors; and grandson, Steven Edberg. He is survived by his wife; five children; 21 grandchildren; and 12 great-grandchildren. He was a good man and will be greatly missed.

The funeral service for Mr. Edberg will be held at 11:00 AM CST Saturday, November 5, 2022, at A. F. Crow & Son Funeral Home with military honors provided by DAV Chapter #20. Visitation will be on Saturday morning from 10:00 AM CST until time for the service at the funeral home. A. F. Crow & Son is honored to be entrusted in the care of Mr. Edberg. Please share your condolences with the family at www.crowfuneralhome.com.