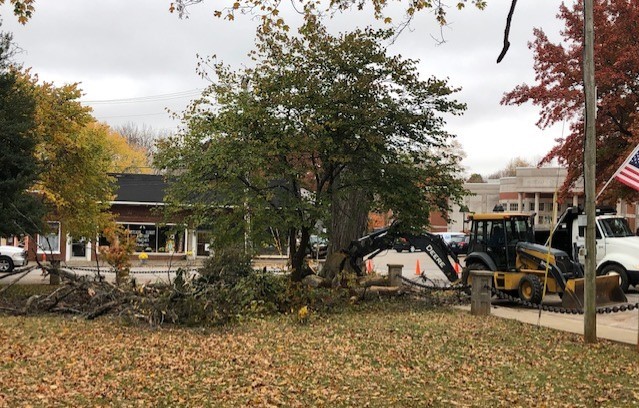 As they promised, Tree KO, LLC workers were on the square Wednesday to remove the huge Elm tree. All but a section of the trunk was removed in pieces and then city workers hauled it away. Photo by PJ Martin

The Metcalfe County Fiscal Court met on Tuesday, October 25th with all members in attendance.

The removal of the large Elm tree in the historic courthouse yard was discussed once again. The tree which is mostly dead has falling branches that have become a danger to anyone passing by. An estimate of $3,350 was received from Tree KO, LLC of Glasgow to take down the tree. Judge Stilts stated that the workers planned to begin on the tree the next day if the bid was approved and that the plan was to take it down in pieces. The removal cost was approved unanimously by the magistrates.

The next order of business was a Resolution concerning the Community Development Block Grant (CDBG) Project costs for the Bowling Park food pantry. In October, the park was awarded the amount of $986,000 in CDBG funds for the new pantry and paving work.

During the discussion, it was noted by County Attorney Barry Gilley that the pantry was, “not county property.”

In response, Judge/Executive Harold Stilts reminded the magistrates that, “we just secured the block grant for them.”

Two appointments were made to the Metcalfe County Extension Board. They were Eddie Jessie and Bobby Druen.

The financial statement and claims were reviewed and approved. The members were provided reports from the Recycling, DES, and Road Departments for review.