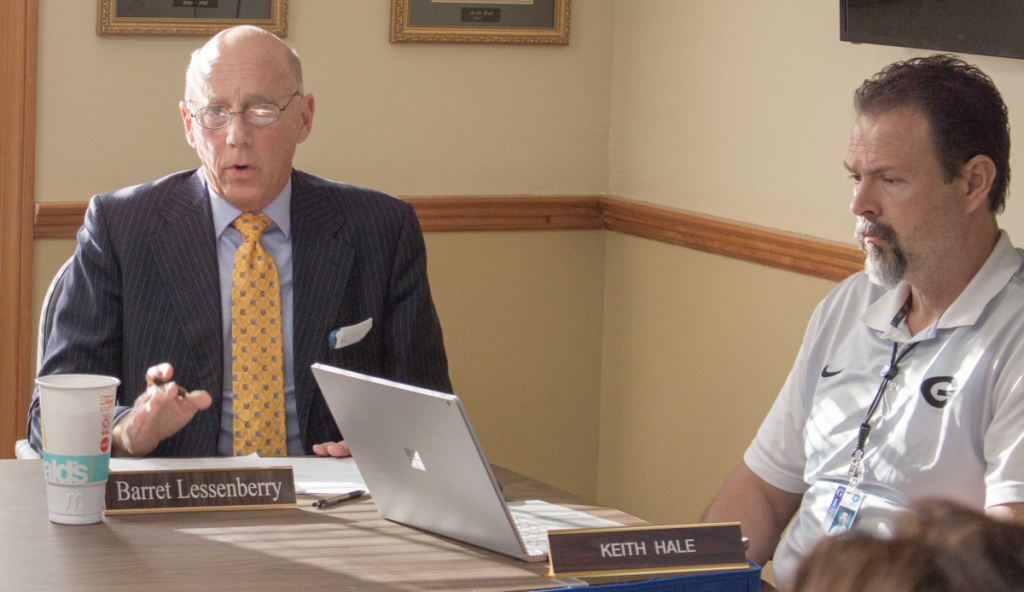 Keith Hale, former superintendent of Glasgow Independent School District, at right, was overpaid nearly $148,000 upon his retirement in June for accrued sick leave. An amended contract between Hale and the board of directors, states Hale would be compensated at the max rate despite state law capping accrued sick leave at 30% of daily salary rate. Also pictured is board member Barrett Lessenberry. File Photo/Allyson Dix

According to e-mail documents that have recently surfaced, former Glasgow Independent Superintendent Keith Hale was overpaid nearly $148,000 upon his retirement in June for accrued sick days.

In an August 16th e-mail from the interim superintendent, Larry Hammond, following Hale’s retirement, he said Hale was overpaid $147,720.35. Hammond is the District Consultant and Superintendent Mentor at GIS.

Hammond’s e-mail is to Kentucky Dept. of Education General Counsel, Todd Allen, and reads: “The short version of the finding is simply the payment of $147.720.35 to Mr. Hale upon his retirement that was above the 30% allowed for accumulated sick days. He was paid the daily rate (100%) for his accumulated days.”

Amendments were made in an April 20, 2020, to the employment contract between Hale and the school board that increased his salary $5,000 per year and included the sick leave compensation.

The contract states, “Effective July 1, 2020…is amended to provide that ‘Upon retirement, the Superintendent shall be compensated for the remainder of his accumulated sick days based upon his daily threshold rate.’”

Hammond asserts in his e-mail that the contract was made in error specifying the 100% rate of compensation for the sick leave. He also said in his e-mail to Allen, “I have witnessed many questionable activities and poor business practices over the years of superintendents,” before sharing the finding regarding Hale’s overpayment and noting he had already consulted with Board Attorney Tom Davis and attorneys Regina Jackson and Wayne Young.

The Barren County Progress has submitted an e-mail inquiry to current GIS Superintendent Chad Muhlenkamp for an update on the situation and whether or not any funds have been recouped from Hale.

Hale was expected to serve as superintendent until 2024. His retirement this past June was abrupt and cited health reasons as to why he was retiring.

He has declined commenting on the matter at this time.