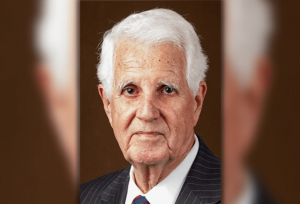 EDMONTON, KENTUCKY – The Honorable Tom Emberton, Sr., retired Chief Judge of the Kentucky Court of Appeals, died October 20th in a house fire. He was born to John Tom and Ersie Poland Emberton in Monroe County where he resided until age 13 when his family relocated to Metcalfe County, his residence for more than 75 years. He is survived by his wife of 65 years, Julia Lee Crutchfield Emberton; daughter Laura Owens (Donnie); son Tom, Jr. (Stephanie); five grandchildren; and four great-grandchildren; as well as a sister, Janelle Downs of Owensboro.

He was a noted leader and statesman, serving his country, state, and community all his adult life. Following a four-year tour of duty in the United States Air Force, Tom enrolled in Western Kentucky University, beginning his more than 65-year involvement with WKU. During his time as a student, he was elected president of his sophomore and junior class, president of his fraternity, and business manager of the College Heights Herald.  Upon completion of his studies at WKU, he attended the University of Louisville School of Law where he continued his willingness to serve in leadership roles, serving as president of Delta Theta Psi Law Fraternity and president of the Student Bar Association.

In 1962, Tom began practicing law in Edmonton, Kentucky where he was elected county attorney in 1964, serving in that role until 1967 when he became part of Governor Louie B Nunn’s administration. In 1971 Tom was the Republican candidate for governor, and in 1987 was appointed to the Kentucky Court of Appeals, going on to be re-elected by the citizens of his district twice. In 2002, his fellow judges elected him to the position of Chief Judge of the Kentucky Court of Appeals, a position he held until his retirement.

Visitation for Mr. Emberton will be held from 2:00 PM until 7:00 PM, Friday, October 28, 2022, at Butler Funeral Home in Edmonton. A private family graveside will be held at a later date.

Butler Funeral home is both honored and privileged to be entrusted to the care of Mr. Emberton. Please share your messages of condolence with the family at www.butlermemorials.com.

Expressions of sympathy may be sent to either of the following:

(In memory of Tom Emberton noted on the memo line)