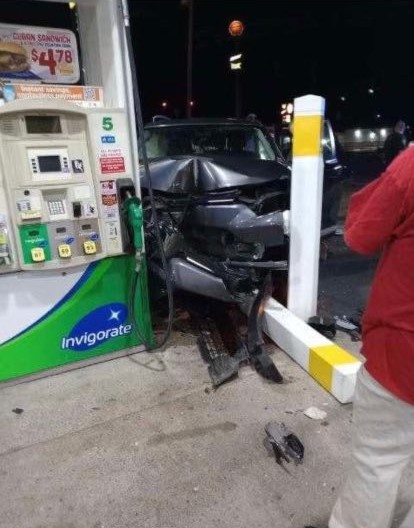 A few weeks ago, three individuals were arrested for DUI after leveling out road signs and swiping the side of a telephone pole before coming to a rest at a Five Star gas pump in Cave City. Photo submitted.

On November 8, residents in Munfordville will go to the polls to vote on whether or not they want alcohol to be sold within the city limits. This is Part Two of a three-part series. This particular part shares the point of view of someone who is against alcohol sales.

When current District 1 Magistrate Gary Gardner sat down to discuss the upcoming vote for Munfordville, he said he wanted to make one thing perfectly clear.

“The ballot question is: Are you in favor of the sale of alcoholic beverages in the city of Munfordville? And a lot of people are unclear of what that means,” Gardner said. “It means that we will be full-blown alcohol sales in our city, not just restaurants…When we go to this alcohol question that we’re going to have to vote on, it means bars, unlimited bars…”

Gardner stated that for anyone who thinks that the sale of alcohol in Munfordville will generate a large sum of money for the county, think again.

“I talked to the cities of Glasgow, Cave City, Horse Cave, Edmonton, and Greensburg. I talked to the clerks of every one of them and asked them about the tax money that we are being told is just gonna become a goldmine in Munfordville if we pass this stuff,” Gardner said. “They said it could not be put in general fund. It cannot be used for road improvement. It cannot be used to increase the salary of our clerks or to buy equipment for our water company.”

According to Gardner, taxes that are derived from alcohol sales can only be applied towards three things: (1) law enforcement; (2) the Alcoholic Beverage Control Commissioner, which will be a local person who ensures that the alcohol is regulated in the correct way; and (3) education.

“We’ve got a population of 1,659 people (in Munfordville),” Gardner said. “Greensburg has a population of 2,200 and Edmonton has a population of 1,936…Greensburg last year took in $38,000 of alcohol tax which did not go into a general fund, so what’s $38,000 when you’re talking about more violence, more drunk driving, chaos in the family, families busted up…So when they (the supporters of alcohol) told you that we’re going to get all this revenue, that’s one false statement that has been made.”
Another false statement that has been made, according to Gardner, is that the sale of alcohol in Munfordville will bring in restaurants like Texas Roadhouse.

“Greensburg (which is wet) has not put a new restaurant in town, but Greensburg has two bars,” Gardner explained. “…Cave City doesn’t have any new restaurants, no Texas Roadhouse, no Olive Garden, no Red Lobster. They’ve got a couple of local restaurants, Mexican restaurants, and some of those people come to Munfordville to eat at El Mazatlan because they think ours is better, and guess what? There’s no alcohol at El Mazatlan in Munfordville…Cave City has three bars and is working on a fourth one.”

Another argument that has been made to Gardner is that there will be no increase in drunk driving or domestic violence if alcohol sales are made available.

“That goes against what I researched from the National Library of Medicine, and the National Institute on Alcohol Abuse said that the more frequent places you have to go in and get liquor is a direct relation to more assaults, more violence, more chaos in families, more destruction in families, and related to drunk driving,” Gardner said. “They (the research) also said that if alcohol is readily available, families are going to be tempted to spend their money on alcohol instead of food and necessities for their family of which they may not be able to afford it.”

Gardner also mentioned that approximately four weeks ago, three patrons came out of the bars at Cave City. Those same patrons entered their vehicle and then slammed into the gas pump area at Five Star.

“Luckily they didn’t hit the gas pump head-on…and it didn’t blow anybody up, but they got arrested and their car was destroyed,” Gardner said.

Gardner also referenced an incident that occurred on October 19 in which an intoxicated man was standing in the middle of the road in downtown Cave City. Police responded and the man was apprehended and taken to the Medical Center at Caverna. While at the hospital, he became combative with officers was eventually transported to Barren County Detention Center where he became combative with officers again. The man was charged with disorderly conduct, alcohol intoxication in a public place, resisting arrest, terroristic threatening, and assault of a police officer.

“Last year in the United States of America, Americans bought $135 billion worth of liquor. It’s big business,” Gardner said. “If you don’t think it’s big business, watch a sporting event. They make it look great. It’s appetizing to our eyes, and do you think that the liquor industry is not going to come to Munfordville if we go wet? Because money is what it’s about with the liquor industry. They could care less about mine and your welfare.”

Gardner stated that the upcoming vote is about keeping Munfordville what it should be: a family-friendly place to live and visit.

“We got rid of one evil in Hart County about three weeks ago, the Adult Book Store. Why would we want to bring another evil to Hart County?” Gardner said. “I guess the question that Munfordvillians need to ask is: do we want to be like Cave City (with) bars, saloons, honky tonks, and what else to follow?… I hope the people of Munfordville will vote no on November 8 to keep alcohol out of our City.”

Next week in the November 3 edition, the Hart County News-Herald will publish Part Three of this series regarding the sale of alcohol in Munfordville being placed on the ballot. 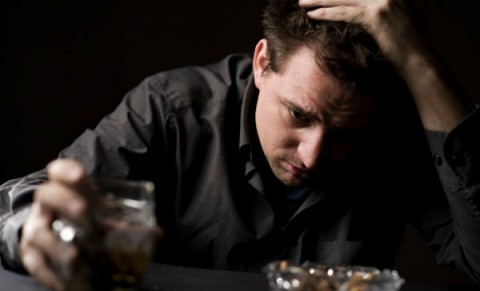 On November 8, residents in Munfordville will go to the polls to vote whether or not they want the sale of alcohol to be allowed within the city limits.