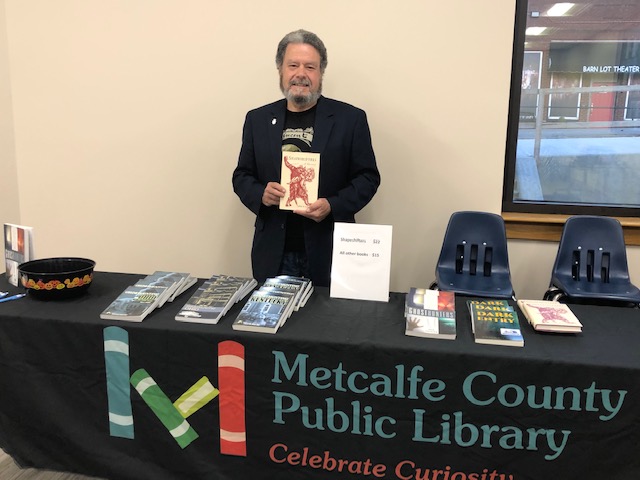 Award-winning writer and certified ghost hunter John B. Kachuba presented a program entitled “A Ghostly World” at the Metcalfe County Public Library on October 13th to an audience of all ages.

First, he discussed exactly what a ghost is stating, “We have this image of a floating sheet coming down the stairs, rattling chains, and making all kinds of weird noises.”

He wanted everyone to think about ghosts in other ways such as, “A ghost might be an entity that we create in our own mind.”

An example of this would be grieving a family member which has passed and missing them so much that you envision them for a moment in the home possibly sitting in their favorite chair.

The second is more involved with quantum physics and relates to parallel universes.

The third is the standard explanation that a ghost is the remains of a soul, spirit, energy, etc.

Many of those in attendance shared their personal paranormal encounters and hard-to-explain events with him as well. That made the evening even more interesting for the audience. He also entertained questions from those in attendance.

In Mr. Kachuba’s presentation, he related events which occurred during several investigations he had taken part in throughout Kentucky and Ohio along with photographs taken at those locations while describing his personal experiences at them. Some of what he had experienced was chilling, to say the least.

He has been a part of more than 100 investigations all over the United States and internationally. Perhaps the most distressing was his encounter with the dark shadow in the basement of an old school building that Nuns had run. Unannounced to him, he may have walked directly into the dark entity taking on the depressive emotions of the dark figure.

He related stories of encounters at the Waverly Hills Sanatorium and the death tunnel located in Louisville, the old hospital in Scottsville, and even the Hall Place Bed and Breakfast in Glasgow.

He explained that many times he would receive a call about a location and be asked if he would investigate it. He also presented copies of photos taken by others showing very eerie images and related the stories as told to him by those involved.

As an author, Mr. Kachuba has written 5 non-fiction books about the paranormal and his investigations He has written 12 books in all, plus he has edited books for fellow authors. He holds a Creative Writing Degree and has taught the subject at the University of Ohio and Gotham Writers Workshop.

His book Dark Entry was awarded the Sunny Award for Best Seller in 2018. He was also a finalist in the 2020 Horror Writers Association Bram Stoker Award for Superior Achievement in Nonfiction.

Mr. John Kachuba’s presentation was funded in part by the Kentucky Humanities and the National Endowment for the Humanities.

A few of the books written or edited by John B. Kachuba. Photo by PJ Martin