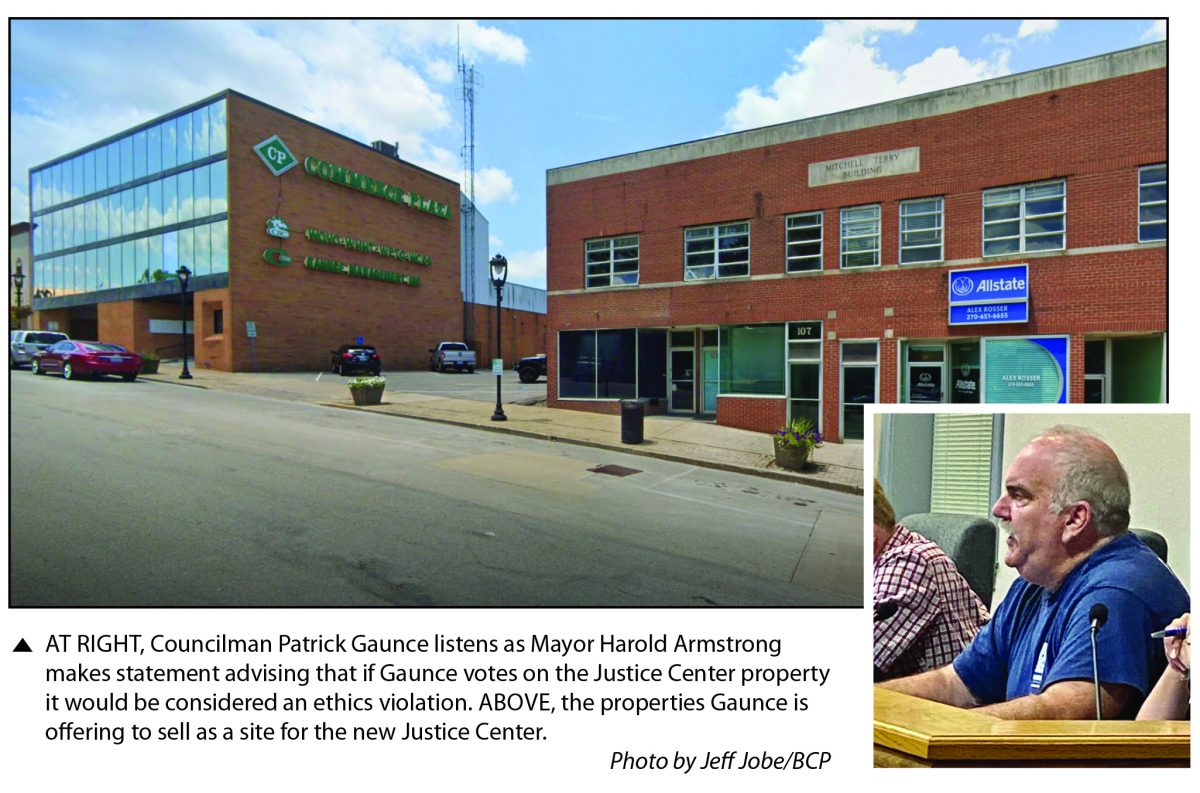 Mayor advises not to vote to prevent an ethics violation

It would be no surprise to most anyone that offering personal properties for sale to a government project land search might be a conflict of interest for an elected official who is also voting for the outcome of said project. That is, anyone except for Councilman Patrick Gaunce.

Definition: A conflict of interest involves a conflict between the public duty and the private interest of a public official in which the official’s private-capacity interest could improperly influence the performance of their official duties and responsibilities. Because of this, a common theory recognized by the Kentucky Attorney General’s office is to remove yourself from a vote in which an argument could be made for an appearance of a conflict.

What has many confused is why would Gaunce vote on any Justice Center location when both the public and the county’s top legal professionals are intimately aware that Gaunce has offered property for a possible location.

The Barren County Fiscal Court created the Property Development Board (PDB) for the purpose to explore possible locations for a legislative approved $32M project.

The PDB includes: John T. Alexander, Barren Circuit judge; Gabriel Pendelton, Barren District judge; Rich Alexander, a representative of the Barren Bar Association; Joan Norris, a Cabinet for Health and Family Services representative; Krissie Fields, Barren Circuit clerk; and Micheal Hale, Barren County Judge/Executive. Each of these members are in a position to know that Gaunce has offered his property for the project, and several have spoken with both the Barren County Progress (BCP) and the county magistrates of the possible locations.

It was first reported in the BCP during the week of September 29, 2021 that four locations had been considered at that time. Hale described the four locations to be the  Newberry/Gaunce buildings, the Baptist Church parking lot property, the US Bank property, and the Glasgow city-owned property on West Main.

Since that date, the BCP has referenced this information and even had maps printed showing the properties. The BCP has also spoken with various members of the PDB about the locations and why or why not those might be chosen.

The BCP confirmed a second West Public Square property purchase on August 30, 2021 with Gaunce, and he acknowledge on December  9, 2021 as the property being added as a possible location.

In the December communication, it was discussed that perhaps the Council wouldn’t sell it and his properties would still be a possible location. Gaunce wrote, “…Waiting on them to free up – and part of reason of delay was being in final for courthouse. As you, I think that would be a great place for it. Obviously that’s some self serving.”

The properties identified as the Newberry/Gaunce locations are located on the West side of the public square. The Property Valuation Administration (PVA) shows two properties that are associated with Gaunce. The first is located at 113 West Public Square and the other at 101 West Public Square.

The 113 location is in the name of a Limited Liability Corporation (LLC) called 113 Wear Public Square, also identified as the Commerce Plaza LLC. The Kentucky Secretary of States shows it was originally established in 1998 by James H. Newberry, Wayne Gaunce, and Steven W. Newberry. Although there is no indication of Councilman Patrick Gaunce himself having ownership of this location, the city ethics code would prohibit him from voting on issues relating to his father’s property or property associated with his father’s estate.

On July 19 of 2021, Councilman Gaunce himself purchased 101 West Public Square.   He bought the property for $213,500 from the LLC, Glasgow Investments, owned by Larry Jewell. This purchase was done after the public announcement was made regarding the judicial center project and also after the first PDB meeting in October of 2020.

Gaunce purchased this second property to package with the original property offering most of the west side of the public square to be used as a location. He was speculating on the property for the new location.

This is what Gaunce communicated to Glasgow City Codes Officer Cheryl Peña, and she shared the information with the Glasgow Historical Preservation Commission and the Glasgow Codes Enforcement Board. Peña did so not as any means to be disrespectful to Gaunce, but rather to inquire why other property owners with violations were being fined while Gaunce was not.

Councilman Gaunce purchased the 101 West Public Square building with several violations, and City Attorney Danny Basil confirmed he was made aware of the violation and that those violations would pass on to him.

Councilman Gaunce has allowed the historical building to fall more in disrepair all with the understanding that he was waiting for his property to officially be ruled out of the Justice Center property search.

Knowing these facts, along with all those named above, Mayor Harold Armstrong read a statement notifying Gaunce of the conflict in open meeting on August 22, 2022  just prior to the vote to sell land to the county for the Justice Center. Gaunce’s vote broke the tie for the nine members keeping his property in play.

Sources close to the city say reading the statement was advised by the Kentucky League of Cities (KLC). The KLC is a voluntary league offering support for “community innovation, effective leadership, and quality governance.”

Even after the statement was read publicly advising him of the conflict, Gaunce chose to vote. And because of this, Gaunce’s single vote kept the search open and his location still in play.

Gaunce has made public statements that an ethics complaint has been filed, even encouraging the public to attend the original date set. The irony is that the meetings are not public, and for a sitting elected official to do this is in itself a violation. That meeting was canceled and another scheduled without public notice.

The BCP cannot receive any comments on the record because the ordinance in place requires it to be kept private and specifically states no discussions made.

In summary, Gaunce offered properties as possible location for the Justice Center, spoke openly about it, and the public was informed. The PDB, magistrates, city council, Historical Commission, Codes Officer, and the Codes Enforcement Board were aware of it as well. Gaunce was openly advised not to vote because of the possible conflict, but he ignored this, stating, “All property owners in downtown Glasgow thought they were considered.”

The BCP now waits to see if Glasgow will allow Councilman Patrick Gaunce to ignore ethics for himself and disregard the work of so many individuals who volunteer to make Glasgow a better home. The issue is in the hands of the Glasgow Codes Violation Board.

A hearing date is not expected prior to the upcoming election.