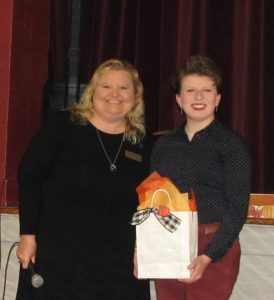 Cheyenne Walden, niece of Sandy Curry accepted the business of the quarter award for Gene’s Freeze and Skating Rink from Chamber President Torrie Osbon. Photo courtesy of Chamber of Commerce

The Edmonton-Metcalfe Chamber of Commerce held its fall quarterly breakfast on October 11th at the old school gym with a big crowd in attendance. The breakfast was catered by Diane’s Cakes and Catering and delicious as always. The sponsor of the fall breakfast was Barn Lot Theater.

The Business of the quarter was awarded to Gene’s Freeze and Skating Rink by Chamber President Torrie Osbon. Cheyenne Wyatt Walden accepted the award. Gene’s Freeze has been a fixture in Edmonton since 1958. The ‘Freeze’ is still the only place you can get a handmade banana split or pineapple milkshake plus go skating.

Barn Lot Theater Executive Director Kyle Hadley spoke briefly about the economic impact the theater has on the community. “For every person that comes to see a show at Barn Lot, on average, they’re going to contribute $30 to the local economy, they’re getting gas, their shopping, whatever.”

Barn Lot also hosts bingo each week and has the Auction Barn with online auctions. Those also bring hundreds of people to Edmonton each week contributing even more to the economy. 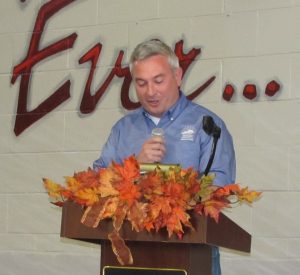 Commissioner of Agriculture Ryan Quarles spoke about farming and bringing quality and affordable broadband Internet to the rural areas of Kentucky. Photo courtesy of Chamber of Commerce

The Kentucky Commissioner of Agriculture Ryan Quarles was the first guest speaker. “In most of our rural counties agriculture is the number one employer. Here in Kentucky, it’s the second largest industry only behind manufacturing. We’re responsible for 200,000 jobs across the state.”

Quarles spoke about his family and his father still working on the farm. He spoke of the values he learned growing up on the farm and that ‘don’t quit until it’s done attitude’.

He presented some agriculture statistics for Metcalfe County with its, “948 farms, your farming 138,000 acres, but perhaps the most stunning statistic of them all is how much revenue is generated right here in your home county when it comes to tillage of soil and husbandry of animals over 42 million dollars.”

Quarles also spoke of how essential it is to be producing our own food and noted that in the past two years that the state has reinvested 7 million into meat processors within Kentucky. 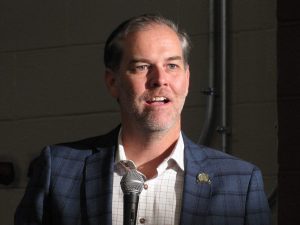 Senator Max Wise explained the need for the two amendments on the November ballot. Photo courtesy of Chamber of Commerce

The next guest speaker was Senator Max Wise who spoke about the two amendments that will be on the November 8th ballot. He is encouraging everyone to vote yes on both constitutional amendments and explained their importance.

The first amendment gives the ability to the Kentucky General Assembly the legislative branch to be able to bring themselves into session for up to 12 days without the Governor calling a special session.

“This is critical!” stated Wise explaining that during Covid shutdowns they (legislature) couldn’t go in session, meanwhile, the Governor was writing executive orders without consulting with the legislature.

Voting yes, will allow the legislature to vote itself into an emergency session when needed and remove that power from the Governor.

The second amendment deals with pro-life legislation. “It’s simply saying, us the voters of this Commonwealth, that we will be a pro-life state, and that we will not fund an abortion, there will not be a right to abortion, but that the legislature can develop policy as relates to this.” 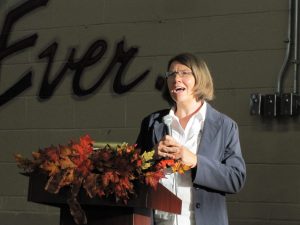 Wise stated that many states bordering Kentucky have already passed this type of legislation and asked that people please vote yes to show that Kentucky is a pro-life state.

The last speaker of the morning was Tara Hall director of the 400 miles yard sale. She relayed her passion for the job of director and that she wanted, “to help folks not only find great deals at yard sales, barn sales, sidewalk sales, but to help them discover Highway 68 communities.”

She related that Edmonton has a unique place on the map of the 400-mile sale, because of the small-town businesses that survive here and the great potential of the community.

Lastly, the committee working on the stage plans for the historic courthouse yard prepared photo renderings of the planned stage and set up a presentation. Those photos were available for anyone in attendance to look at and comment on.

In closing, some wonderful door prizes donated by Barn Lot Theater were given.