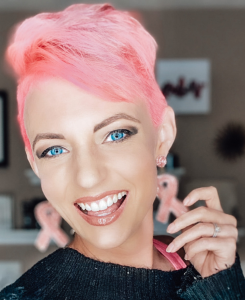 Courtney Line was diagnosed with breast cancer at the age of 31. She credits her faith for helping her to persevere during one of the most difficult times of her life. Photo submitted.

In August of 2021, Courtney Line had contracted COVID. The illness in itself had brought with it lingering symptoms, including anxiety and panic attacks.

But Courtney, who had never been an anxious person, had concerns and felt as though something just wasn’t right.

“Crazy enough while going through COVID, the Lord spoke to me vividly in the shower one night saying, ‘This is a blessing.’ Thinking He meant time to slow down and be with family was a blessing, I soon realized it was much more than that,” Courtney said. “The lingering COVID symptoms led me to feeling around on my body and feeling a lump in my left breast that didn’t match the other side. I knew I needed to get it checked out.”

After a mammogram and ultrasounds, three tumors were discovered in Courtney’s left breast. Three biopsies were taken, and on November 30 of 2021, Courtney was diagnosed with invasive ductal carcinoma.

The 31-year-old had breast cancer.

“It came as a shock to my entire family and me,” Courtney said of her diagnosis. “Breast cancer doesn’t run in our family, and I am negative for the genes. I knew there was something going on with my health, but I never imagined it to be cancer.”

Courtney’s battle against the disease began with surgery. Although her right breast was completely clear, she decided to undergo a double mastectomy.

“I wanted to do what I could to hopefully never have to experience this again,” Courtney said.

During the surgery, Courtney’s attached lymph nodes were also removed. When Courtney walked out of surgery, she was declared in remission. However, it was found that one of the lymph nodes that had been removed was positive for cancer. Because of that, Courtney’s original course of treatment, which was initially just surgery and radiation, changed to eight rounds of chemotherapy over the course of 16 weeks and 25 rounds of radiation.

“…After learning about my treatment moving forward, I was scared to death,” Courtney said. “However, I knew it was important to follow my doctor’s plan in order to kill any remaining cancer cells and prevent this from happening again.”

The months of treatment, especially chemo, were difficult for Courtney and her family. But through a strong faith, Courtney continued onward. As the saying goes: nevertheless, she persisted.

“There were multiple days where I really didn’t know how I would put one foot in front of the other, and it was the strength of the Lord that pulled me through my weakest moments,” Courtney said. “I struggled my first four rounds of treatment with nausea and extreme fatigue. I dealt with mouth sores and change of taste, which was hard to get through as well.  I lost quite a bit of weight during this time due to a lack of appetite. My last four rounds of treatment were better, no nausea but still very tired.”

During this time, Courtney did her best to continue a normal routine as a wife, mother, and teacher.

“My husband did so much during that time,” Courtney said. “He allowed me time to rest and took over pretty much everything with the house.”

“With a social media presence through makeup and skincare, I had people all over the world reaching out to support,” Courtney said. “This was such a blessing, and being able to continue sharing beauty and skincare tips was like therapy for me. It was another way to kind of forget what I was battling.”

A native of Louisville, Courtney currently resides in Munfordville with her husband, Justin, and their two children. Through this journey, she has learned what it truly means to live in a small town.

“Thank you so much to the community of Hart County who provided so much support to me during this time…always checking in, providing meals, sending sweet gifts and encouraging words,” Courtney said. “…As someone who grew up in Louisville and just recently made Hart County my home, everyone here supported me as if I have been here all my life. That’s when you know your community is special. I am blessed to live here, and I am so thankful to everyone who prayed for me, helped my family, or helped us during one of the hardest seasons of our life.”

While she is quick to thank her family, friends, and community, above all else Courtney gives full credit to God for her strength and perseverance.

“It was all Jesus,” Courtney said. “Psalm 23 remained a constant for me.  He used my husband, my family, my friends, and this community to be His hands and His feet to walk me through the valley.”

Although Courtney is currently in remission and deemed cancer free,  she will continue taking an oral chemotherapy pill for the next two years and a hormone-blocking medication for the next five years as her cancer was hormone driven.

“Cancer doesn’t discriminate,” Courtney said. “I felt like I was a fairly healthy, young woman with no family history. It is so important to do your self-breast exams. It isn’t something I ever did consistently, and I am so thankful I chose to feel around when I did. I wasn’t scheduled for a routine mammogram until the age of 40. I can’t imagine where I would be if I wouldn’t have felt my tumors.”

“The scary statistic is that 1 in 8 (women) will be affected by breast cancer,” Courtney continued. “Research ways to prevent it. Do your self-checks, don’t skip routine mammograms or imaging, think about what you’re eating and how it affects your body. What are you using in your home? Are you exercising in some way every day? All of these lifestyle choices are something we can control, and they all help prevent cancer.”

To those who are currently battling the disease, the young breast cancer survivor offered a few words of advice.

“Don’t quit. Keep going. Focus on enjoying each and every day. Focus on what you are fighting for – your family, friends, and those that love you,” Courtney said. “Take things one day at a time. As you know, every day is different. Research, make lifestyle changes if necessary, and take control of what you can control. Start a gratitude journal and keep a positive mindset by telling yourself how strong you are. You are a warrior.” 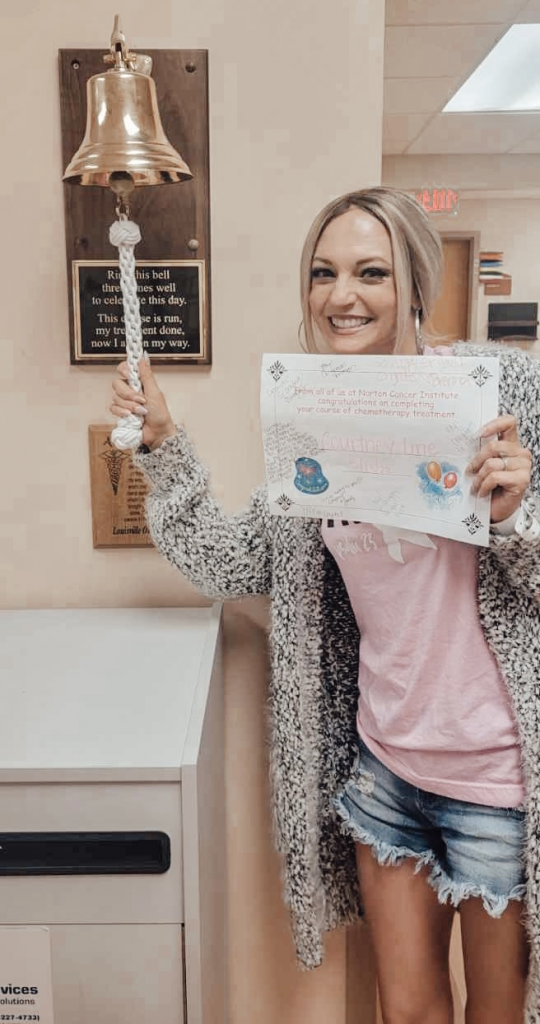 Ringing the bell was a bittersweet moment for Courtney Line after completing her course of chemotherapy treatment. Photo submitted.

Family is an important part of Courtney Line’s life. With Courtney is her mother, Terry Lewis, and her husband, Justin Line, on the day she completed her last radiation treatment. Photo submitted. 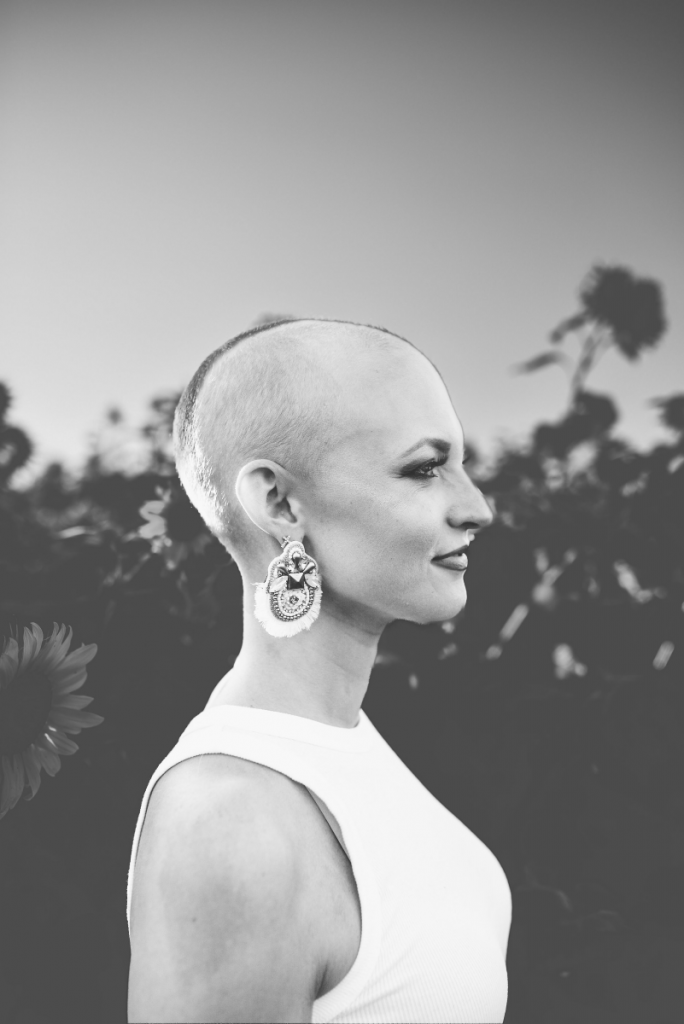