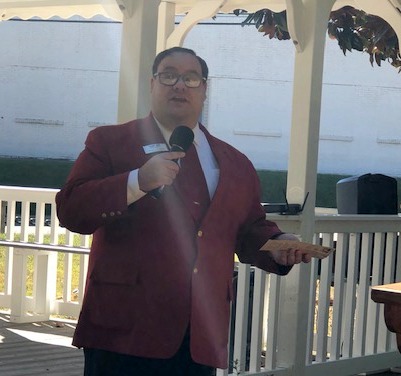 Barn Lot Theater kicked off National Arts and Humanities month by holding an announcement in the historic courthouse yard gazebo on October 4th.

Cindy Cassady a member of the Board of Directors welcomed those in attendance followed by Executive Director Kyle Hadley presented statistics about National Arts and Humanities Months provided by the U.S. Bureau of Economic Analysis.

“Here in Kentucky, 2.5 percent of our gross domestic product is arts jobs. That’s a little over 52,000 jobs and nearly 5 billion dollar industry in Kentucky. Isn’t that an incredible number? So if we dial it back and think on the local level, statistically speaking, about 30 dollars for everybody that comes to see a show is spent in-county whether it’s getting fuel, eating, all of these expenses outside.”

“We support local. We try to buy local buildings, supplies, we patronize local businesses as much as possible, and the stats a few years ago, $1 spent in-county becomes $3 in the economy…Barn Lot is proud to support Metcalfe County and we’re proud of what we’ve b come over the last 43 years.”

Office Manager Teresa Kitchens announced a new ticketing system, “We have added another category, if you will, for the season tickets. For your first responders, law enforcement, EMT, firefighters, nurses, police officers, military whether you’re a veteran or presently serving, your season tickets for this year will be $48…single tickets will be $10.”

Kitchens also discussed the handicap adjustments that had been made to the theater seating.

Hadley, in the absence of Herb Sparks, went over some of the 43-year history of Barn Lot Theater. From humble beginnings in Bowling Park to the thriving theater it has become.

Two of the actors in the current play Young Frankenstein, Ryan Ward and Joseph McDowell, performed a wonderful rendition of Together Again for the First Time for those in attendance.

The 2023 season plays were each announced by one of the following Larry Wilson, Josh Hurt, Joseph McDowell, Amy Neighbors, Benny Lile, and Holly Coleman.

A Funny Thing Happened on the Way to the Forum, rated PG, Comedy

A Proclamation was signed by Mayor Doug Smith and Judge/Executive Harold Stilts proclaiming October in the City of Edmonton and Metcalfe County as National Arts and Humanities Month.

A drawing for door prizes was held after the season announcement. 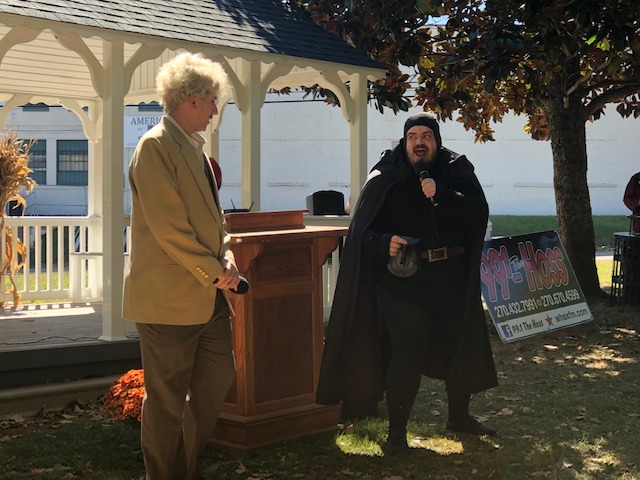 Young Frankenstein cast members Ryan Ward and Joseph McDowell gave those gathered a spectacular rendition of Together Again for the First Time, a song from the play. Photo by PJ Martin