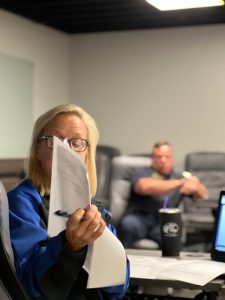 Will the partnership dissolve?

At the regularly scheduled September 27th meeting of the Governing Board of Barren-Metcalfe 911, several members were absent, but there was a quorum. Although the agenda was brief, the meeting was lengthy and tension ran high as lingering questions about the continuing strife between Barren and Metcalfe took center stage.

Mayor Larry Poteet made the motion that when the committee reconvenes in November Metcalfe County present a plan of action.

“Metcalfe County needs to have us an answer of some sort at the scheduled meeting,” said Poteet.

Board member Wendell Honeycutt said, “I don’t see that we have to have a deadline as long as they’re paying what they are supposed to be paying us. I don’t see the need to rush them.”

“We have no idea if they’re going to pay, and,” said Poteet. “We can’t sit here and beat this horse for another year.”

Linda Wells chimed in to clarify saying that regardless of what Metcalfe decides they would simply like to know by the November meeting.

“We want to know if it’s their intention to pay, or to split or to combine,” said Wells.

Curt Estes, representative for the City of Edmonton, said, “What is going to happen if we don’t have an answer?”

“That is brave, I’m not going to be the one to tell some person in Metcalfe County that their kid died on the four-wheeler crash, because they couldn’t get anybody there,” Estes said.

“When I say that, what I mean is we split the agreement. Not that you’d be without 911 services, but it wouldn’t be with us,” Armstrong replied.

Although the vote was split, those in favor of having an answer by November carried the vote.

Barren County 911 Director Beverly Harbison brought the issue of paying for insurance for the board to the table again. The price, which is $14,994.33 is not in question, however, who pays what portion of it is. After much discussion, Mayor Harold Armstrong suggested that Bill Murray from the insurance company do a specific breakdown of costs to make it fair to both counties.

April Dunbar also made a brief presentation to the committee about PowerPhones Site Licensed Training.

The cost at $10,699.50 only exceeds the current cost by approximately $1,000 but would add much-needed software, system maintenance, and other needed features. Both Harbison and Dunbar stated that it would help in the training process, weeding out people early on that did not have the proper temperament to handle 911 calls.

It was agreed upon by the committee to move forward.

Towards the end of the meeting, the conversation returned to issues persisting between Barren and Metcalfe counties. The inter-local agreement, which has been in existence for decades, was mentioned.

“If we’re going to break this down properly and sit down with level heads to fix this we need a new inter-local agreement,” said Armstrong.

Larry Poteet spoke up to say, “You can’t put a price on someone’s life. I don’t want to split and I don’t want to sound like I’m against Metcalfe County. I’m not. But we have problems that have to be resolved. But we can’t communicate this if no one shows up you’ve got to be here. Communication is what we need gentleman,” said Poteet.

Harbison and Honeycutt both inquired as to whether or not Metcalfe County’s 911 planned to pay the current bill.

“If we want a resolution you have to show up to protect your interests,” said Harold Armstrong.

The board will meet again on November 22. 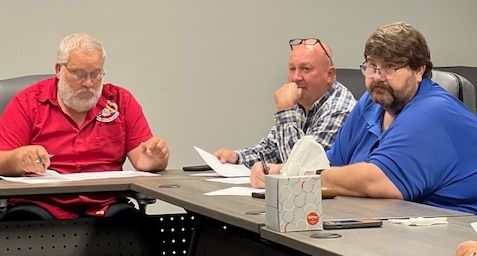 Gary Fancher, Curt Estes, and Emory Kidd were present to represent Metcalfe County. Estes and Kidd had no specific answers for the board about their county’s plans for resolving the 911 issues. Photo by Jennifer Moonsong