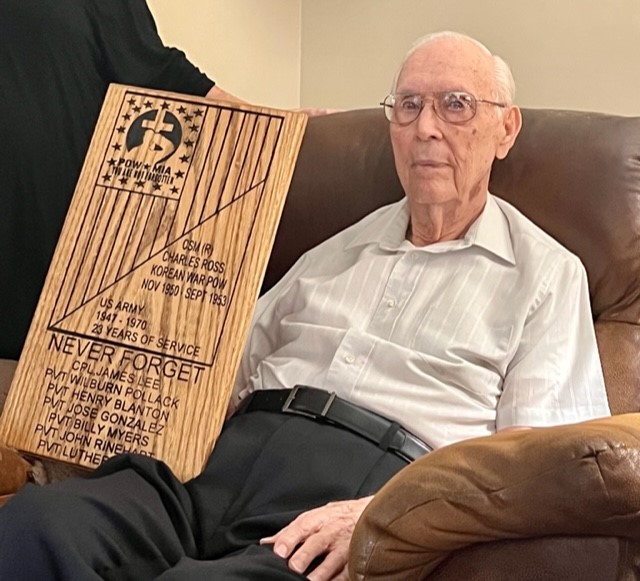 Ross, now 93, was in a prison camp in Korea for three years during the Korean War. He was released in 1953. To this day, Ross can recite the names of the men who served with him and died in captivity.

“Being a prisoner of war was the most trying time, but overall even with that particular period, I absolutely loved the time I spent in the army… I wanted to leave with beautiful memories and that I did.”

Ross was the oldest man in the squad at 22 years of age. The men who served under him were 20 and 18. Thursday, as part of the celebration of honor at his home in Cave City, he was presented with a plaque. Those young men’s names are carved on the plaque. He was also presented with a large box of letters from local school children thanking him for his service to our country. 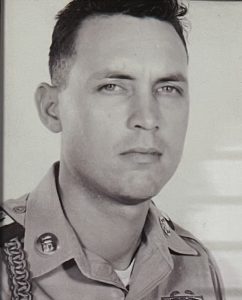 Ross when he was a young soldier.

“We are here to say ‘thank you’. ‘Thank you’ is probably the greatest thing we can say,” said Debbie Jeffries Reece, who helped organize the celebration.

Charles’ wife of 56 years and son Michael were present for the informal ceremony.

“Dad has gone through a whole lot more than I ever could. He refused to talk about his experiences in the Korean War as a POW for 50 years. He told me that watching those young men give up and die was the hardest thing he’s ever been through,” Michael said.

Charles Ross said that it was his brother who helped him have a change of heart and begin talking about his experiences.

“My brother lives in Florida and we would talk on the Internet back-and-forth every Sunday night. He told me he had seen my name online and something called the Korean War Legacy Foundation. Something overcame me, a change in my psyche if you will, and I wanted to talk about it,” he said.

Ross did not only open up and talk about his experiences, but he took it upon himself to write a memoir telling his story. Whenever he speaks of the past, he takes a note from his pocket and reads the names of the men who died at his side aloud.

Considering his almost 24 years of service, his military experience did not end with the Korean War. He was also a Vietnam Veteran. He has been bestowed with a Purple Heart, the Bronze Star, the Army Commendation Medal, and numerous other honors.

Today, there are several online resources and videos that recount Ross’s experiences as a POW. They tell of how he marched for four days barefoot in the cold, which has left him with neuropathy in both feet. They were in prison in the cold, with nothing but summer uniforms that were tattered and dirty. They talk of how he ate boiled corn to stay alive, and how he and his men were subject to lectures of propaganda.

He watched as many captives died, and he and others tried to conduct memorial services for those that died while imprisoned, even if they didn’t know their names. Ross along with many others were released when the war ended with an armistice agreement.

“We had dinner with a general, and they gave us a candy bar and a cigar,” he said.

Despite his experiences, he says that he would encourage any young person considering military service to “love their country and be ready to sacrifice.”

“I was never interested in politics,” said Ross. Rather, his interest was in people.

“I was more interested in what I could do to help the young soldiers with me,” Ross said. 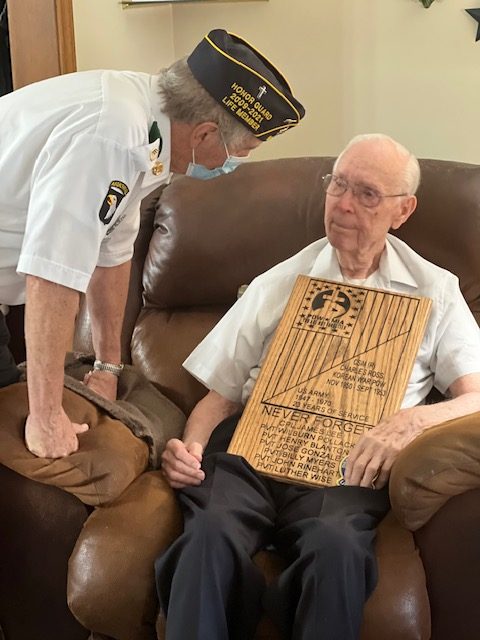 Ross and a member of DAV Chapter 20 talked about their mutual experiences. 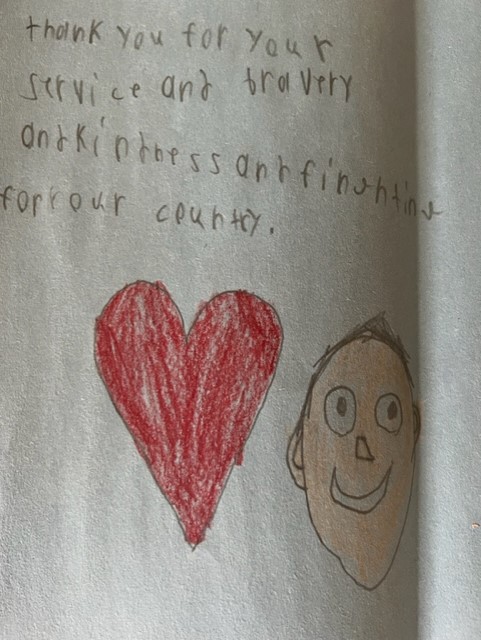 A letter penned by a student from South Central Kentucky, thanking Ross for his service to America.