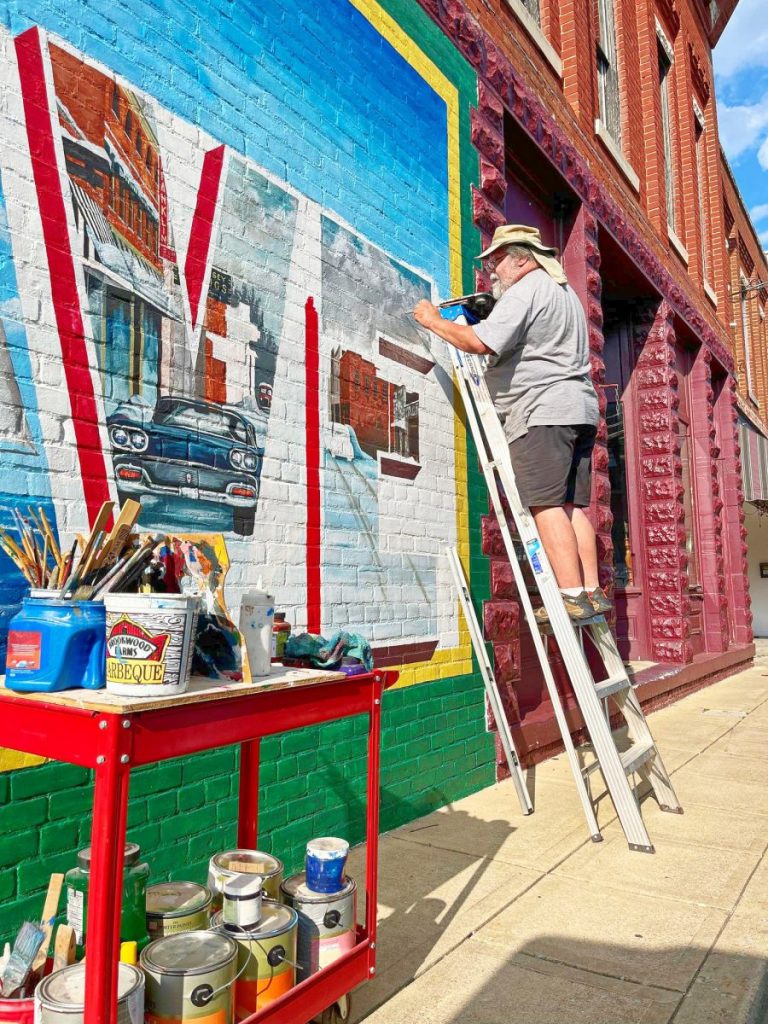 Local artist Jesse Sims created and painted the mural that can be seen in downtown Horse Cave. Photo submitted.

In the fall of 2019, local artist Jesse Sims was approached by a private group to commission a mural to be completed on the corner of the old Pierce building in Horse Cave, which is currently owned by Earlene Branstetter. In an effort to preserve history, the group wanted a mural depicting some of the past businesses and attractions of the city.

With his and his wife’s Sims Art Studio nearby, Jesse didn’t have to travel far to create the mural, but he did travel back in time to bring Horse Cave’s past into today’s present.

“We decided that this mural would not have any particular individual but just the attractions or businesses,” Jesse explained. “They (the group) wanted it to have a postcard nostalgia motif.”

Prep work on the wall for the mural began in October of 2019. The creation of the mural – which spanned over the course of three years – came with many setbacks and delays. First, Jesse had to perform minor tuck pointing and scraping before the wall could be primed. Then, the weather became too cold to work. Nevertheless, once the weather warmed up, another nuisance hit: COVID-19.

“According to the Department of Labor and notices received throughout the pandemic, I was afraid to even work on the wall for fear of being reported and fined,” Jesse explained. “Yet, for most small business owners, there was no help to pay the overhead while we were not allowed to be open.”

During that difficult time, along with the stress of trying to figure out how to stay afloat, Jesse began having heart issues, which further complicated matters.

“Once we got to open back up around August, I was trying to juggle getting frame orders, paintings, and getting back on the mural,” Jesse said. “Then the tornadoes came through this past December, which dealt another blow to us as we are still trying to get opened back up.”

All told, if the mural would have been created in back-to-back days, Jesse has at least three months worth of work in painting the mural, not including the time for research and creating the design drawing.

“I hate that the circumstances that followed happened that made the project drag out and took some of the joy out of creating the piece,” Jesse said. “Who would have thought that we would experience a pandemic like we did and how that would affect people? We are still trying to catch up since the pandemic. I am thankful to still be here, but it has been stressful since the spring of 2020 and there were times when I was ready to give up.”

The mural depicts some of the past businesses and attractions of the city. Photo by Hart County Tourism.

But Jesse didn’t give up. With help from his wife, Jennifer, and their son, Draven, the mural is now complete and stands as a pillar of Horse Cave history for present and future generations.

According to a Facebook post from Hart County Tourism, “The mural celebrates the history and culture of the tiny town built on top of a cave. (Jesse) Sims researched historic photos and conferred with community members to capture the historic scenes that are arranged in the fashion of a colorful historic postcard – a perfect photo spot for visitors and locals.”

Further information from Hart County Tourism explained what each painted letter within the mural represents:

Jesse said he was thrilled to receive a commission to create the mural for the city and its people.

“Despite the hurdles of the last couple of years, I am very pleased the mural turned out like it did and hope the community enjoys it,” he said. “I have really been pleased with the questions asked of what each letter represented and the responses once people learned that we had an Ocean Breeze bottling company here, a nationally known theater, a long forgotten monument to the  cave explorer Floyd Collins, and just a scene of the commerce of downtown – all of this and more in just a little town with a beautiful cave running beneath it!”

Everyone is welcome and encouraged to visit downtown Horse Cave and take a photo in front of the mural. 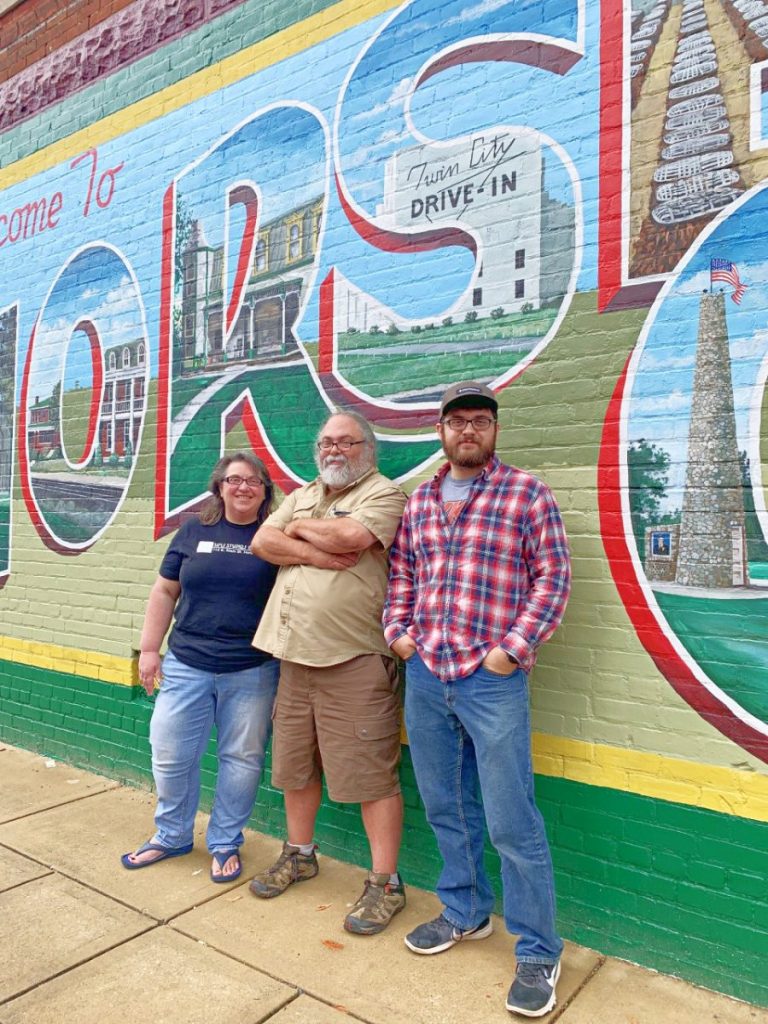 Jesse Sims, center, created and painted the Horse Cave mural along with help from his wife, Jennifer, and their son, Draven. Photo by Hart County Tourism. 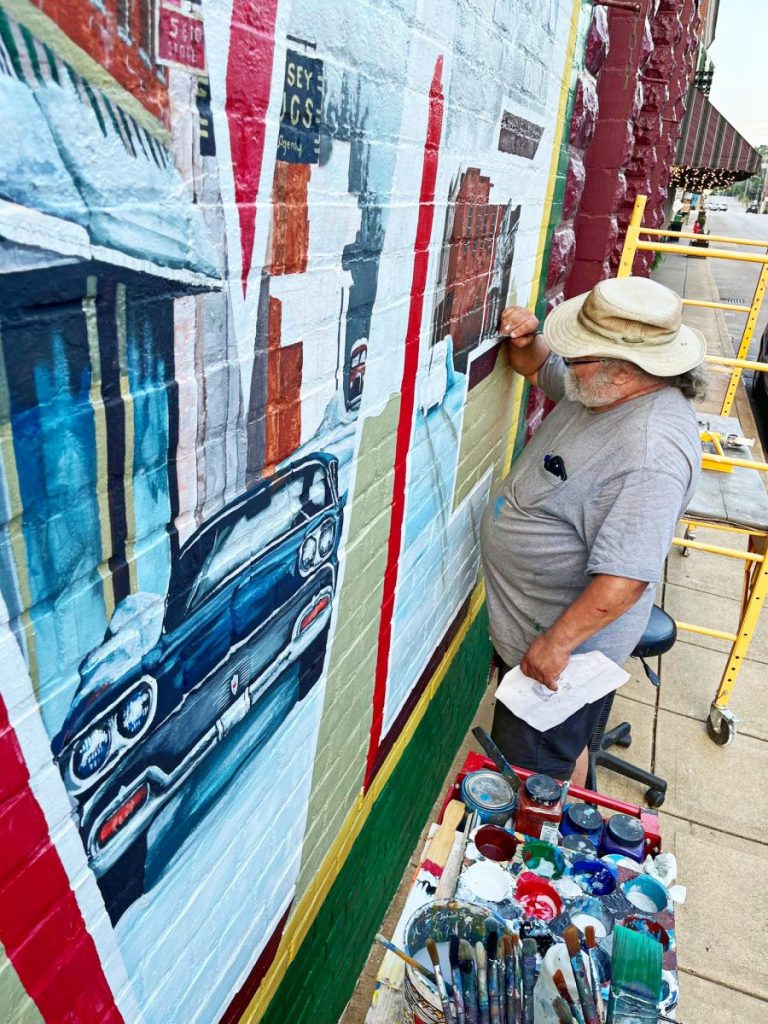 Jesse Sims put forth much thought and effort into planning and creating the mural in downtown Horse Cave. Photo submitted. 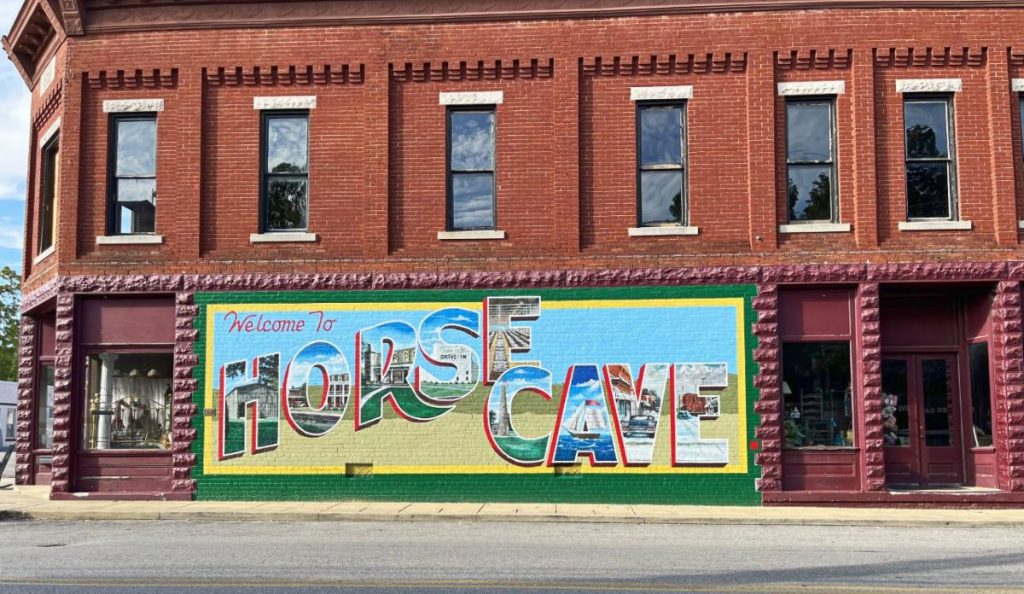 Artist Jesse Sims completed the Horse Cave mural on the corner of the old Pierce building, which is currently owned by Earlene Branstetter. Photo by Hart County Tourism.