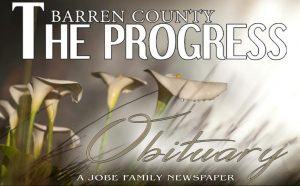 GLASGOW – Carolyn Cox, age 60, passed away Tuesday, September 13, 2022, at The Medical Center of Bowling Green. She was born in Orlando, FL, on October 10, 1953, to the late William F. Thomas and the late Winifred (Tracwick) Thomas.

Carolyn was a homemaker and an Army Chaplin Assistant. She was raised Pentecostal.

In addition to her parents, Carolyn was preceded in death by one brother, Charles Thomas; one sister, Marsha Teuton.

The family of Carolyn has chosen cremation and no services have been scheduled at this time.

A.F. Crow & Son Funeral Home is both honored and privileged to be entrusted with the care of Mrs. Cox.