Following lengthy discussions on September 12 in regards to the judicial center project, Glasgow City Council members voted to approve a resolution that will allow the city to enter into an agreement with Barren County Public Properties Corporation to allow them the option to purchase city-owned property.

The 3.26 acreage the city agreed to sell on West Main St. sits to the north and west of the Dollar General Store. It will also include Ford Drive. The total acreage estimate for the entire project is 4.3 acres. The Glasgow Water Company and Dollar General Store own the other properties that will house part of the judicial center as well.

Council members approved two amendments to the resolution that changed the wording from “Barren County Magistrates” to “Barren County Public Properties Corporation” and to attach the tract map highlighting the specific property tracts to be attached as “Exhibit A.”

Presentation details were provided by Danny Rhoades, Executive Officer for the Dept. of Court Facilities with the Administrative Office of the Courts (AOC) as well as the Project Architect, Tom Potts with Silling Architects out of Charleston, West Virginia.

Rhoades said the local Project Development Board (PDB) provided AOC with the recommendation for the current property proposal and that the AOC was in full support of the site location. He also said the location meets all the requirements needed for square footage, parking for both public and staff, pedestrian / exterior traffic, and secure parking for elected officials.

Potts said despite a number of location sites in Glasgow, the West Main St. property was ultimately chosen for the judicial center.

“It’s our position that this, I believe this strongly, that this would be one of the most important, if not the most important, public buildings constructed in the city of Glasgow and in the county for decades—and for decades to come for what it represents,” Potts said before detailing the acreage and specific locations with a projected image for those in attendance to view.

Potts said the proposal encompasses roughly 4.3 acres and at this time, the project is in a phase referred to as a test fit study.

Potts explained that steps have been taken for a design but in no way is it final since the development of the building itself will relate to the land available to purchase for it.

AOC provides the architect company with standard documents and information to define the needed building sized based on all the components.

“We’re able to understand how the spaces are to relate to one another, arrive at a gross square footage and how the building would stack from the lower floor, main floor, and second floor,” the project architect explained.

Theoretically, Potts said, the actual building would meet AOC standards if constructed in the same location as the current Dollar General Store, and currently the plans are still dependent upon several factors including securing the other needed properties.

It is also expected to have an estimated 230 parking spaces as well as ADA parking and drive-in area for defendants in custody who are transported from the jail to the court.

PDB board member and Barren County Circuit Judge John Alexander and Rhoades indicated the other two property owners are awaiting the city’s commitment to sell the sought-after property before moving forward with their option-to-purchase agreements.

Alexander said the water company and Dollar General are “smaller parts of this whole…they’re wanting to make sure that we can get the option to purchase the big part” before they will be willing to give an option for their properties to be purchased.

Alexander indicated there was a sense of urgency for the matter before Rhoades explained the urgency further.

“The 90 days will allow us to get interim financing in place to close on these properties,” Rhoades said, “Bonding participation notes (BPN) have to be issued for that interim financing—we can’t issue BPNs until we know what the cost of the site’s going to be.”

That will allow them to determine how much money will be needed to borrow for the properties, he said.

Property locations for the judicial center have been tossed around for quite some time and mostly behind closed doors.

Most recently, in mid-August, Barren County Fiscal Court voted in favor of a proposal for a 180-day option to purchase “up to” 5.098 acres of land from the City as it pertains to the construction of the long-awaited new judicial center.

All magistrates voted to approve it while Barren County Judge-Executive Micheal Hale was not in favor of purchasing the acreage noted in the motion citing the judicial center project wouldn’t require that much area.  Hale is a proponent of the City of Glasgow building a Farmers Market beside the Justice Center and felt the move by magistrates was a power move to stop it.  The general consensus of the magistrates has been the judicial center project is a priority and shouldn’t be pushed to a corner.

In late August, the Glasgow City Council voted down (5-4) the request made by the county for sale of up to 5.098 acres located on W. Main Street although they weren’t completely opposed for the sale of some of the property.

Glasgow Mayor Harold Armstrong responded to questions and said he believed the counter was an example of compromise from all involved.  The magistrates are getting more land than initially offered but not it all and has a road entrance connecting Main and Water Street separating the land kept by city.   This will allow the city to build whatever they like on their remaining smaller lot approximate size of 1.29 acres in the desired location across from Green Mechanical.

The counter offer now goes back to the magistrates who make up the Barren County Public Properties Corporation for the final approval.  The justice center project is a county project in which the magistrates have struggled to stay involved and they have been unified in their effort.

Councilman Freddie Norris closed the discussion by asking Barren County Judge-Executive Micheal Hale what are the plans for the old location and he said the old courthouse would need a little interior work before anything.  But his intention would be to move county government operations back there and use the North Public square location facing the courthouse as a small business incubator.

Those discussions will come in the months ahead with an almost entirely new Fiscal Court.

Construction of a judicial center was approved by the General Assembly in 2020 when $32-million was earmarked for the project. 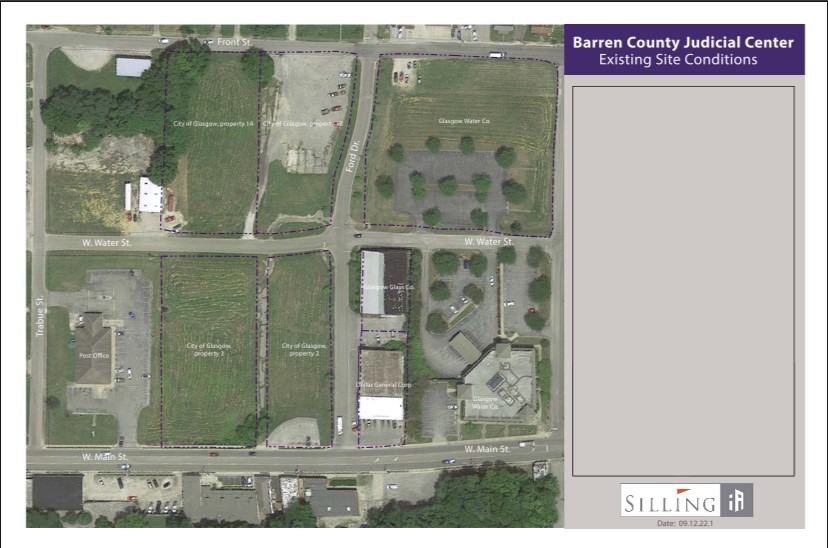 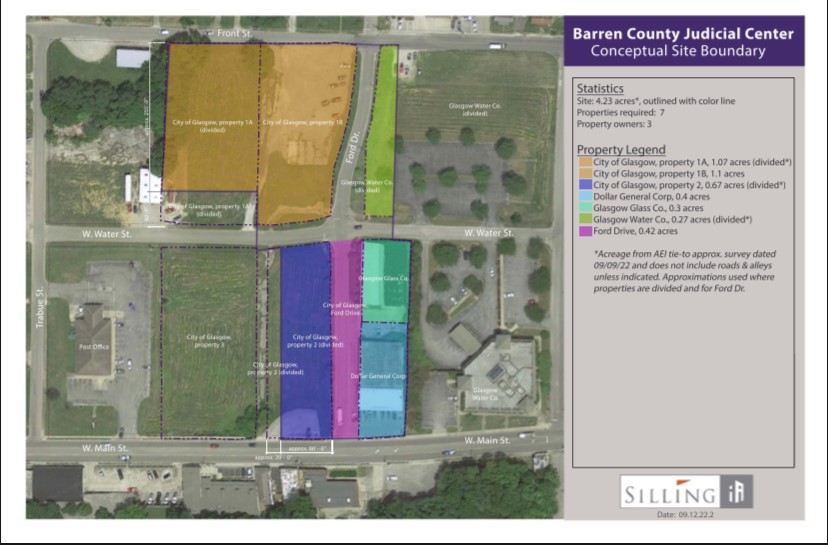 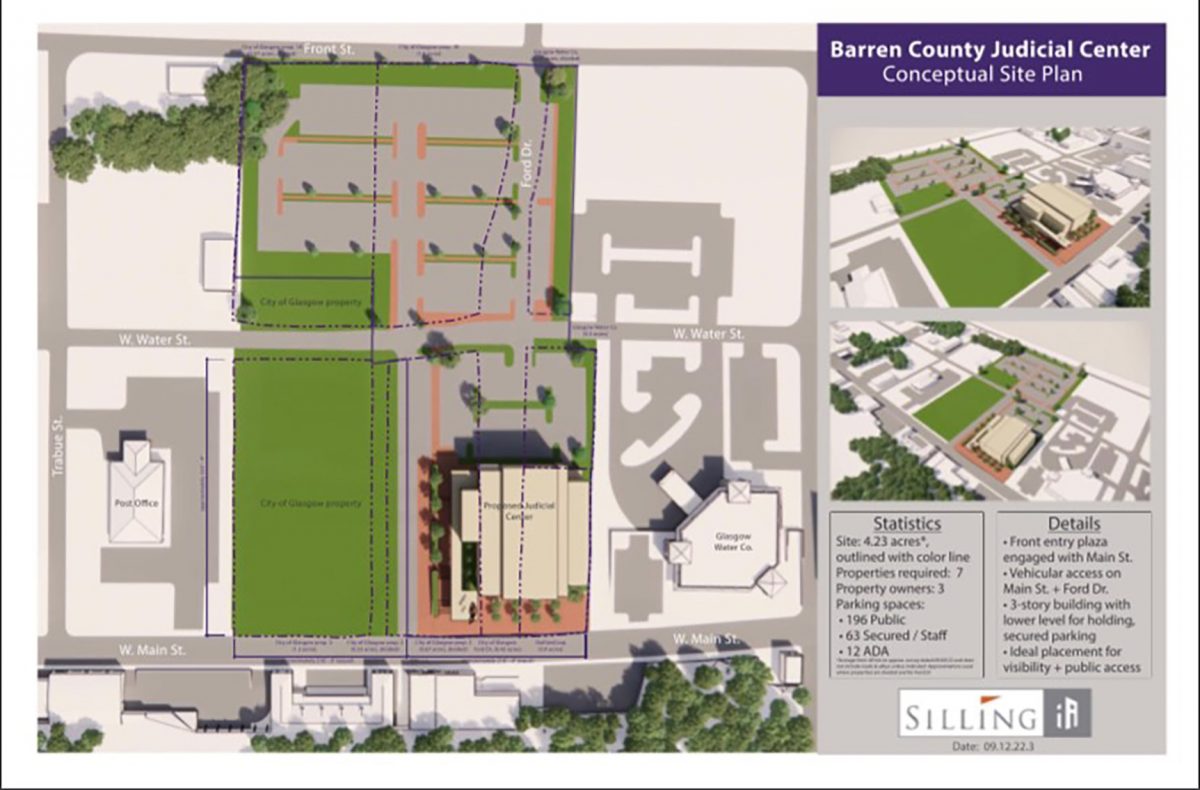 This image was shared by Silling Architects and presented to the Glasgow City Council at its regular meeting Monday. The council unanimously approved a counter to allow the Barren County Public Properties Corp. to have the option to purchase all except approximately 1.3 acres of green at the bottom left.