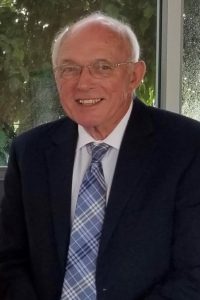 Frank Barrett Riherd, age 88, passed away in the arms of his loving wife and daughter at his home on Saturday, September 10, 2022, in Glasgow, Kentucky.

The Barren County native was the son of the late W.T and Mary White Riherd. In addition to his parents, he was preceded in death by his daughter, Susan Riherd, and his brother, Joe Riherd.

Frank was a devoted Christian and a longtime member of Glasgow Baptist Church, having served as a deacon and Sunday School teacher. He was the owner and operator of Riherd’s Sport Shop for many years. In addition to beekeeping, his hobbies were hunting and fishing.

A celebration of Mr. Riherd’s life will be held at 6:00 PM Thursday, September 15, 2002, at the Glasgow Baptist Church. Visitation will be on Thursday afternoon from 4:00 PM until time for the service at the church. A. F. Crow & Son is honored to be entrusted in the care of Mr. Riherd and his family. Please share your condolences with the family at www.crowfuneralhome.com.