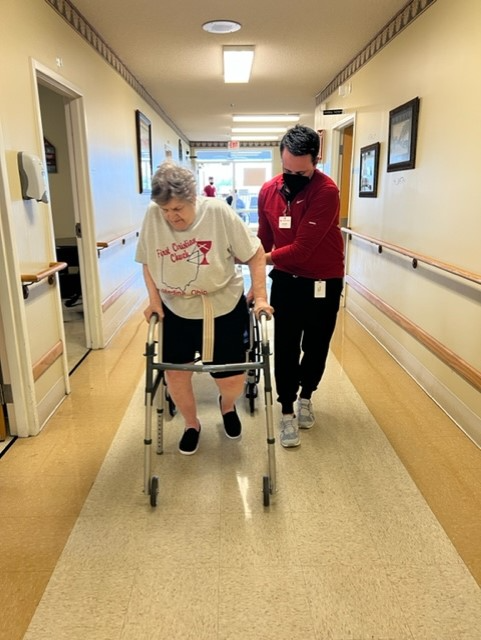 Evelyn Demchik, a resident, being assisted in PT by Zachary Smith. Photo by Jennifer Moonsong

When Glasgow’s Zachary Smith was only five years old he had his first surgery for scoliosis. Throughout his childhood, there were seven surgeries which led to a tremendous amount of physical therapy and inspiration.

“It was a big part of my childhood. And not one of the surgeries were what I’d call very serious, but I did have a lot of PT,” said Zachary, who still has corrective rods in his back.

First, his father Jimmy decided to leave a life of factory work to become a physical therapy assistant (PTA) and help others like his son.

Then in his twenties, Zachary followed in the footsteps of his father and of many who helped him along the way and went to work as a PTA at Barren County Nursing and Rehabilitation.

“I knew from the time I was about sixteen that this was my path in life,” said Zachary. However, in the early days, he thought that perhaps you might wind up in sports rehabilitation, but over time he turned his eyes to geriatric care.

Smith departed his job, to further his education. He got his Doctorate from South College in Knoxville and is now a Physical Therapist.

With Smith’s Education job opportunities are available across the country, but he and his wife decided to stay in Glasgow, and he decided to return to Barren County Nursing and Rehab as a Physical Therapist.

“He said it’s felt like home,” and Pam Rock, admissions Director of the facility.

“He has a special touch with this, there are people here who would run 10 miles for him,”

Zachary agrees that it is his calling, and says that the most rewarding part of the job is to see someone at Walmart, or out at a restaurant who you have worked with, who perhaps did not see a light at the end of the tunnel, but who have rehabilitated their lives.

“The first thing I do is get an idea of where they are with their recovery, and then where they want to be and I work to get them there,” said Zachary.

“It’s a good feeling to watch them improve.”

Smith says he will spend his life in the service of others as a physical therapist, and can’t see himself doing any other thing.

Although he wants his children to pick their own path, he says that their old dad wouldn’t mind at all if they choose to follow in his steps.