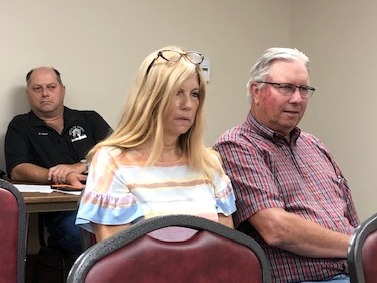 Sheila and Mike Sexton were in attendance at the fiscal court meeting to ask about the dimensions of the bridge planned for the Randall Sexton Road. Jailer Randal Shive is also pictured. Photo by PJ Martin

The Metcalfe County Fiscal Court met in regular session on Tuesday, August 23rd with all members in attendance.

The first order of business was to approve the Voting Precinct lease Agreement with Jerry Taylor for the Savoyard Precinct. This takes effect October 1, 2022, and allows the use of the property to be leased for $1 and the Taylors will continue to maintain the property.

Magistrates approved the 2022 compensating tax rate for the county with real property set at 8.7 which is down from 8.8 last year. The personal property rate is 10.0 and the vehicle and watercraft rate is 8.2.

The court acknowledged the tax rates set for the following taxing districts.

Ambulance District rates (down from 6.0):

The court acknowledged the Soil Conservation District tax rate of 1.6 on real property at the previous meeting.

Not present was Matt Hunt of the Barren River District Health Department who was scheduled to speak at about the increased cost of funding and the possibility of creating a district tax.

The court also reviewed the reports for the recycling center and the road department.

Magistrate Kenny Scott asked Judge/Executive Harold Stilts if a new animal control officer had been hired yet and Stilts replied that yes, Danny Smith had been hired the previous week.

Magistrate Ronnie Miller introduced Mike and Sheila Sexton who were present to discuss the bridge plans for Randall Sexton Road. The concern is the width of the bridge for farm equipment and school buses use and also tile size to handle flooding.

Stilts advised that the state has returned the contract for the bridge monies and the width would be 16 ft. Magistrate Miller is going to view the bridge plans and discuss them with Stilts.

Judge Stilts reminded the court about the future need to decide on 911 funding. Formerly landline fees of $1 were funding the 911 system, but with landlines fading away another type of funding is needed.

“We are going to have to figure out somehow to fund that in the future. Barren County’s looking at adding a fee on the tax bills,” noted Stilts.

Miller questioned the type of fee and Stilts explained a fee similar to the fire department’s set fee. “We need to look at some way to fund the Barren Metcalfe 911. So y’all be thinking about what we need to do there, because we’ve got a meeting with them next month,” said Stilts, “That’s something you need to think about between now and the next meeting.”

The next meeting was set for Friday, September 16th at 9 a.m. in the fiscal courtroom.