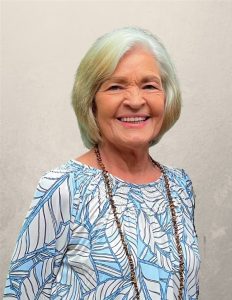 Judy Belle Alexander Stokes passed away peacefully at her home in Bowling Green on Friday, August 19, 2022, following a courageous, short battle with cancer. She was comforted throughout by loving family and friends. As in the rest of her life, she was braver and stronger than she imagined while remaining thoughtful, funny, brilliant, charming, generous, kind, and beautiful throughout this chapter.

Judy’s unique passion for life and strong family ties kept her decades younger than her 79 years. Born in Glasgow, KY on February 3, 1943, she was the fourth child born to the late Robert Oliver Alexander and his wife, Margarett Matthews Alexander, and thus, descended from some of Barren County’s pioneer families. She was the granddaughter of Arthur B. and Zoye Miller Alexander and James A. Sr. and Lillie Belle Depp Matthews, the latter being her namesake.

From an early age, Judy revealed a variety of talents, the most notable being a gifted musician. Regarded as the most outstanding musician in her family, Judy possessed a near-perfect pitch. She was an exceptional vocalist and pianist, but her musical passion became playing the trombone in the legendary Glasgow Scottie Band under the direction of Charles B. Honeycutt. With heartfelt pride, Judy wore the iconic kilt and regalia of the “Marching 100,” originally handcrafted by her mother and staff at Alexander Dry Cleaners. Years later Judy was a dedicated Scottie Band Parent who filled many roles in the life of the band, most notably as the keeper of the uniforms.

Following graduation from Glasgow High School, Judy, in partnership with her trombone, “Clarence,” earned a scholarship to Transylvania University where she was an active member of the Delta Delta Delta women’s fraternity. As a young adult, she entered the field of education and taught at Glendover Elementary School in Lexington. Judy later received a Master’s Degree in Education through remote learning from the University of Southern California.

While teaching, Judy met Robert Nelson Stokes of Elkton, KY. They married in June of 1966 and lived in several places, including Rota, Spain, before settling in Judy’s hometown of Glasgow. There, her focus became family and cattle farming as she cared fiercely for their two daughters and a large herd of Limousine beef cattle.

Judy considered her greatest accomplishment in life to be her daughters, Shana Stokes Woodyard (Jamie) and Allison Stokes Gorrell (Travis), who brought her much joy. In addition to her daughters, Judy is survived by four grandchildren, Alexander and Mariel Langley and Amelia and Silas Gorrell, and two step-grandchildren, Cayden and Kenley Woodyard. She is also survived by her sisters, Pryntha Alexander Hardenbergh and Patricia Alexander Nielsen, both of Lexington; Anna Alexander Wilson of Nicholasville; her foster brother, Robert “Bobby” Chapman of Georgia; her sister-in-law, Zara Alexander of Glasgow; as well as many nieces, nephews, and cousins.

In addition to her parents, Judy was preceded in death by her husband, Bob, and her brother Robert Matthews “Buddy” Alexander.

Friends and family are invited to join in a Celebration of Life for Judy on Saturday, September 10, 2022, at 11:30 a.m. at the Ole French Restaurant, 255 Perkins Road in Glasgow, Kentucky. In lieu of flowers, please consider making a memorial contribution in her name to these organizations that advocate for causes that were close to her heart: St. Jude Children’s Research Hospital, BRAWA, and the Glasgow Education Foundation.