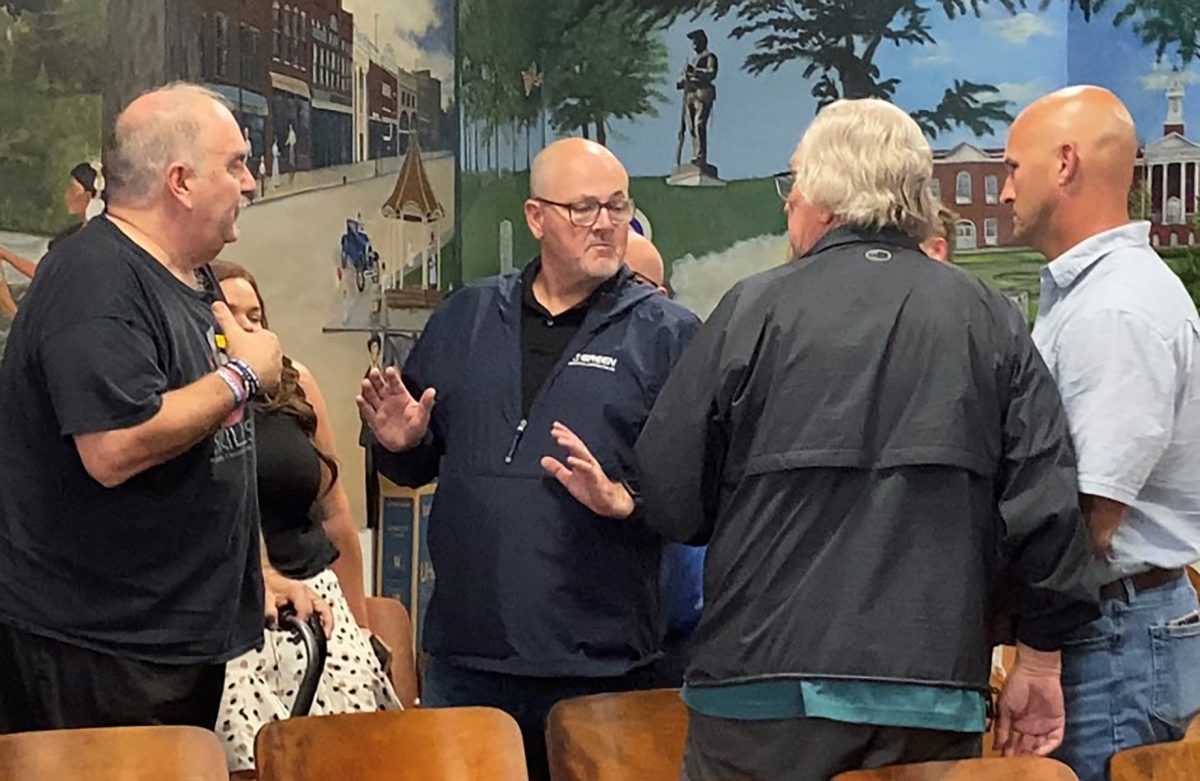 After a city financial meeting on May 26, 2022. Glasgow Mayor Harold Armstrong is surrounded by proponents of the Downtown Park Councilman Patrick Gaunce, businessman Don Baker and Judge-Executive Micheal Hale. The same three have now spoken out against the magistrates and the PDB board in their site selection for the $32M Judicial Center project; and perhaps stopping the city from realizing Armstrong’s long standing vision of building a permanent Farmers Market.
Councilman Wendell Honeycutt after the meeting said, the most frustrating thing is, “ .. the aggravation of putting the City first and not special interest and having people get mad about it.” Honeycutt has chosen not to seek re-election along with five of the seven county Magistrates.

Barren County Judge-Executive Micheal Hale makes another stand against magistrates, and this time they are joined by members of the Property Development Board (PDB).

In the August 16, 2022 Fiscal Court meeting, Hale proposed moving an item on the agenda forward because judges in attendance had busy schedules. Circuit Judge John Alexander and District Judge Gabe Pendleton, along with Rich Alexander, the law partner of Richardson, Gardner and Alexander, were present to represent the PDB.

The item was to go into closed session to discuss the pending location for the new $32M judicial center. The Barren County Progress (BCP) previously reported that the 2020 general assembly approved funding for Barren County to upgrade the court facility as it has other surrounding counties, including Allen, Metcalfe, Monroe, Hart, and Warren.

Total development costs will be managed by the Administrative Offices of the Court (AOC). Bonds will be issued and payments made to Barren County Fiscal Court just as they are the current courthouse. In real estate terms, it is pretty much defined as a triple-net lease. This means the AOC will be responsible for all maintenance and care. (However, maintenance must be requested by the County-Judge Executive in order to be addressed. The BCP has disclosed no requests had been made in years other than a lock repair for our historical building, allowing it to fall in terrible disrepair.)

Once coming out of closed session, the tone for Hale changed. Magistrate Tim Coomer said a decision had been made. He moved to submit a 180-day option to purchase up to 5.098 acres of land on West Main Street. It was seconded by Magistrate Trent Riddle.

Hale immediately began to speak, stating he was voting against it. It is important to make it clear for readers, as Barren County Judge-Executive he is also Chairman of the PDB. Hale said he would be voting against the unified effort of the groups.

This is a situation in which Judge-Executive Micheal Hale voted against a motion coming out of closed session with Magistrates Billy Houchens, Trent Riddle, Kenneth Sartin, Carl Dickerson, Jeff Botts, Mark Bowman, and Tim Coomer, as well as PDB members Judge John Alexander, Judge Gabe Pendleton, and local attorney Rich Alexander.  Hale was alone in casting his “No” vote.

Hale explained he was voting against it because the magistrates had voted against him wanting to do park expansion and believed they were trying to buy more than they need. Hale said money was in the budget to purchase the land. However, he disagreed with the decision to do so.

“I’m not sure why we feel like we need to purchase land using our money,” Hale said.

In response, Coomer said, “This probably will be State money purchasing what we need of this land, not the county.”

“Then I feel the State just needs to purchase it because I feel all we’re doing is a control factor,” Hale countered.

It wasn’t clear what Hale meant by park expansion or control factor, however because of his routine to enlist exclusive interviews with a local radio station and a Bowling Green television station when votes do not go his way it may have helped shed light on his meaning.

Local business and land owner across the street of the city owned property in question, Don Baker commented in writing, “To say that I’m disappointed in the Barren County Magistrates and select members of the PDB (Project Development Board) would be an understatement.

Their upcoming attempt to “steal & kill” the downtown park, via a hostile land-grab, is a smack in the face to many who have worked so hard to make it a reality.

This land was purchased from the Bale family under the pretense of a park, and we should honor that commitment. The Kentucky League of Cities and our local Chamber of Commerce have endorsed this project, labeling it the catalyst for downtown revitalization.

Ask your magistrate why they want more land than they need? They will tell you it’s to protect what gets built around their project. Soooo…did we buy everything on the square when it came up for sale to “protect” the courthouse? I think not!!

Stand firm, City Council members…It’s the only downtown green space we have left…Tell these park killers NO!!!”

A follow up with Magistrates Coomer, Dickerson, Riddle, and Botts (others couldn’t be reached) confirmed they had no interest what-so-ever in stopping the project Baker was referencing. Their only interest is to cooperate with the PDB and move the Justice Center Project forward.

“This is probably the biggest project our community has ever done, and it should be the centerpiece of whatever land it is placed on,” said Riddle.

Most would think any project having the support of all magistrates and a board comprised of respected community leaders such as John Alexander, Judge Gabe Pendleton, Krissie Coe Fields, Rich Alexander, and Joan Norris would be an easy pass to the Glasgow City Council for approval.

However, even with two years of meetings, research, and site visits, it is still very likely the political ally of Hale – Glasgow City Councilman Patrick Gaunce – will be poised to split the Council enough to stop the option approval, even though it is documented that Gaunce himself purchased a property, offered it to the PDB, and has quietly lobbied for it to be chosen.

The Glasgow City Council meeting of Monday August 22, 2022 will surely be an interesting one to watch.