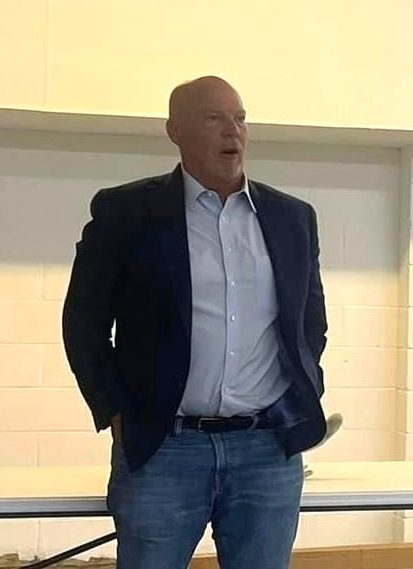 During the meeting, special guests took the floor to speak, answer questions, and address concerns.

Horse Cave Mayor Randall Curry spoke very briefly to the committee on his intent to seek another term for Mayor of Horse Cave by stating, “I have a few more things down the pipe, and I’m just not quite ready to hang it up just yet.” Mayor Curry thanked the HCGOP for the invitation. 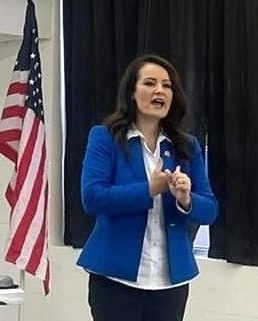 “We need more authentic Republicans in Frankfort, not the wimps that sat back and were complacent when Beshear locked down the Commonwealth,” Maddox concluded.

“I care about people. It goes to the core of my being,” Deters said. “I got in my truck Saturday (July 30th) by myself and drove down to Eastern Kentucky to see for myself at six counties. Talked to those people, gave them money…I didn’t even tell them who I was. I didn’t even tell them I was running for Governor. I just wanted to do something in my truck. When I’m Governor, that’s what I’m gonna do,.”

“I’m going to go after hard: Beshear and my Republican opponents. You know why? They are all full-time politicians their entire lives,” Deters continued. “Beshear: His daddy’s Governor, he gets elected Attorney General, then He gets elected Governor. Lockdowns, mandates, spying on churches, destroying whole industries…Now, let’s talk about my opponents. Daniel Cameron: gets out of school, he gets a job at a federal judgeship that McConnell made, then he goes to work for Sen. McConnell, then he becomes Attorney General, now he wants to be Governor. Mike Harmon: State Rep., Auditor, Auditor, he needs another job. Ryan Quarles: countless political jobs. Savannah Maddox has never worked in the private sector. She was Republican Youth Chairman for Grant County. She works for Rand Paul. She works for Thomas Massie. She works as a State Representative…it’s politics, politics…The total number of jobs, I’ve added it up, 19 political jobs. Every single one of my opponents is a full-time, double talking politician.”

Later on, things got a little heated when the question session opened up for Deters. That’s when a campaign staffer for Savannah Maddox asked Deters, “Why did you endorse Andy Beshear and donate to Hillary Clinton?”

“When Hillary Clinton – now remember Donald Trump wrote lots of checks to New York Democrats – was running against Barack Obama, I supported John McCain. My daughter is a liberal. She wanted to meet Hillary Clinton,” Deters explained. “…There was a fundraiser up in my neck of the woods. I wrote a $1,000 check so my daughter could get her picture with Hillary Clinton. I put my arm around Hillary, my daughter’s arm was around her, and we smiled, and we got the picture, and I got it hanging up in my studio, and I wrote, ‘I did this for my daughter.’ They take that picture, they crop my daughter out, and they act like I’m this big Hillary Clinton supporter.”

“Now let’s talk about Beshear,” Deters added. “I go to a Boone County Republican function. [Bevin] offers to raffle-off going to the Kansas-UK game with him, and I say I’m going to bid on these…2,000 bucks. Then all the sudden, Bevin didn’t want to go with me. It was weird. Then he said he wanted to go to another game with me. Then it was weird. I supported Bevin when he ran for Governor. I asked him for one personal favor. It was to read something. He ignored me. It pissed me off. So this guy, just like all the politicians, they do it to all of ya, you know how they are. So like a week before the election, I announced I’m voting for Beshear, and I did. Guess what I did unlike any other politician? I apologized for that vote. I said, ‘That was a mistake. I shouldn’t have done it. I should’ve eaten my pride.’ But it was a personal thing with me…Now, you have to understand I had no idea I’d be running for Governor until Freedom Fest last year. People wanting pictures and saying I should run for Governor. I’m not thinking about like these politicians, ‘Should I do this? should I do that? How does this make me look?’ It’s a bunch of crap.”

“So this guy (Maddox campaign staffer), in front of all you, thought he’d hit me with some question that I’d be afraid to answer, and you know what? I answered the question,” Deters continued. “That’s the truth and the whole truth.”

The Maddox campaign staffer went on to say, “So, let’s see, you sold out your principles over UK tickets?”

The HCGOP Chair gaveled them down as the two began talking over one another. Then Deters continued.

“I’m going to go here, because they deserve this. You ready for this? Since he done this to me in a public forum, I’m going to do this in a public forum,” Deters said. “This woman right there, Savannah Maddox, who says she’s authentic, she’s an authentic phony, claims she’s this little churchgoing little girl. She has been involved in a relationship with Chris McCane, Thomas Massie’s field Rep. I got all the evidence, all the witnesses, and everything. A married woman carrying on with Chris McCane. I’ve said it publicly, haven’t been sued yet, so I wasn’t going to go there, but this little political nimrod here. This is what happens. This is why nobody likes politics right here. I’m tougher than a pine knot. If you throw a knife at me, I’m going to shoot you back.”

One committee member responded to Deters by saying, “Anybody that puts their arms around Hillary and votes for Andy, that tells me enough right there.”

“Fine. Don’t vote for me,” Deters responded back.

There was a pause in the excitement with questions regarding education, voter integrity, and urban v. rural issues.

Another committee member stated, “I just need to go down on the record that I do have a problem with your behavior. I think that you are a loose cannon and that you take it out on other people.”

“That’s fine. That’s fine,” Deters said. “But you know what? I’m going to be me and see where the chips fall.”

A visitor to the meeting asked, “You made an allegation a minute ago. Where’s your evidence?”

“I got eye witnesses and an investigative file,” Deters said.

The visitor followed up with, “So, are you going to publish your evidence?”

Deters responded, “No, don’t have to.”

“Then it’s nothing more than a mere allegation,” the visitor replied back.

An HCGOP committee member said, “I thinks it’s ridiculous we make comments and charges on a lady that’s here.”

“You know what?” Deters said. “I’m not gonna get attacked and return fire.”

After that quick exchange, things settled down, and the question and answer period continued, finished up, and concluded.

Also during the meeting, HCGOP Chairman Asa Waggoner addressed new business. The Chair read to the committee the completed censure of Secretary of State Michael Adams for those not in attendance last meeting.

No new members were added. The Chair tabled updating the committee membership rolls until next the meeting with roll call for quorum to begin as normal procedure.

The HCGOP committee voted unanimously to add an amendment to the original censure of Senator Mitch McConnell from last February 2021 to “no longer recognize Sen. Mitch McConnell as a Republican” after finding out the Senator voted for the Safer Communities Act, which the committee stated is unconstitutional and violates the constitutional 2nd Amendment rights of Americans by pushing Red Flag Laws on states for federal funding where a judge, who is petitioned by someone believing that someone may commit a crime, could have their weapons seized for a crime “not yet committed.” The committee also stated that it will, “cease all support and separate this committee from him due to his failure to lead in a bold and strong, conservative, and productive manner to protect fiscal and social demands of the Commonwealth and the United States.”

In addition to old business being discussed, the meeting was adjourned. The next scheduled HCGOP meeting will be held on Monday, September 12 at 6:30 p.m. CDT at the Hart on Main, located at 301 Main St. in Munfordville.