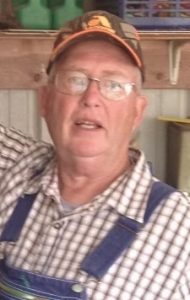 Samuel Steven “Steve” Ennis of the Grab Community of Green County, son of the late Verman Cook Ennis and Virgie Alice Trowbridge Ennis, was born on Thursday, October 21, 1948, in Green County and departed this life on Wednesday, August 10, 2022, at the Jewish Hospital in Louisville. He was 73 years, 9 months, and 20 days of age.

He had made a profession of faith in Christ and was a member of the Russell Creek Missionary Baptist Church where he served as a deacon. Steve had worked for the former Clark Casual Furniture Manufacturing for 24 years, but he was also a lifelong farmer which was a love of his. Steve loved traveling especially to tractor shows. Green County was special to him along with its history in which he took part and was a member of the Green County Historical Society. Auctions and trading were wonderful pastimes that he enjoyed. Jerry Arnett, one of his best friends who passed away this past year, was a great loss to him. Going to Jerry’s store, hanging out, and loafing with all the passersby was a special part of his life. With all this said, he especially loved spending time with his grandchildren, and his nieces and nephews.

Survived by his beloved wife of almost 22 years, Norma O. Houk Ennis of Green County having united in marriage on September 8, 2000.

Other survivors include two step-daughters, Karen Blevins Overstreet and her husband, Mitch, and Kim Blevins and her husband, Michael Johnson all of Campbellsville; a sister and brother-in-law, Phyllis Ennis Coomer and Kevin Coomer of Knob Lick; grandchildren, Daniel Stearman and his companion, Amy Todd of Campbellsville, Alex Blakeman of Ohio, Gabrielle Naylor and her husband, Christian of Russell Springs, and Molly Pyles of Bowling Green; a great-granddaughter, Rosemary Naylor; niece and nephew, Cory Coomer and his wife, Christina, and Lindsey Coomer Cox and her husband, Cody all of Knob Lick; great nieces and nephews, Jase and Ella Coomer; and a host of other relatives and friends.

Besides his parents, he was also preceded in death by a sister, Peggy Sue Ennis; and a great-nephew, Myles Coomer.

The funeral services were conducted on August 15, 2022, at the Cowherd and Parrott Funeral Home with burial in the Center Cemetery in Metcalfe County. Bro. David Dicken, Bro. Caleb Owens, and Bro. Charlie Houk officiating.

Memorials are suggested to: Center Cemetery Fund, Russell Creek Missionary Baptist Church, or St. Jude Children’s Hospital which can be made at the funeral home. www.cowherdandparrott.com