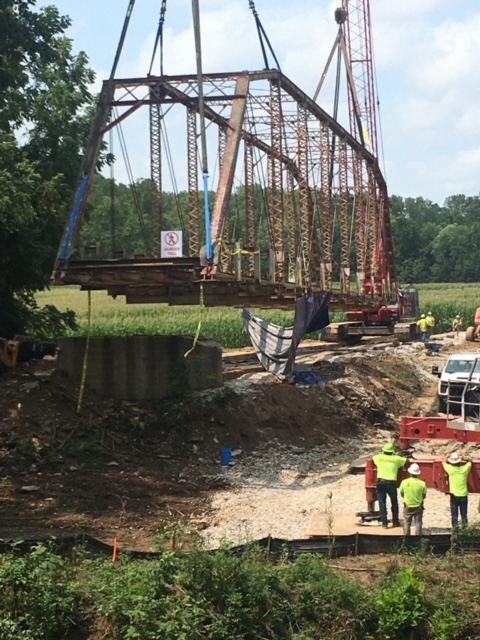 Two large cranes lift and guide the bridge from its piers to the ground to be dismantled and trucked to the Edmonton Memorial Park. More photos inside. Photo by Bill Lagermann

Locals watched as the bridge on Mosby Ridge Road was lifted and removed from the position it has held for many years over the East Fork Little Barren River.

According to national bridge inventory data at Bridge Reports.com, the bridge was built in 1911 by the Champion Bridge Company. The bridge is one of the last 9-panel, pinned camelback bridges left. The bridge was brought from the Campbellsville area and installed at the current location in 1957.

According to Kevin Kelly, supervisor of the removal team, the bridge weighed approximately 9,300 lbs. and was lifted by a 360-ton crane that required 192 lbs. of counterweight to work. Those counterweights were delivered on 5 semi-flatbed trucks.

Inspection records going back as far as January 2006, classified the bridge as in poor condition and the structure appraisal stated that the bridge was basically intolerable requiring high propriety replacement.

Although locals and historical preservationists hate to see the bridge taken down, there is a new purpose for the old iron bridge structure which measured 151.9 feet long.

The City of Edmonton will take custody of the bridge and it is to be included in the park projects at the Edmonton Memorial Park as part of the walking trail.

Kelly also stated that the new bridge will be of box beam construction, 16 feet wide with 2 lanes.

The bridge is being replaced under the Bridging Kentucky Program. The program aims to improve the safety and soundness of the Commonwealth’s bridges by rehabilitating, repairing, or replacing critical bridges throughout the state. For more information go to http://BridgingKentucky.com. 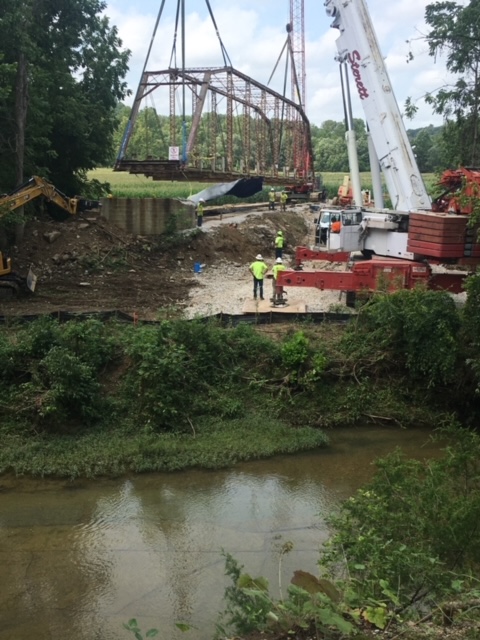 Another angle of the bridge as it is being lifted from its piers. Photo by Bill Lagermann 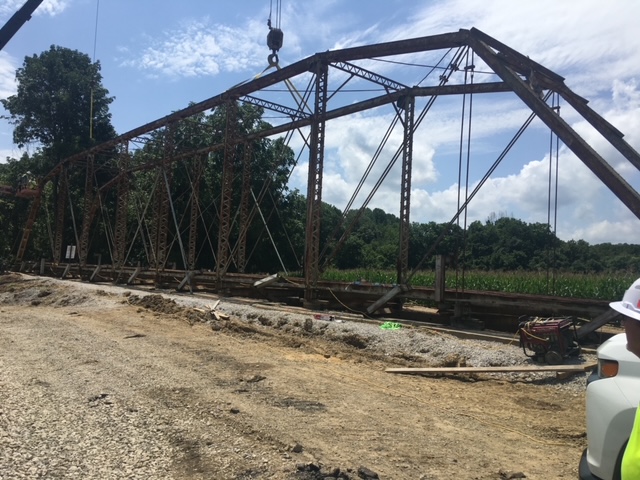 The bridge sitting on dry land ready to be dismantled. Photo by Bill Lagermann