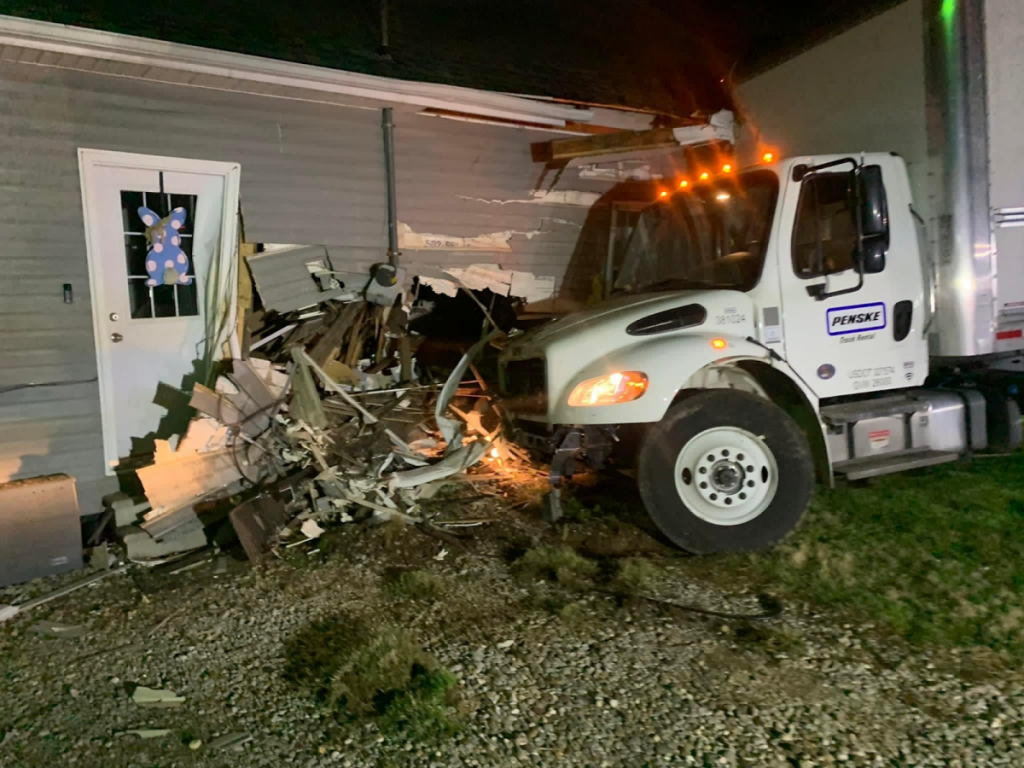 After colliding with Goodman’s house, the Penske employee told the officers he had wrecked previously, had been on administrative leave, and that this was his first night back to work. No sobriety tests were conducted. Photo submitted.

Family displaced for over 100 days and counting

At approximately 1:30 in the morning on April 9, Angela Goodman was asleep in the front room of her home with her daughter, 8-year-old Isabella, when a Penske box truck crashed into their bedroom.

“Patrick had just gotten home from work and was upstairs getting ready for bed,” recalled Angela. “Isabella sat up out of a dead sleep, and it was nothing but from the grace of God. She said ‘Mom, what is that noise?’ I started to tell her ‘Nothing, lay back down,’ and I looked out of the corner of my eye, and there were lights coming through the window. I reached and yanked her about the same time the impact of the truck hit the house. We were standing in the doorway of the bedroom, and I remember looking over at the wall, and there’s a truck with a DOT number on it.”

The truck had hit the side of the bed where they were sleeping and knocked down the wall that separated the bedroom and office.

“The driver was fine,” said Angela. “He told the officers he had wrecked previously. He said he had been on administrative leave, and that was his first night back to work. His exact words were, ‘I can’t catch a break.’ (He) never checked on us. His story was he was driving 40 miles an hour, over-corrected, and hit our house.”

However, Angela reports that there were black marks as far as a tenth of a mile up the road. The driver had run off the road at the farm across the street, tore up the rumble strip, hit the mailbox, swerved, and came over into Goodman’s yard, striking their house, which sits on a straight stretch of Lonoke Road. No sobriety tests were conducted.

The driver, who was a Penske employee out of Tennessee, was headed to Munfordville’s Napa and AutoZone when his truck collided with the Goodman home in the middle of the night.

Angela reported that Penske initially sent two representatives out of Nashville after the accident and that they took photographs and explained that someone from their insurance firm would be in contact.

“It’s a Risk Management Firm called Gallager and Bassett,” said Angela. “The first representative is no longer employed with the company, but they didn’t reach out and tell us, so I was calling every day and leaving messages.”

Angela called Penske in Nashville again after three weeks of no communication in May.

“The just kept saying that we just need to be patient, that this is the process, but after three weeks of that, they put me in contact with another representative,” said Angela. “We’ve been talking to him ever since (June), and he keeps saying the same thing…Penske has told us they realize they’re responsible, but that’s all we’ve gotten.”

The Goodmans sent in an estimate from a contractor over a month ago but still have heard nothing.

Over the course of the past 17 weeks, the Goodmans have watched their home sustain more damage.

“Our floors are starting to buckle,” said Angela. “The estimate we got was more than the rebuild cost, because of the electric and HVAC…We lived in an RV for 9 to 10 weeks, but ultimately we decided Isabella probably didn’t need to stay (there). Any wind or noise was just traumatizing to her, so we rented a house in Glasgow.”

Angela explained that Isabella has dealt with quite a bit because of the ordeal.

“An air conditioner unit came on in the art room at school, and she completely melted down…If I’m not in the same room as her, she’s worried something is going to happen,” Angela said. “She’s never not had both of us at home, all the time, so that too has been hard for her.”

Alen Beljin, Public Relations Manager for Penske, stated, “We understand the Goodmans are in a difficult situation. We apologize for any delays they may have experienced regarding their claim. We have escalated this matter internally. A company representative from our insurance department will be reaching out to the Goodmans directly today. We will provide an update once we know more information.”

No additional updates have been given by Penske at this time.

Representatives from Gallagher Bassett were unable to be reached for comment, but their website states that in 1962, the founders and namesakes “realized that opportunity lay in focusing on managing claims to superior outcomes…The opportunity for claimants to have their injuries and issues addressed more speedily, efficiently, and holistically.”

The Goodmans continue to wait for their speedy, efficient, and holistic outcome. 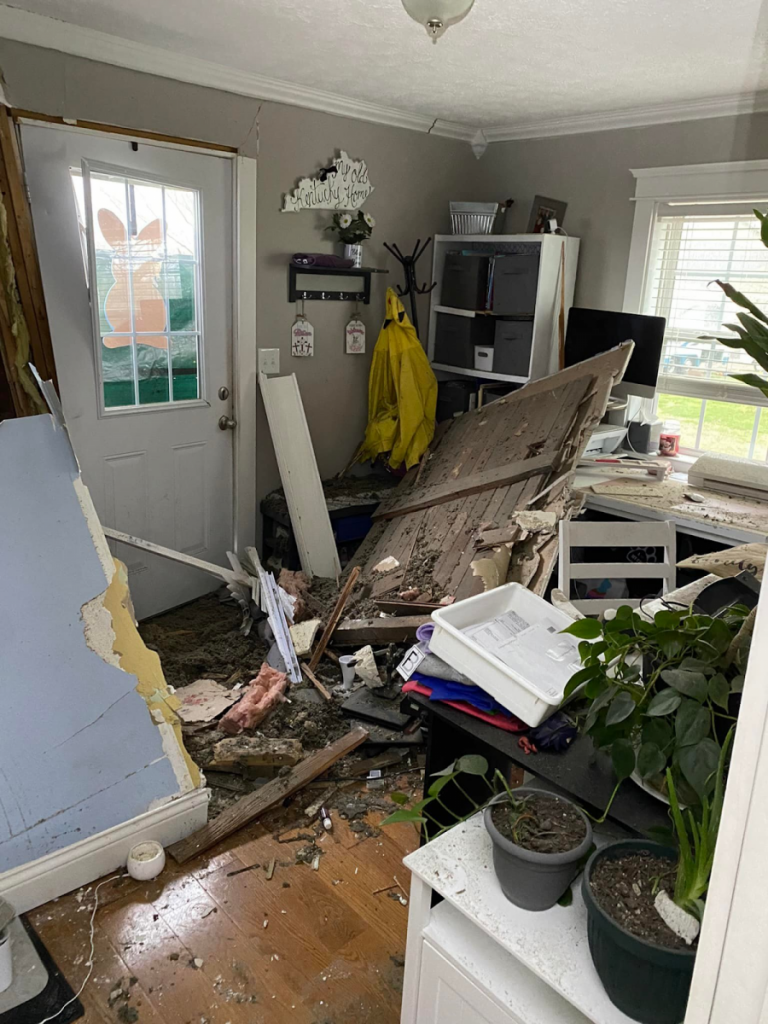 This damage was caused to the Goodman’s home after a Penske box truck slammed into their home on April 9. Photo submitted. 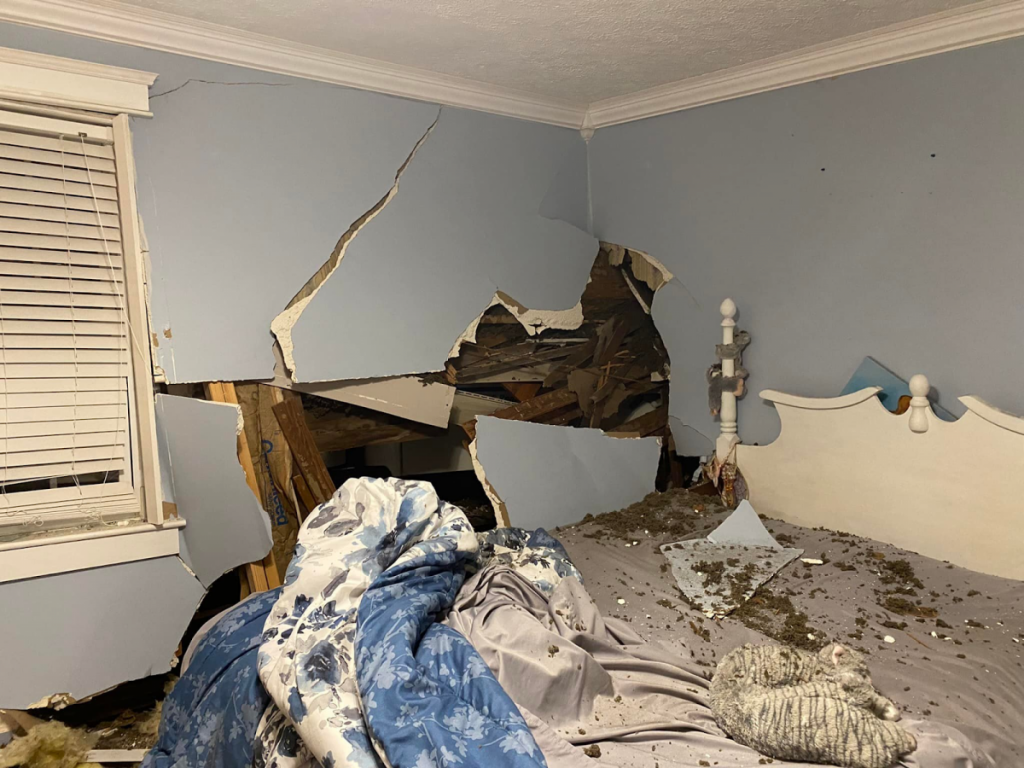 At 1:30 a.m, a Penske box truck crashed into the bedroom where Angela Goodman was sleeping with her daughter, Isabella. The truck had hit the side of the bed where they were sleeping and knocked down the wall that separated the bedroom and office. Photo submitted.