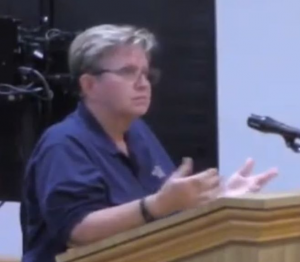 Councilman Wendell Honeycutt, pictured above at right, strongly opposed changes to the city’s nuisance ordinance brought forth by Code Enforcement Officer Cheryl Pena (left). Honeycutt cited the move is an infringement upon individuals’ rights. He suggested banning Blue Devils or orange ‘T’ sports signs before disallowing citizens to park in their own lawns. Photo/screengrab/GEPB 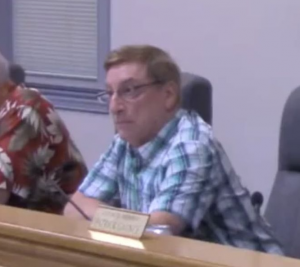 The majority of councilmembers were not in favor of amending the city’s nuisance ordinance §95.03 to add more specific language regarding homeowners and their properties.

If Pena’s ordinance amendment had passed, homeowners who park in their yard, have upholstered furniture outside their homes, and refusing to mow the right-of-way areas on their properties could have individuals in violation of the city’s nuisance ordinance.

Councilman Wendell Honeycutt asked Pena if there were safety matters surrounding the proposed nuisances before strongly opposing the move citing it would be an infringement upon an individual’s rights.

Pena said parking on the lawn does not generally cause a safety issue, but her concern is with the erosion of the ground in individual’s yards.

“I don’t believe that the council should pass laws that infringe on individual rights,” Honeycutt stated.

He further said, “If you want to pass a nuisance law, I’d just soon pass a law that says no Blue Devils signs and no orange T’s are allowed in the city limits because those are bigger nuisances to me than a car parked in the yard.”

He also pointed out scenarios where people may need to park in their lawn due to resealing a driveway.

Pena said temporary situations would not be considered and she is able to discern the differences between temporary parking such as having a barbeque cookout and those who are consistently utilizing lawns for parking.

Councilman James “Happy” Neal asked Pena what homeowners would do if they own three cars but only have room for two in their driveway.

“Put in some gravel-“ Pena replied.

Based on discussions, it is assumed council members were sent photograph examples throughout the city prior to the meeting.

Councilman Patrick Gaunce, however, requested for them to be shown in the meeting. Pena’s photographs included a variety of vehicles in yards throughout the city and explained the differences between a temporary and long-term parking situation. Some of them showed erosion and ruts in homeowners’ yards.

“The language implies that if you park outside of your driveway then you can be cited, but from what I hear you say looking at those images, it’s more of a matter of if you’re creating an erosion issue in the yard,” Lowery said, “So is there a way for this to reflect that language?”

Lowery said people are going to be upset to think that they can’t park in their own yards.

One of Gaunce’s concerns is that if people stop parking in their yards they may start parking in the streets causing more vehicles parked on the roadways, which could create a whole different problem.

Pena said oftentimes she sees properties with inoperable vehicles parked throughout yards and driving around those causing damage to the yards.

City Attorney Danny Basil asked Pena if the language in the proposed amendments mirrors language in the national code and if the wording is also used in other cities such as Bowling Green and Louisville.

“Yes it is,” Pena said, “I checked close cities that were larger than us such as Bowling Green and this is the way their ordinance is worded.”

Councilman Terry Bunnell said it would be impossible to maintain a consistent enforceability leaving potential violations up to interpretation.

“I just see that we’re, we’re trying to put a burden on the citizens that we really can’t enforce on a consistent, reliable basis and it’s left up to interpretation,” Bunnell said after explaining what one person views tall grass may not be tall to another person.

Currently, an ordinance is in place that requires grass length to be no taller than eight inches in height.

When it comes to placing upholstered furniture outdoors, Pena said she considers that to be a safety hazard due to rodents, insects, and mold.

Councilman Joe Trigg said for those individuals using upholstered furniture outside, “They’re probably doing the best they can and we’re trying to say to them now, ‘Hey, you got to change your standards’ and really not doing anything to help them change their standards.”

Trigg said the amendment proposals are crossing every line for him, especially as a home/property owner.

Abby Medford, a board member of the Code Enforcement, said Pena’s job for the city is to maintain it in a way that Glasgow can be “functional and attractive for all of us.”

“What she is doing and the reason that we as a board ask her to identify some of the gaps and then we as a board would look at increasing kind of the scope of the ordinances,” Medford said, “These that are before you tonight is where she doesn’t have an enforceability issue.”

Despite code enforcement’s many attempts to sway councilmembers, Honeycutt wrapped up the matter before the vote stating, “Even if they paint their house pink and purple, they have that right.”

The council voted down the proposed ordinance amendments 7-2. Those in favor: Marlin Witcher and Freddie Norris. Those who opposed: Marla Kirkpatrick, Lowery, Neal, Trigg, Bunnell, Gaunce, and Honeycutt. 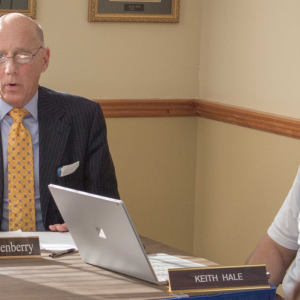