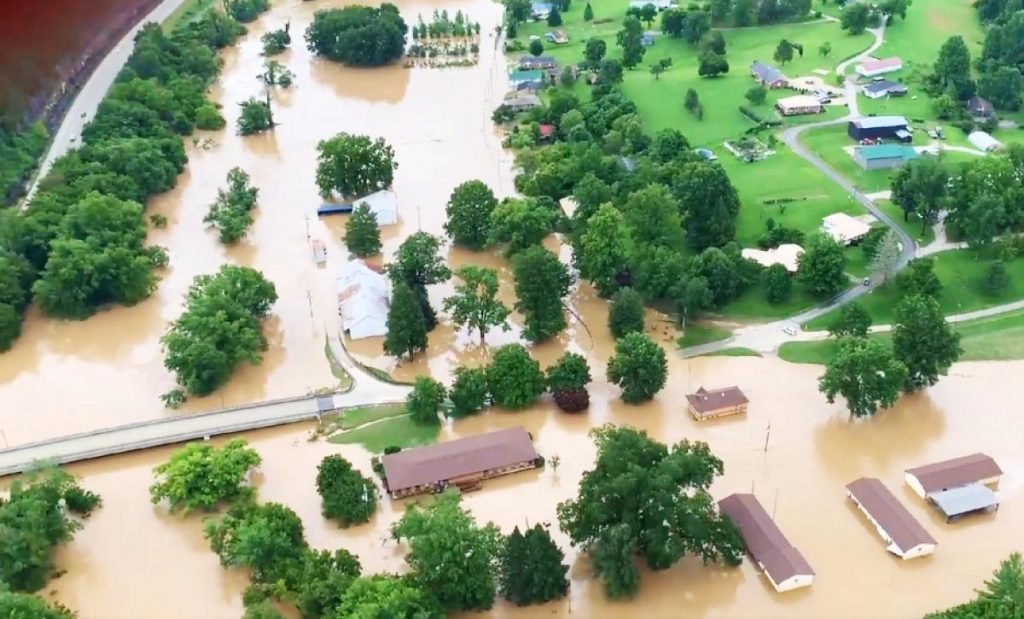 Last week, heavy rains that drenched Eastern Kentucky brought with it one of the most devastating flooding events in the state’s history.

As of July 31, the flash floods had taken the lives of at least 26 people, including children. As search and rescue efforts continue, that number is expected to rise.

From small towns to deep-rooted hollers, flood victims have lost homes and businesses, family heirlooms, and mementos, as many are left with nothing more than the clothes on their backs.

For mother and grandmother Tisha Stewart, the flooding has been a stark reminder of how quickly life can change for those she loves. 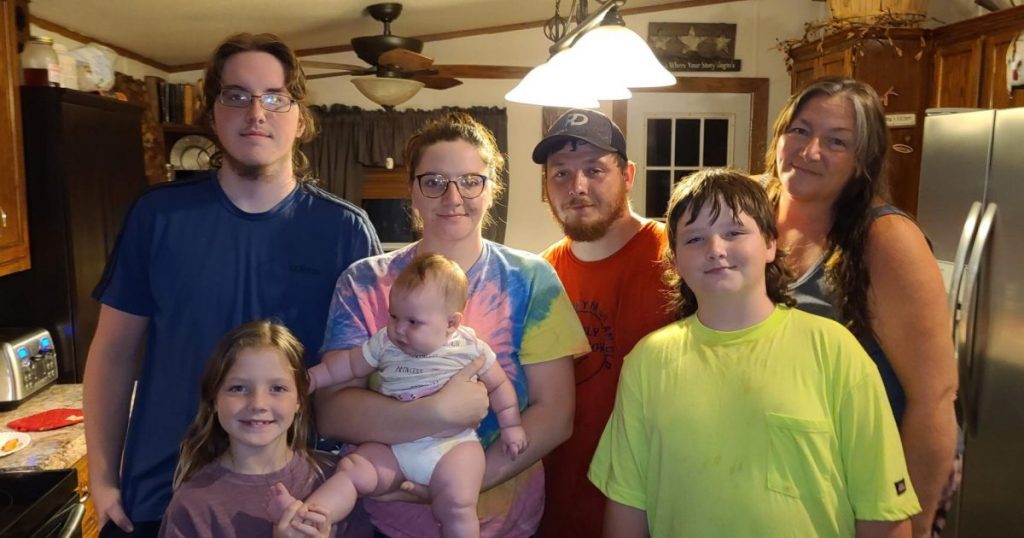 A native of Minnesota, Tisha moved to Eastern Kentucky 36 years ago. She currently resides with her husband, Jay, in Whitesburg in Letcher County, located along the Kentucky-Virginia border.

Although Tisha and her husband did not receive any flooding or damage to their home, Tisha’s daughter, Kara Conn, and her family were not so lucky.

It all began with rain that had been hitting the area in the early part of last week. The ground, Tisha explained, was already saturated before the heavy rainfall came on Wednesday night.

“It had been raining for the past couple of days, but that night it was a constant downpour, and then it just didn’t stop,” Tisha said. “It just kept raining, and we could hear it raining quite hard at times.”

Next came the emergency text in the early hours of Thursday morning, warning those in the area of possible flooding.

“My daughter lives beside the river, so she actually gets that (warning text) all the time, and nothing ever happens,” Tisha said. “…Everybody that lives along that river gets it all the time, and it never hardly floods. If it rains, sometimes it gets close to their house…(but) it’s never happened.”

“I had sent her a message actually before our cell service went out, on SnapChat, and I was like, ‘How’s high your water getting?’ And everything was fine around 1 or 2 o’clock (in the morning),” Tisha added. 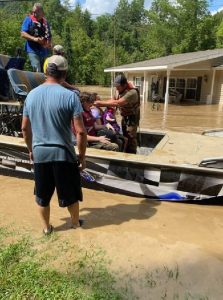 Cody Conn, far right, places ear muffs on his wife, Kara Conn. Kara, along with her children, in-laws, and brother, were rescued from the top of a hill where they were stranded for 10 hours. Photo submitted.

On Thursday morning around 5 a.m., Kara’s husband, Cody, left their home on Whipco Hill in Whitesburg to head to work. The water was not high at that time. Tisha knew that her son-in-law would never have left his family if he felt there was a serious threat.

But soon after, the flooding began. Kara’s mother-in-law came to Kara’s home and knocked on the bedroom window to wake her up. With Kara was her three children, ages 10, 8, and 4 months. One of Tisha’s sons, Judd Stewart, was also staying with Kara at that time.

Immediately, Kara jumped out of bed. The electricity was still running and the heat pump was almost completely submerged, but Kara could still hear it turning on.

“They started grabbing things, like guns and clothes,” Tisha said. “The house started making noises. Like underneath the house, you could hear stuff pulling away, and she told her brother, she said, ‘We gotta get out of here.’ They went over to her mother-in-law whose (house) wasn’t as far underwater yet and sat for about 20 minutes. Then the water started getting up to their waist, and they had to slowly make their way up to a hillside, and that was by 7:30 or 8 o’clock (in the morning).”

“In the meantime, I live about five miles from her, and we didn’t have cell service, and we were trapped in the holler,” Tisha continued. “We didn’t know what was happening. We had heard from somebody that her husband, Cody, had went to work, so I thought that meant that everything was okay. I actually had a sense of calm, and I didn’t worry like I should have.”

As the day progressed, Tisha realized the severity of the situation. 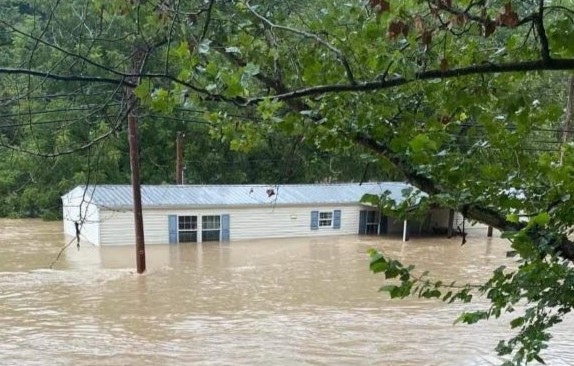 The home of Cody and Kara Conn in Whitesburg, Ky., was flooded. The water continued to rise and reached its highest peak approximately an hour and a half after this photo was taken. Photo submitted.

“We couldn’t get out of the holler,” Tisha said. “There’s many different ways from where my house is. My house is the last house in the holler. You can go like three or four different ways, but it was all trapped. It was all underwater to where we couldn’t leave.”

“When I realized how high it was, I was like, ‘Oh no, this is not good,’” Tisha added. “I started getting more worried and more worried. It was like I could just sense…I got more agitated and nauseous like I need to hurry up and be somewhere else.”

By 2 p.m., cell phone services had returned, and a few roads began to clear as some of the water receded. Tisha finally received a call from Kara, who had been sitting on a hillside for 10 hours with her children and in-laws.

Kara’s husband Cody was also with his family on the hill. When he heard that flooding that had hit in the area of his home and that some people were trapped, he did all he could to make it back to his family.

“He (Cody) actually did have to park at Fraziers (Farmers Supply) and climb up the mountains and walk through blars (briars) to get to where their house was, because by then it was already unpassable, but he knew how to get there…He said it was really blarry (briary)…It was up the side of a mountain, but he was gonna make it no matter what,” Tisha said through tears.

“One of my sons (that was over in Virginia) had come up the road…and we all just jumped in the vehicle and went to go to my daughter’s,” Tisha continued. “…I grabbed some life jackets and some rope just in case. I didn’t know what we were getting into…On the highway, there was a car submerged, and two people had drowned in the river…I mean, it was just terrible.”

By approximately 3 or 4 p.m., the water was receding fully in that area. Kara, Cody, and their children came home with Tisha. 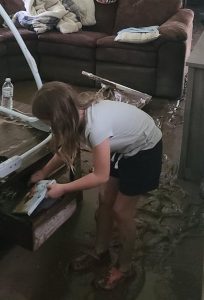 Kynlee Conn, age 9, sloshes through mud to search through drawers at her home after flood waters receded. Photo submitted.

On Friday, July 29, the families made their way back to Kara and Cody’s home to assess the damage.

“We went through stuff. Everything that’s not above probably chest height is destroyed,” Tisha said. “The only things that aren’t destroyed are the things that were on the walls and up in the very top cabinets…Everything is so filled with mud at their house…We could see that the blocks were washed out (on their home). If it would’ve been a little bit longer, it would’ve started floating down the river.”

“I’m sure my daughter feels hopeless because all of her stuff that she accumulated for the past years that she’s been married, it’s all gone,” Tisha added. “I hate it for her, that she’s going through this, but I keep trying to be positive.”

Kara’s in-laws lost their entire home and their vehicles.

“It’s everybody along the river, everybody that was down at that level (who lost everything in that area),” Tisha said. “Because it was like a lake. It didn’t even look like a river. It looked like a lake…People that we know are (still) trapped on top of the mountain and can’t get down. Even though the water’s gone, it’s continuing. It’s still happening.”

As days pass, Kara continues to share with Tisha additional details of what she experienced the day of the flood. 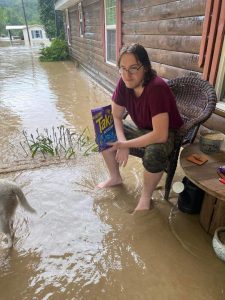 Judd Stewart, age 16, sat on the porch of the home of Michael Conn after evacuating his sister’s home. Not long after, this home was also evacuated due to rising flood waters. Photo submitted.

“(My daughter) tells her story of what the day brought her, sitting on the side of the hill and being in the rain with her breast-feeding baby…sitting there in the grass and the rain, and then it got so hot the baby got sunburned…Watching her house, she could see her bed floating through the window….Her telling me this stuff, it just made me realize that I was not there,” Tisha tearfully explained. “Because every mother thinks, ‘Oh, I will get to you.’ That’s what everybody thinks…But that may be why some people drowned, because they were trying to get to other people, so it’s quite torturous to think about now.”

Tisha stated that she had heard of deaths in the area, such as a couple who had lost their lives when their car became submerged in the river. She has also heard of others who became trapped in their homes and drowned. Yet another person, she was told, was pulled out of the river the day of the flooding.

But what the 51-year-old does know for sure is this: she is so very thankful that her family is now safe. Kara, Cody, and their family are now staying with Tisha.

“We have enough room for them to stay as long as they want to,” she said. “I’m fine with that…But everything happens for a reason…They obviously weren’t meant to stay there. They’re obviously meant to have a new chapter, so we’re trying to keep the positive, not dwell on the negative.”

On behalf of Jobe Publishing, Inc., our thoughts and prayers are with those who were devastated by the floods. Today and always, we stand in solidarity with our fellow Kentuckians. We are Eastern Kentucky strong. 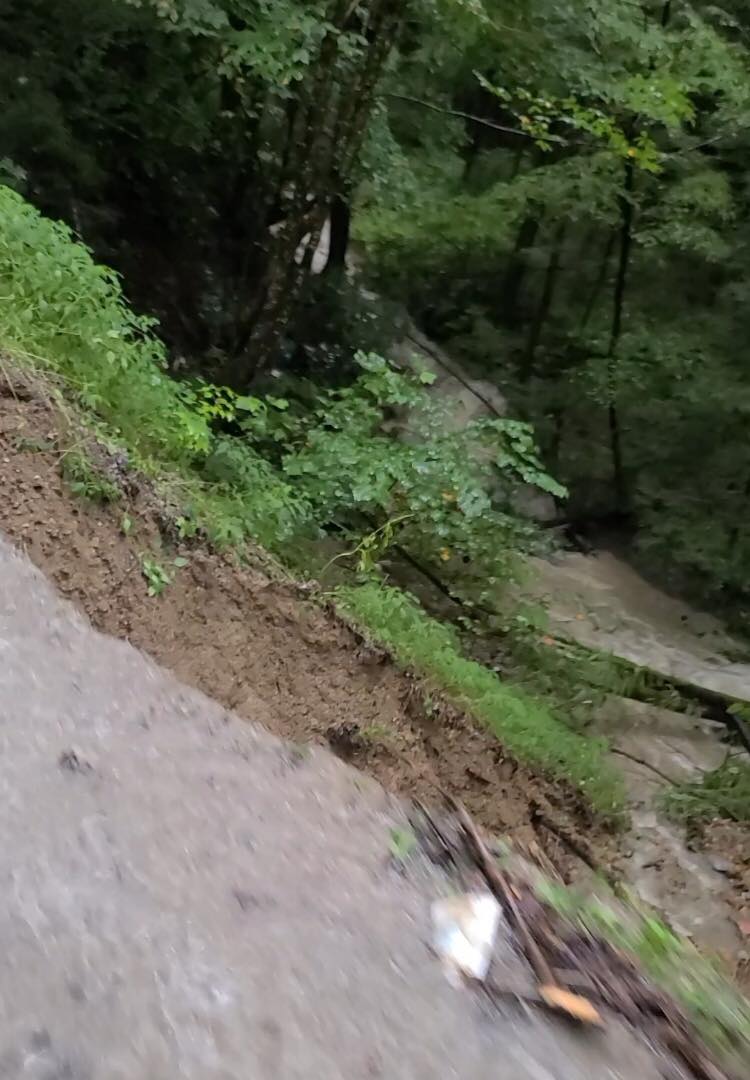 A road near the home of Tisha Stewart began to break apart after being damaged by the rushing flood waters. Photo submitted. 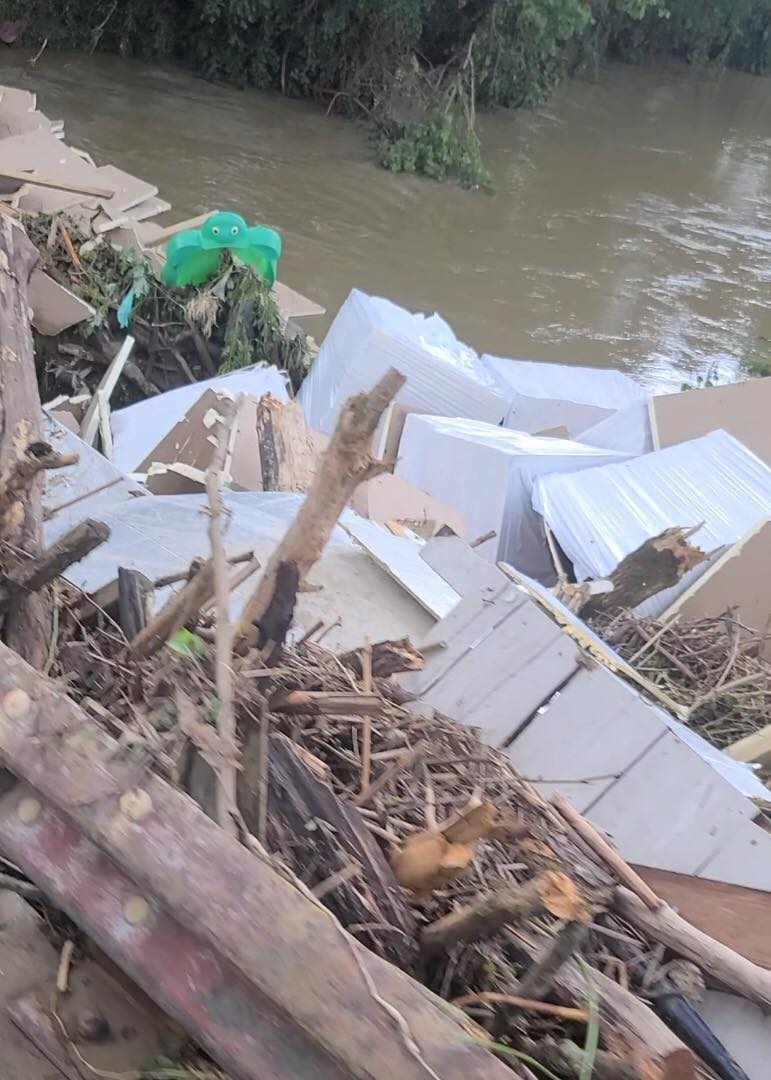 Debris was jammed underneath the bridge that Tisha Stewart had to cross to get to the home of her daughter, Kara Conn. Photo submitted. 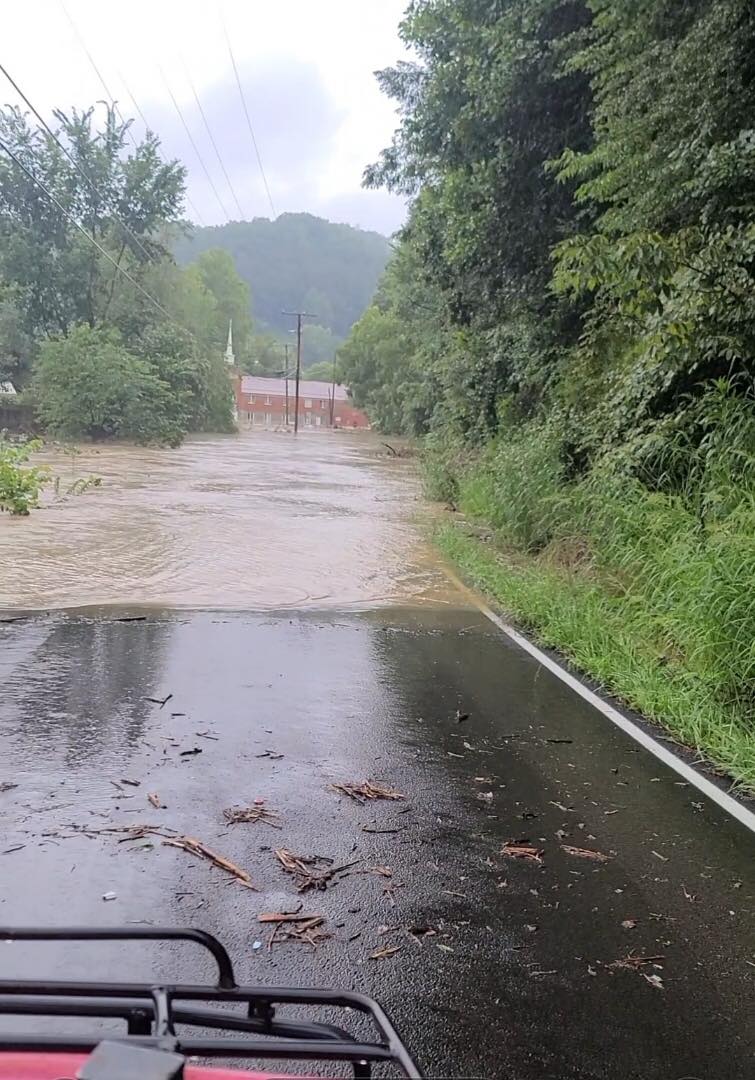 Pinecreek Road, the main road to get out in Mayking, Ky., was partially covered by the flooding. Photo submitted.