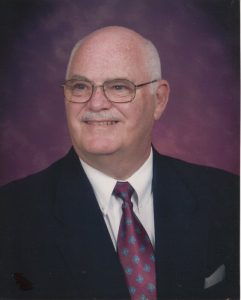 Samuel Allen Chambers (Sam) was born May 20, 1938, in a small town in Kentucky called Glasgow that was settled by the Scottish people in the 18th century. Allen was very sports-minded playing all sports football, basketball, and track.

After finishing there, he was sent to the 2nd Air Force in Lake Charles, Louisiana. Due to heat and humidity, he had to be reassigned to a base in England. Building back England in the late 50s, Sam spent four and a half years in England supplying the medical supplies that were needed for each hospital. After leaving the Air Force, he then went home to take care of his mother who died of ovarian cancer in 1964.

Allen attended Murray State College for a short period, after which he was hired by Genesco Shoe Company in Nashville, Tennessee. He was assigned the southern territory including Arkansas, Mississippi, and part of Texas; winning many trophies and awards. Later he joined with Nurse Mate Shoe company in sales and marketing the new colored shoes for nurses, spending five and a half years there before joining the Red Wing Shoe Co. in the south. Working with large gas companies like Exxon, Shell, Phillip 66, etc. offshore drilling in the Gulf. Also having retail stores in several larger cities, he was awarded the top sales of 3 million dollars. After much-needed back surgery, he retired, moving to Louisville, KY.

Sam was always interested in cooking and world traveling in several countries around the world. He went to work as a cook for Casar in Indiana. Sam was taken in by a master chef, Scott Koin, he was trained for 4 years and received his Chef status. Sam and Scott earned many awards for Casar. Sam was diagnosed with leukemia in 2003 and advised to move out west to a warmer climate. He loved to fish and spent many happy days fishing in Kentucky lakes and the ocean. He could catch fish when no one else could. He passed away May 17, 2022, in New Mexico. He was preceded in death by his mother, Nannie D. Ferguson; father, Sam Chambers; and 1 sister, Sue Wilson all of Glasgow, Kentucky. He was a member of Windmill Cowboy Church.

He is survived by Elsie, wife of the home; 4 step-children, and their families in Hatch, NM; one daughter, Lisa Pack of Glasgow; two granddaughters and one great-grandson; two nephews, Kevin Wilson and family, and Alan Wilson and family; one niece, Donna Wilson Patterson, and family of Glasgow.