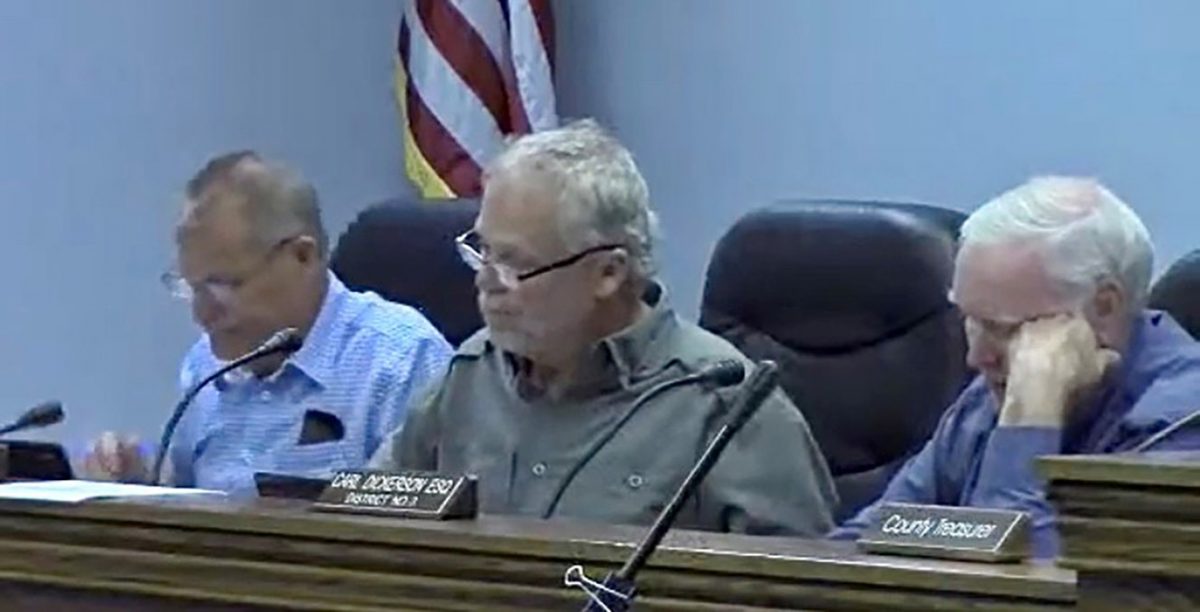 Barren County Magistrates Trent Riddle, left, and Carl Dickerson have recently brought concerns to the court in regards to healthcare workers. Some have been omitted and the motion to process the ARPA funds is not what they approved.
Photo/screengrab/GEPB

Healthcare workers in Barren County will have the opportunity to receive ARPA funds, also known as “premium pay,” in the near future if they have not received any yet.

Trent Riddle, Chairman of Barren County’s American Rescue Plan Act (ARPA) committee, announced last week to the fiscal court that since some healthcare workers were overlooked, a plan has been spurred to provide premium pay for those left out.

Riddle pointed out those healthcare workers who were left out “performed the same duties and done some of the same jobs as some of those that got paid or received benefits.”

Krista Steenbergen is contracted by the county to assist in ARPA-related matters. She will draft a new document with language explaining the process for those in the healthcare sector to apply for ARPA premium pay funds. It is expected the document will be presented to the full fiscal court before printing in the Barren County Progress as a legal advertisement.

However, Riddle said a cutoff date would be established, and once passed, no further healthcare sector-related ARPA funds would be considered.

Over a span of several meetings in late 2021, magistrates and Barren County Judge/Executive Micheal Hale hashed out details in how to deal with the distribution of the funds across the county’s healthcare employees who worked during the COVID-19 pandemic. Some magistrates considered divvying out the checks through the court while others and Hale thought it would be best to let T.J. Samson handle the fund distributions.

Last December, representatives from local sectors in the county addressed the court on the dire retention of employees and planned to use the premium pay to help retain their employee base. Those who were present included T.J. Regional Health CEO Neil Thornbury, Chief of Human Resources LaDonna Rogers, and NHC Healthcare Administrator Denise Billingsly.

During past discussions, some magistrates questioned who exactly would be eligible for the funds. 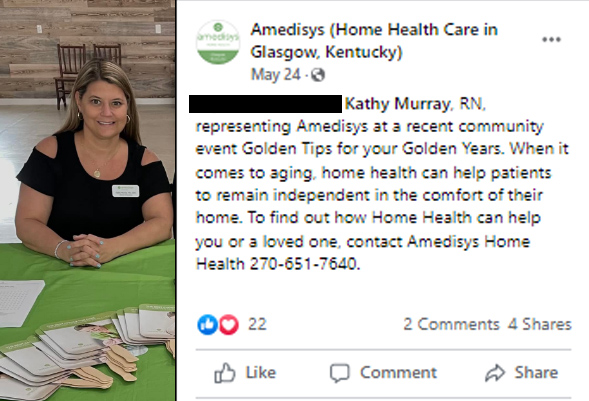 An online photo showing Kathy Murray is an employee for Amedisys. TJ Samson confirmed she was the contact for the premium pay distribution for the company. The company was never discussed nor authorized by the magistrates to be added to the contract. Krista Steenbergen, has been hired to administer the ARPA funds. She was asked via email and text how Amedisys was added to the list outside the motion the magistrates approved.

Prior to fiscal court, Tuesday morning, the ARPA committee met, and significant discussions were held in trying to understand why months of discussions, agreements or the actual motion approved didn’t make it to the document signed by Hale.

Magistrate Carl Dickerson said, “I’m amazed this got messed up—we all knew exactly what we wanted but it isn’t what we got.” He said he personally questioned Amedysis Home Health being in the contract and how they got on the list as well.

Magistrate Tim Coomer asked Judge/Executive Hale if he thought the distribution of funds was handled correctly. Hale never responded to that particular question, but said he has names of some healthcare workers that have been left out and need to be paid “irregardless of how this (contract) was written.”

Coomer approached once more with regard to how the funds were distributed, “So you don’t think it was administered correctly, right?”

Hale replied, “I’m not on trial for anything,” and refused to answer Coomer’s specific inquiry. It isn’t certain who prepared the contract in which Hale signed and was provided to Thornbury.

Riddle said he was upset about the unfair distribution, but he plans to move past it and make it right for those who didn’t receive the benefit.

He reiterated the ongoing prior discussions, “We’ve always talked about, from day one, we talked about 1,800 to 2,000 healthcare workers, $500 a piece.” Likewise, Coomer said upon reviewing his notes from previous meetings, $500 was also the estimate per healthcare worker based on the original estimate of workers.

In the December meetings, Hale told magistrates he anticipated approximately 1,800 healthcare employees and his recommendation “would hit all sectors.”

The highest estimate of healthcare workers that could be eligible was noted in court at 2,100 in April, again a number coming from Hale. The $500 amount referenced by Coomer is how the court came up with the $1M earmark.

Dickerson has asked several times who would be included and stated the court has the responsibilities of looking at the whole group as opposed to “picking and choosing” who receives the premium pay funds. The same ARPA Committee had to clean up a mess involving county employees proposed by Hale.

In April 2022, the court voted to issue a check to T.J. Samson Community Hospital. Subsequently, Hale and Thornbury, which provided specific details including how T.J. Samson Hospital was to disburse the funds, signed a written contract on April 26.

The contract does not specify any particular employee counts, amounts per employee, or any breakdown of the one million dollar amount.

The contract also lists criteria required for eligible employees, which include employees must have worked from March 13, 2020, until March 13, 2021, in person, and still be employed by the same entity on the date of fund receipt.

Dickerson said Amedysis Home Health was never mentioned in the original motion and called it a “double standard” to use a motion in varying aspects. The magistrates did not see the document signed legislating the $1M. The clerk taking minutes, the ARPA administrator or the judge-executive didn’t catch or permitted a contract to be edited to include a company that was not mentioned in the approved motion.

For clarity, this was Riddle’s exact motion extracted from the April 19, 2022 meeting. It was unanimously approved.

“Walk back just a second and talk about the court approved one million dollars for the healthcare workers to be distributed amongst the Barren County healthcare workers. There’s about 2,100 of them—something like that, isn’t it? …Um, a little over 2,000 healthcare workers that would receive the funding? (Looking at Krista Steenbergen who replies: “Yes, absolutely.”)

“T.J. Samson Community Hospital along with guidance from LaDonna Rogers has agreed to administer this—which means that they’re willing to take care of all the finances and we write them a check and then they distribute the check. Graves Gilbert Clinic, all the nursing homes in Barren County—the healthcare workers that work there, and T.J. will be eligible. There’s about 2,000 of them.

“Now, the agreements are all out there. We gotta get the agreements signed when we pass off the checks. We’re ready—the long and the short of it is—we’re ready to write T.J. Samson a check for one million dollars to be distributed amongst the 2,000-plus workers in Barren County and I make a motion that we move forward with that today.”

Last month, Dickerson and Riddle concurred that until the healthcare sector is “cleaned up” they would not consider approving any other ARPA-related funds.

Riddle said on Tuesday regarding an upcoming rough draft for advertising, “We need to see what we discussed today in written form so we can approve it…Going forward, I want to see it before I sign it.”

* Editor’s Note: The BCP has confirmed the contact person for Amedysis is Director of Nursing Kathy Murray. Murray is the 1st cousin of Judge-Executive Micheal Hale and wife of Hale’s hire Maxie Murray to run the Barren County Park and Recreation Department.
* As of press-time, ARPA administrator Krista Steenbergen hasn’t responded to requests of how the company got added after the motion approved by the magistrates or who suggested including the company. 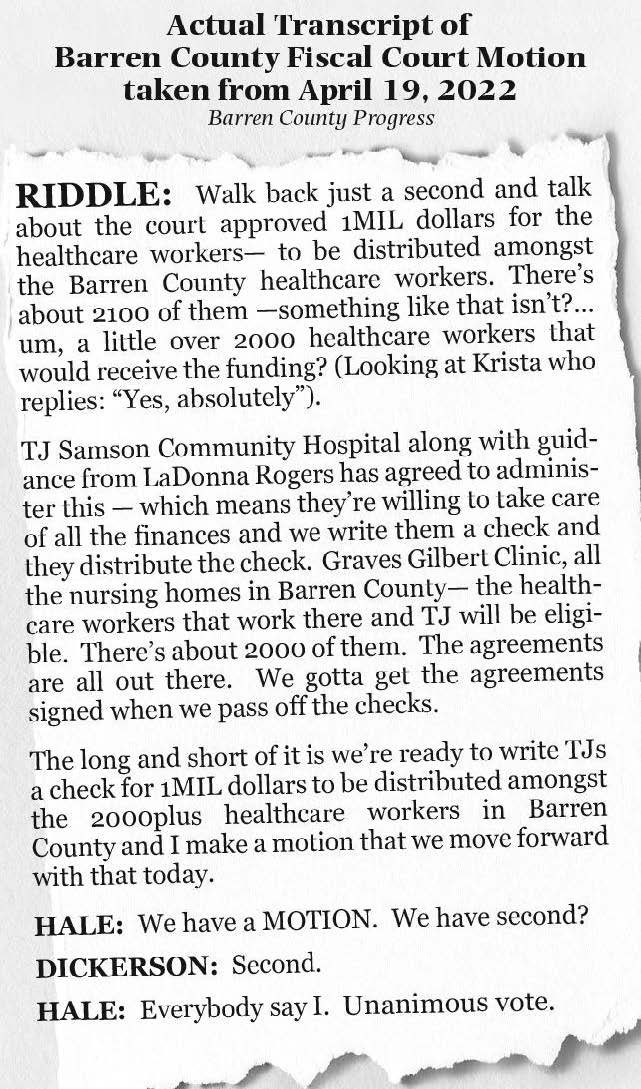 Transcript showing motion never mentioned Amedysis. Yet, the company having Hale’s first cousin as Director of Nursing, and contact for dispersement was added.