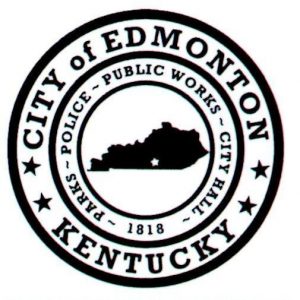 The Edmonton City Council held a special called meeting on Monday, July 18th, with all council members in attendance.

During the Water, Sewer, and Gas Department Report presented by Superintendent Moe Hensley he stated that the sewer and gas lines have been completed at the Industrial Park (the Pennington Stave project).

Administrator Fred Ray presented the ABC report, “Everybody has paid the regulatory fee except Walgreens and the Mexican Restaurant and I’d say they’ll be in, in a day or two.”

Edmonton Memorial Park Director Brian Garrett noted that the school has purchased a new football scoreboard with two clocks on either side and it has been installed at the park.

City Attorney Brian Pack recommended a closed session to discuss possible litigation. After approximately 30 minutes the council returned to an open session with no action taken.