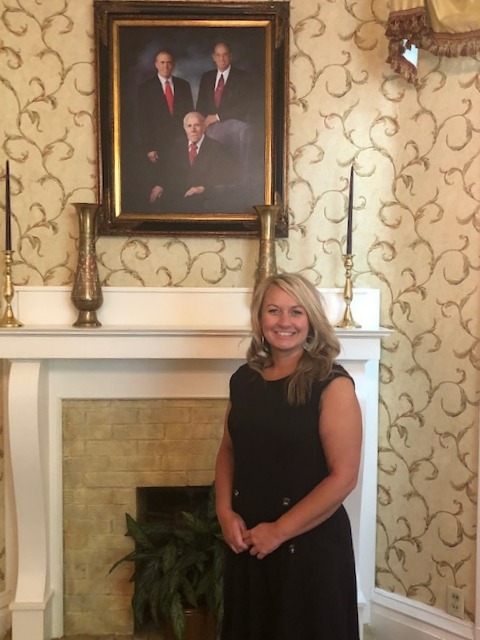 It’s a subject no one ever wants to talk about – funeral arrangements. Yet, we all know it’s a fact of life that someday we or a loved one will pass and arrangements must be made.

“I started out temporary, just to help dad (Larry Wilson). When the Butler’s sold, of course, they left. I came to help him until he could find help…it was when Covid hit. So as I was filling in temporarily, I found a passion for it.”

A couple of months into helping her dad, she told him that she felt like she was the right person for the job, so she spoke with the new owner, Nathan Morris of Morris Family Services who signed her up for an apprenticeship to work toward becoming a licensed Funeral Director. “That’s how I landed here and became full-time,” Amy stated.

The job is very emotion-based and Amy related that everyone does not deal with grief the same way. “You see some people and they come in and they’re mad. They’re mad at you! And that’s ok. Then you have people that come in and they’re just totally heartbroken…they need your guidance. And then you have people that come in…and they’re numb. Everybody’s different. It’s a very emotional job, even for us.”

Covid even changed the way families dealt with grief, because it limited families from having full services. The results of those limitations are still evident in what is being chosen today. Families are now choosing less visitation time and many more graveside services. Another factor is inflation. Cremation is chosen more often these days, because it costs less. However, even that cost is rising. Cremations are not outsourced. Morris Funeral Services has its own crematorium at its Owensboro location.

Many people never think about funeral arrangements until they are faced with the need for them. Amy stated, “You think more. You think differently working here. And now that I work here, I know what I want.”

Some family members know exactly what their loved ones want, because they have made their wishes known prior to their passing. According to Amy, “It takes a burden off the family if they know what you want. They don’t have to worry and think ‘am I making the right decision’ if they know what your wishes are.”

When asked what she would like to tell everyone, Amy said, “Be prepared. Let your family know what you want. I think being prepared is the biggest thing. Live life to the fullest, because life is short.