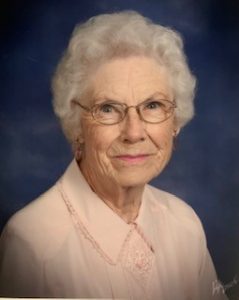 GLASGOW – Rosalie McCuiston, age 98, died Thursday, July 21, 2022, at her residence. She was born on January 9, 1924, in Mortons Gap, KY, to the late Joseph Smith and the late Bertha Carloss (Fort) Smith. She was a homemaker and a member of the First United Methodist Church. She was married to the late Forrest Thomas McCuiston.

In addition to her parents and husband, she was preceded in death by one daughter, Suzanne Bradley; one brother, and three sisters.

The funeral services were held Sunday, July 24, 2022, at A.F. Crow & Son Funeral Home with burial in the Glasgow Municipal Cemetery.

The family wants to give a special thanks to her four caregivers whose care allowed her to remain at home.

In lieu of flowers, the family requests donations be made to Kid’s Hope at First United Methodist Church, South Green Street, Glasgow or the Mary Wood Weldon Library in Glasgow.

A.F. Crow & Son Funeral Home is both honored and privileged to be entrusted with the care of Mrs. McCuiston.