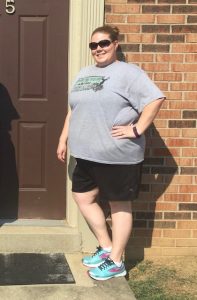 Kristin, before and after her lifestyle change. Photos/ Kristin Crouch 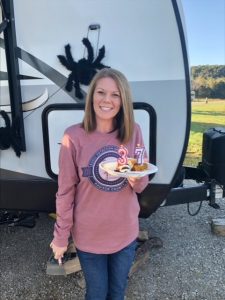 When asked to give one word to describe how her weight loss journey makes her feel, Kristin Crouch said “alive”.

The 37-year-old Glasgow resident and employee of the Metcalfe County school system says her path has not been linear, but she is glad she never stopped.

“This process, my journey, definitely hasn’t been a straight line from point to point, there have been many bumps along the way,” said Kristin.

Kristin says that her struggle with weight has been lifelong.

“I’ve been overweight most of my life. Since college, I’ve lost weight and gained it back several times. I think I just finally reached a point where I was tired of my weight limiting and controlling what I could do and frustrated with being uncomfortable in my body. I wanted and needed a change,” she said.

“I either never made it to my goal weight, or I’d hit it and just end up going back to unhealthy habits and the pounds lost would return. More than once I ended up gaining back more than I had lost,” she said.

Although the journey had many starts, it was near the onset of the pandemic that she chose to start again and stick with it.

“January 2020 is when I stepped on the scale to get my starting weight again. I kept telling myself this was it, I wasn’t going back this time,” she said. She added that she knew she was in need of a big change that required a complete lifestyle approach.

And that is exactly what Kristin did, resulting in huge and lasting accomplishments.

“For the past year, I have been maintaining my goal weight. In the past maintaining was always a struggle for me.”

“I have been at or below that weight for almost a year. Maintaining was always my downfall in the past. I believe it’s just as much work to maintain your weight as it is to lose it.”

She says that the difference on this leg of the journey has been more inward than outward.

“I’ve really had to work on my mindset and believe that I can maintain a healthy weight long term. Not successfully maintaining in the past doesn’t mean it will happen again. It’s a lot of work but it’s worth it! I feel so much better and remind myself of that often,” said Kristin.

When beginning in January 2020, she had not only a change of mind about the approach, but a very specific path she was determined to take.

“I first started by logging my food using the MyFitnessPal app. Portioning my food and being mindful of the calories I was consuming,” said Kristin.

“In July 2020, I started really looking at my food choices. I had just been focused on my calories, but began paying attention to my macros (carbs, fat, and protein). And realized I was eating a lot of carbs. I definitely have a sweet tooth and love all things bread! I began making some small changes and adding more protein-rich foods into my diet. I started to lose more weight, but I also just felt better overall.”

Diet was half of the equation, and the other half was activity.

“I was inactive and not exercising on a regular basis, just the occasional walk here and there. So my fitness goal, in the beginning, was to hit 10,000 steps at least 3 days a week. I went to the Wellness Center and usually walked on the treadmill or did the elliptical machine. Throughout this journey every 6 months or so I have looked at my goals and revised as needed. After 6 months of hitting my steps 3 days a week I increased that to 4 days a week and then after another 6 months 5 days a week,” Kristin said.

Although she has encountered great success this time, it was not without adversity.

“The pandemic threw a wrench in my plans when the gyms were closed. After a couple weeks of getting out of routine, I knew I had to do something to stay on track. Mammoth Cave National Park never closed their hiking trails. During spring break of April 2020, I went out there to hike and so began my love for hiking. I tell people it saved me and I truly believe that. It kept me active when I couldn’t get in the gyms. I found I really enjoyed being outside, the challenge of hiking, finding new trails to explore, and hiking for longer distances. Even when the gyms reopened I preferred to be outside, whether I was hiking or walking,” she said.

Combining the great outdoors and exercise have been a key component all along, and have resulted in an epic adventure that probably would not have been possible without the lifestyle changes of the past two years; this summer, Kristin went on the rim-to-rim hike at the Grand Canyon.

“The Grand Canyon Rim to Rim hike was truly amazing! It’s hard to describe the experience, but it’s definitely a day I’ll never forget. Including myself, it was a group of 10 that hiked the canyon and we had two support people/drivers. We started at the South Rim around sunrise on May 30 and ended at the North Rim that evening right around sunset. We spent about 14 hours in the canyon and it was around 24 miles rim to rim.

We trained for several months leading up to the hike. Lots of climbing stairs and long training hikes most weekends. I never imagined I could take on a challenge like this!” said Kristin.

“After accomplishing the Rim to Rim hike we spent some time in Zion National Park, another beautiful place. And along with a few of my teammates, we took on and conquered the Angel’s Landing hike. It was so scary! And such an adrenaline rush!”

“My advice would be not to wait. Don’t waste years making excuses like I did. I wish I had made my health a priority much sooner. Carrying so much extra weight for years like I did has caused permanent damage to my body. I also missed out on lots of amazing experiences. You get one body, take care of it,” said Kristin.

She also says that what worked for her may not work for everyone else, and encourages people who want to take the leap find what works for them and stick with it.

“Everyone’s journey and experiences will be different. My starting points won’t be the same as someone else. While the ultimate goal might be weight loss and a healthy lifestyle, that picture looks different for each person. There is more than one way to be healthy and active and these are some of the things I found to be most helpful.”

She added finding a support network to encourage you, setting realistic goals, looking at the big picture, and being consistent is important. Also, forgiving yourself if you fall off course, I’m not using it as a reason to stay off course.

“Give yourself some grace if you get off track. We’re human.”

More than anything, Kristin stresses the importance of believing in your own journey and strength.

“Believe in yourself!” Said Kristin. “We are capable of so much more than we think. I never imagined I’d be able to say I hiked the Grand Canyon but I did it! And it was worth every minute of training and sacrifice.”

When it comes to news, whether it’s national, state or local, it seems to be burdened with badness. So, there’s no better time to dedicate some space to something positive!

This week the series kicks off with a story which came to mind immediately when I first thought of doing this series. If you have a suggestion for this series about positive/good things going on in the region, please email Jupitermoonsong@yahoo.com. 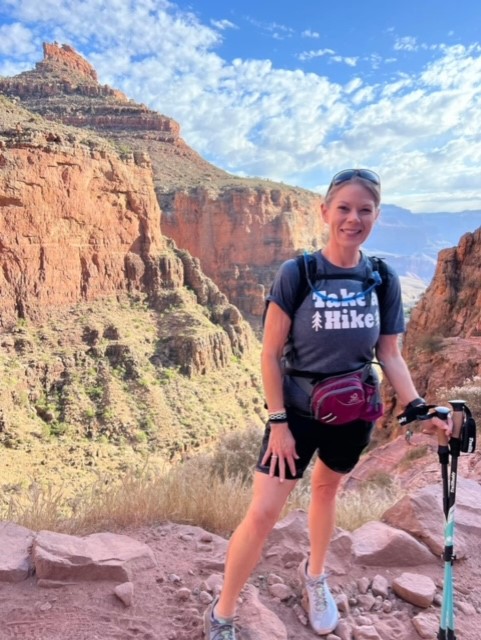 The Rim to Rim hike was the adventure of a lifetime this summer. Photo/ Kristin Crouch