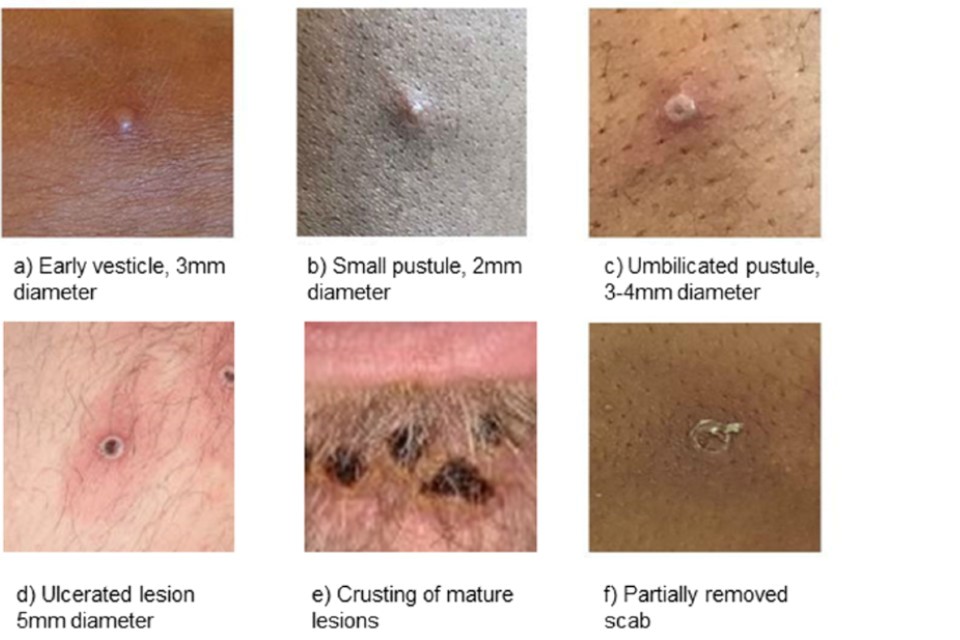 These photos show the progression of the skin rash. Photos courtesy of https://www.gov.uk/guidance/

The government is yet again publicizing news of a virus. The latest is Monkeypox. Presented here are the facts about the virus from the CDC so that you can better understand what the national news media and the government are telling you.

Monkeypox is a RARE disease caused by an infection with the Monkeypox virus. The virus belongs to the Orthopoxvirus genus which includes variola virus (which causes smallpox), vaccinia virus (used in the smallpox vaccine), and cowpox virus. The virus is not related to chickenpox.

Monkeypox was first discovered in 1958 when two outbreaks of a pox-like disease occurred in colonies of monkeys kept for research. Even though named for the primates, the source of the disease is still unknown. African rodents and primates may harbor the virus and infect people.

The first human case of Monkeypox was recorded in 1970. Since then, the virus has been reported in people in several other central and western African countries. Prior to 2022, nearly all cases in people outside of Africa were linked to international travel to countries where the disease commonly occurs, or through imported animals.

Monkeypox symptoms are similar to smallpox symptoms, but milder. The virus is rarely fatal and is not related to chickenpox. Symptoms of  can include:

The rash goes through different stages before healing completely. The illness typically lasts 2-4 weeks. Sometimes, people get a rash first, followed by other symptoms. Others only experience a rash.

Antivirals, such as tecovirimat (TPOXX), may be recommended for people who are more likely to get severely ill, like patients with weakened immune systems.

If you have symptoms of Monkey Pox, you should talk to your healthcare provider, even if you don’t think you had contact with someone who has Monkey Pox.

A person who is sick with Monkey Pox should isolate at home. If they have an active rash or other symptoms, they should be in a separate room or area from other family members and pets when possible.

The CDC does not recommend widespread vaccination against Monkey Pox at this time.