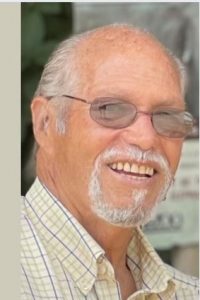 He was the third child of Ewell Clifton and Myrtle Harlow Simmons. His family moved to Tucson, Arizona in 1956. He graduated from Palo Verde High School in 1970, joining the US Army in 1971. He completed his Bachelor of Music at California State University in 1997 and his Master’s of Church Music at Southern Baptist Theological Seminary in 2001. He served as Minister of Music at a Florida church from 2001-2006.

In 1975, he married Margaret Elizabeth Elmore and had a daughter, Susan Elizabeth. At the death of Margaret in 2008, he married Karen Moyers Fitzpatrick in 2010. He was a devoted husband, son, father, brother, and uncle. He enjoyed time with his family, his computer, and writing.

Funeral service will be 11:00 am Monday, July 18th at A. F. Crow & Son Funeral Home with burial in the Cedar Grove Cemetery. Military services will be provided by DAV Chapter #20 of Glasgow. Visitation will be on Monday from 10:00 am until the time for the service at the funeral home. A. F. Crow is honored to be entrusted with the care of Mr. Simmons. Please share your condolences with the family at www.crowfuneralhome.com.