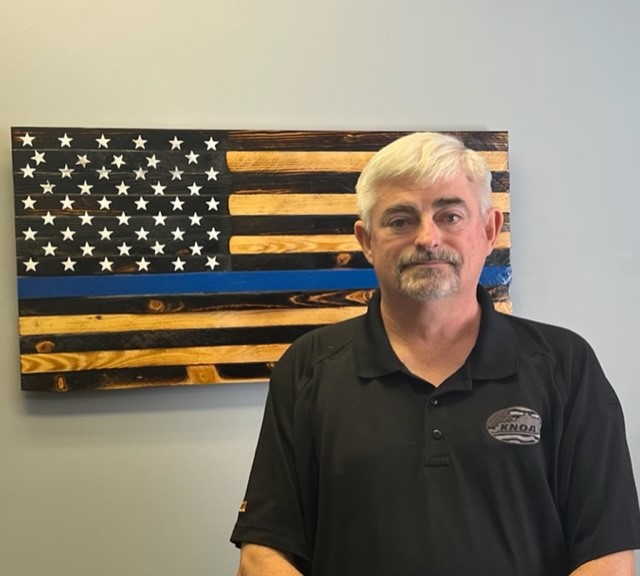 The Barren River Drug Task Force (BRDTF) Director, Ron Lafferty, started his career with the regional entity in 2004, a year after its formation. Eighteen years later, several things have evolved in the world of drug trafficking, but one thing has not. Drugs continue to pose a major problem for South Central Kentucky.

In 2014, Lafferty became the Director of the BRDTF. In the passage of a decade prior to becoming the Director, he witnessed variables in the manner in which drugs are produced and distributed. However, for the duration of his career, methamphetamine has posed the biggest problem in our region.

“In the beginning, it was the red phosphorus method, then the anhydrous labs cropped up and were a real problem for approximately eight years. Later, they made a law that you could only acquire 24 grams of Sudafed in a year, so that slowed that down. After that, it was the one-step or shake and bake method, but meth labs are a thing we rarely see now,” Lafferty said.

That isn’t because methamphetamine has diminished.

“Crystal meth is what we see now. It’s all transported into the area, and it’s a product of the Mexican drug cartel,” he said.

For drug users, this is an advantageous scenario, because it lowers the price and the risk of having a lab.

“It’s a multi-billion dollar industry in America,” Lafferty said. “I dare say the world. They distribute all over the globe.”

Speaking of distribution, driving drugs into the country is still a method, however, Lafferty says the most used method these days for getting drugs from place to place is the USPS, FedEx, and UPS.

“Once a dealer has the money, they simply put a fake return address and it makes it difficult to prosecute. One of the most recent shipments we intercepted was addressed from a convalescent home in California,” Lafferty said. California and Arizona are often locations from which packages come.

Methamphetamine is still the most prevalent, however, it is not the only drug posing a problem in the region.

“We see a lot of what we call fake pills like OxyContin and Xanax bars,” he said.

Fentanyl and Carfentanil are also trickling down into the area from larger distributors from the north.

“Areas like Louisville have had a huge rise in the overdose deaths, we’re starting to see that become a problem in our region now,” Lafferty said.

He stressed the dangerousness of the drugs, which are tranquilizers, stating that even the most infinitesimal amount, a few grains, could render a person dead.

Because of the rise in deaths caused by fentanyl, laws have altered, and now individuals who can be tracked as selling drugs and causing overdose deaths can be charged with murder or manslaughter.

“We have seen a lot of success with this in the eastern district, now we’re starting to see some over here in the western district as well. They are prosecuting these people when there is ample evidence like text messages to prove they are the seller.”

Working with prosecutors, coroners, and five federal agencies is part of what gives the task force clout. Another part of that is cultivating confidential informants, with relationships built on trust.

“We have not lasted for almost 20 years without these trusting relationships, people that work with us have to feel that they are protected and we are protected. That is the most important thing, that we are all safe,” Lafferty said.

Although getting drugs off of the streets and out of the hands of people is the number one charge of the task force, the second most important thing is educating the community about the dangers and relevance of drugs.

“I do as many outreach programs in the community as I can. If someone invites me to speak, I come and talk for free,” Lafferty said.

“When you start showing pictures, the first five or six photos, you can tell that they don’t realize that these photos were taken here. And then I explained that every picture they’ve seen came from this region, in these counties. Most people still don’t understand how many drugs there are in Barren, Metcalfe, and the rest of this region.”

Seventh and eighth graders are the ideal age for learning, however, he does these programs for younger children as well as adults.

Most recently, the task force has partnered with Metcalfe County, to expand its reach. Because drugs don’t know the boundaries of county lines, and because dealers frequently come and go between multiple counties, this helps with the success of investigations.

“I am thrilled to include another county, and offer this resource to another entity in the region. Many of the small counties are strapped for manpower, due to no fault of their own, and this way we get to help,” said Lafferty.

Although the BRDTF does its best to sniff out and eradicate drugs in the region, Lafferty is the first to admit that the problem goes far beyond the reach of law enforcement.

“There’s usually a link between mental health and drug abuse,” he said.

“This is what I tell people: if you think a family member or a loved one is doing drugs, don’t ignore it. Don’t look away. People are always afraid, because they don’t want to be a rat, but it’s much better to have someone mad at you for a few months, and you know you tried to help, rather than visiting their grave the rest of your life. That may sound harsh, but it is the reality. Lots of people in south central Kentucky die because of drugs.”

Anyone with questions, comments, or tips can call the tip lines at the BCSO, MCSO, or by calling the task force directly at 270-629-2590.

“They can also send me a message on Facebook, or drop an anonymous letter in the mail, regardless, the name will never be revealed.” 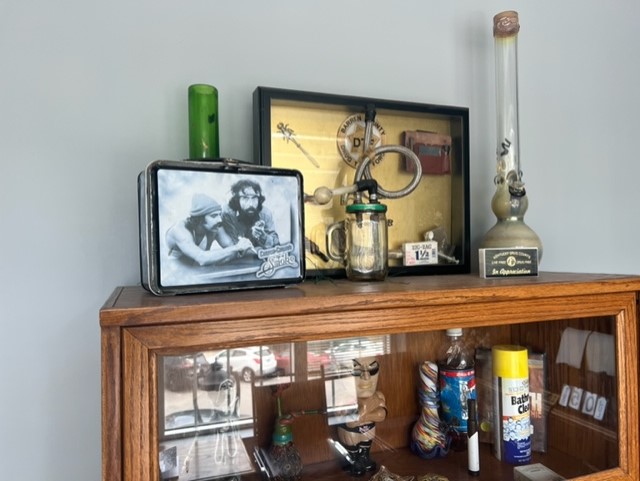 A display at the task force office of items of drug paraphernalia found through the years. Photo by Jennifer Moonsong