One citizen claims violation of freedom of speech 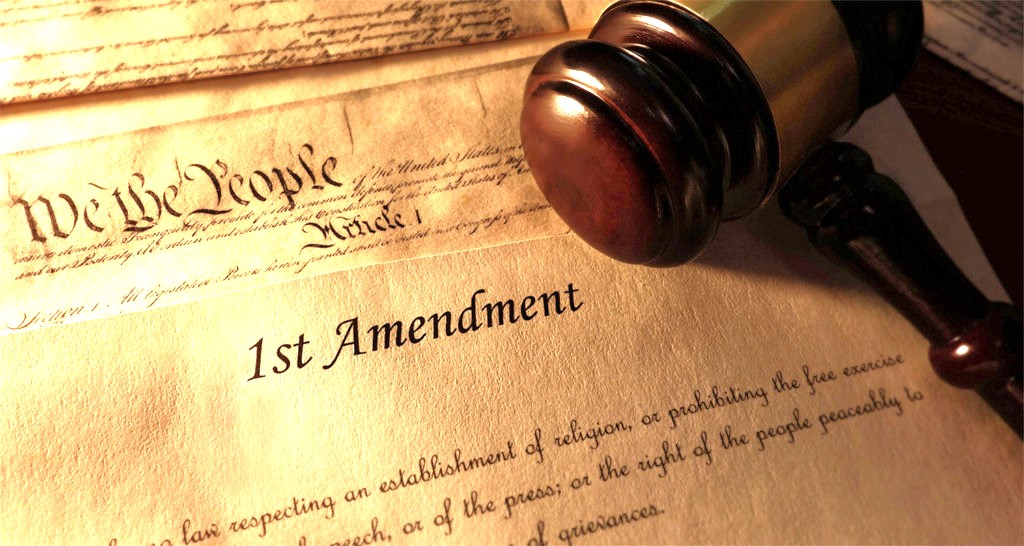 A zoning ordinance regarding signs in Horse Cave has become a controversial topic and may be found to violate freedom of speech.

Horse Cave has many questions to research and answer concerning a sign ordinance for the City.

The issue first arose during a Horse Cave City Council meeting on June 13 when Sarah Barker addressed the Council regarding an ordinance violation.

Although political signs are not specified in the ordinance, the time frames of April-May and October-November align with dates of the primary and general elections.

At the time of the meeting, Barker further stated that current Horse Cave Mayor Randall Curry, Horse Cave City Council candidate Paul Wilson, and Horse Cave mayoral candidate Terry Riley were in violation of the zoning ordinance in regards to their political campaign signs still being displayed within city limits outside of the ordinance’s specified time frames.

Barker asked Curry and others who still had political signs displayed in the City limits to remove them in accordance with the ordinance unless they had applied for and received the necessary permit.

Despite what the City’s zoning ordinance may state or what concerns Barker may have, other citizens in Horse Cave have their own concerns that may go beyond local government.

José Cabrero is one of those citizens. He believes the city’s ordinance is a violation of freedom of speech.

Cabrero, who had a sign in his yard showing his support for Horse Cave mayoral candidate Terry Riley, woke up one morning to find the sign gone. Unknown to Cabrero, Riley had voluntarily taken his signs down to avoid violating the zoning ordinance.

Cabrero has lived in Horse Cave since 2002 and stated that he had seen political signs posted for years outside of the ordinance’s permitted time frame. Cabrero referenced two Supreme Court cases –  The City of Ladue v. Gilleo and Reed v. Town of Gilbert – which he believes prove that this specific ordinance in Horse Cave is unconstitutional.

“The Supreme Court ruled that you cannot make any distinctions on signs. The rule either applies to all signs or it applies to no signs,” Cabrero said. “…(Discriminating) is what the City (of Horse Cave) is doing by having all of these different, you now, agricultural, commercial signs, saying these are okay and these are not…You cannot restrict signs based on their content…You either say no signs in the town of Horse Cave at all, and that includes all signs…Or you say, ‘Okay. You can put up signs, but these are the requirements. They can’t be this big, you know, they have to be so far away from the road.’ Those kinds of things.”

Article 5 of Horse Cave’s 2017 Zoning Ordinance – the same ordinance that puts a time restriction on political signs and requires a permit – actually allows signs with other content to be posted by new business owners, realtors, and even construction companies without having to apply for a permit.

According to the First Amendment Encyclopedia section of the Middle Tennessee State University (MTSU) website, the Supreme Court of the United States (SCOTUS) can impose time, place, and manner restriction on some forms of speech. These may include, “…imposing limits on the noise level of speech, capping the number of protesters who may occupy a given forum, barring early-morning or late-evening demonstrations, and restricting the size or placement of signs on government property.”

However, such regulations must pass strict legal tests. As stated on the MTSU website, in order for a restriction to survive First Amendment constitutional challenges, it must satisfy a three-prong test outlined by the Supreme Court in Ward v. Rock Against Racism (1989):

Pat Ross, Attorney for the City of Horse Cave, explained that there may be a constitutional issue with enforcing the zoning ordinance of Horse Cave. He referenced a Sixth Circuit decision on February 16, 2021, that declared the Kentucky Billboard Act unconstitutional.

“I found that opinion, and it reads as to the facts, in that case, were the Lion’s Den, the adult place that you can see from the interstate, had an off-site billboard painted on a tractor trailer I think,” Ross said. “The Billboard Act has an exemption for an on-site sign that just displays the business of the entity, but it doesn’t allow an off-site sign that’s visible from the interstate in an urban area with 660 feet I think…The way I read this opinion from the Sixth Circuit is that if you have to read the sign to know whether an exemption applies, it’s not content-neutral and therefore violates the First Amendment.”

In that case, Ross explained, commercial speech was involved, which historically has been treated differently under the First Amendment than political or other speech that impacts the First Amendment. However, when exploring the exercises of free speech, such as submitting an opinion editorial in a newspaper or with political expressions, then that requires the highest degree of scrutiny.

Ross also contacted the attorney for the Kentucky League of Cities. That attorney agreed with Ross’s opinion from the Sixth Circuit’s decision regarding the Kentucky Billboard Act.

“We’ve got the regulation (city zoning ordinance) directed purely at political speech, which is protected under the First Amendment. We’ve got exemptions under our regulations just as the state Billboard Act did, and you have to read the sign to know if an exemption applies, which means it’s not content-neutral and it fails this new standard,” Ross said.

“It’s my opinion that our sign regulations are not enforceable,” he added. “I guess if the candidates voluntarily remove them, that’s up to them. I don’t think that the City can constitutionally enforce these regulations based upon the holding of the Sixth Circuit…My take on it right now is that the city does not have a valid ordinance…I think that that particular section is clearly aimed at political signs which brings it under the most strictest scrutiny…and I just don’t think it can be enforced.” 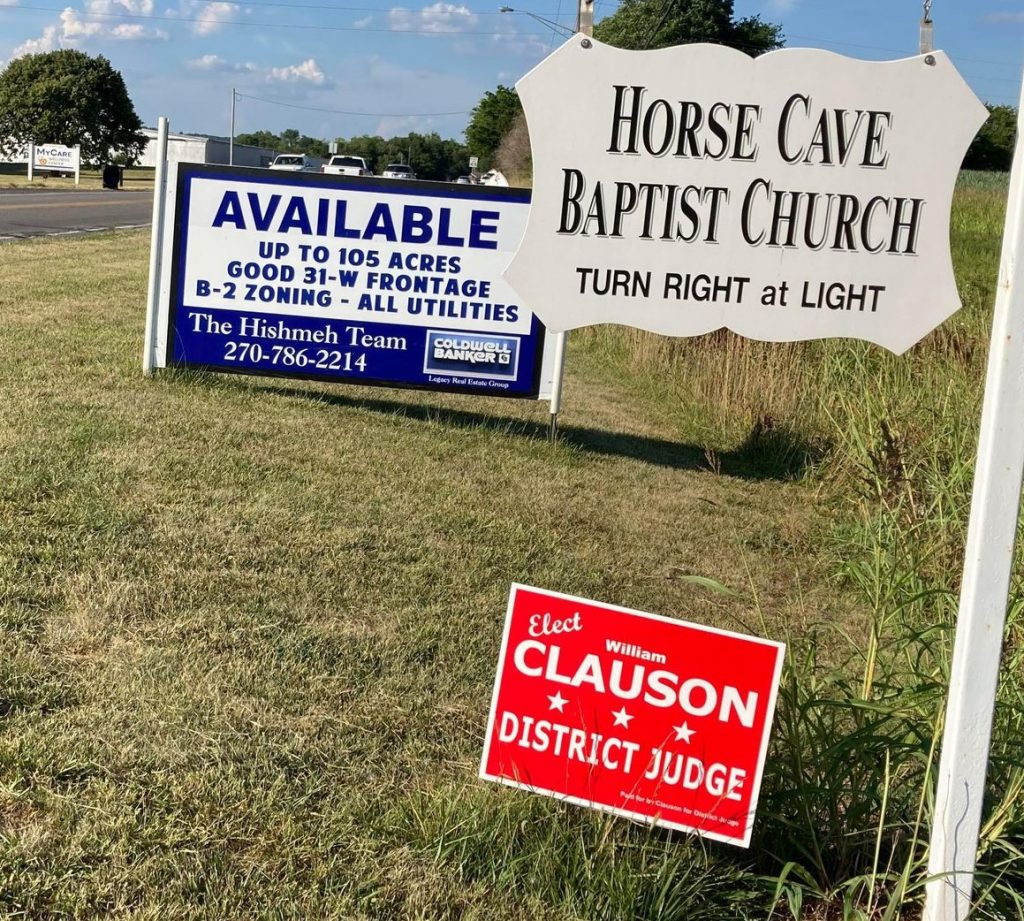 Under the City of Horse Cave’s current Article 5 zoning ordinance, political signs would only be allowed to be displayed during specific times of the year. Other signs, such as for realty companies, could be displayed at anytime. This ordinance may be in violation of one’s freedom of speech. Photo submitted. 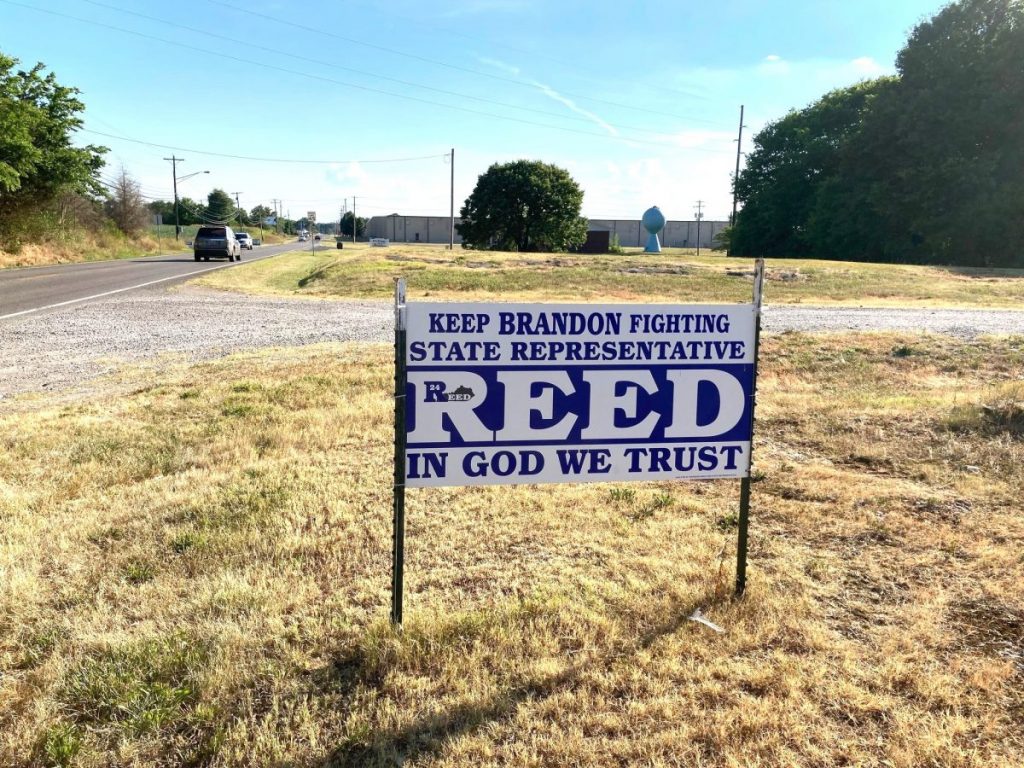 Under a current zoning ordinance, political signs like this one would either need to be taken down until a specific time frame or apply for a permit. Photo submitted.